Kylie Nicolai has been one of the top scoring players in the newly established VFL’s women competition and now her sights are set on the AFL, Thomas Odell writes 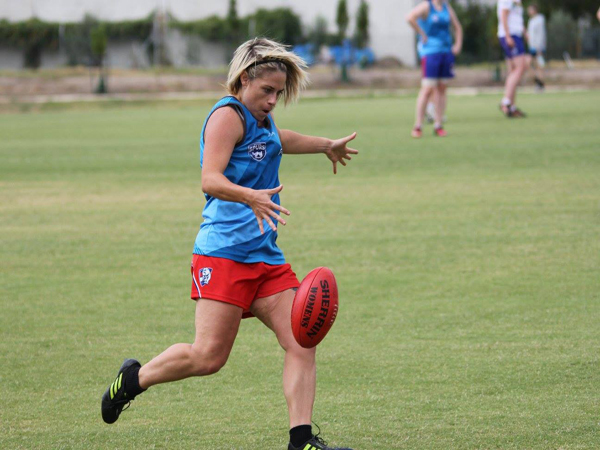 Picking up a Sherrin for the first time at 18 and making a career out of it, it’s against the grain of most sporting success stories but that’s exactly what Kylie Nicolaci was able to do.

Sporting all-rounders are multi-talented and Nicolaci already has state level soccer, tennis, swimming and football etched in her ultra-athletic CV, although her dream is to add an AFL career to that.

A youth product of the Victorian Institute of Sport soccer program, she decided to pursue a new challenge after a combination of injuries and disinterest ended her career with the round ball.

“It got a little bit stale… so I turned 18 and I just wanted to try something different and a bit more social and that’s when I found the Spurs,” she said.

The VU Western Spurs (then St Albans) took her on in 2008 as an inexperienced youngster and ten years on, she considers the club a second family.

“I’d never been around such an inclusive, supportive club before. It doesn’t matter what you’re going through in life, there’s someone at the club that can help you out, there’s a squad of 52 girls and you’ll hear from every single one of them.”

As an inspirational club custodian and one of the pioneers of women’s footy, Debbie Lee, is an exceptional role model for Nicolaci and many of the players at the club.

“She’s been a really good role model to a lot of us, just the way she goes about her football and she loves the Spurs, she loves that club and it shows. She’s still there, she’s just had a baby and she’s now coaching us.”

Her parents have supported Nicolaci and every sporting endeavour she’s embarked on.

“They were really unsure about when I made that switch from soccer to football, yet from the very first game they showed up and they’ve barely missed a game ever since,” she said.

When she started playing football, Nicolaci had to get used to the shape and size of the ball. But with the help of the Spurs, she quickly turned an unorthodox kicking style into a goal-scoring weapon.

“My kicking technique wasn’t great coming from a soccer background but I liked scoring goals in soccer and you get to score even more goals in football,” she said.

Her goal scoring record in the VWFL speaks for itself: leading goal kicker in 2011 through to 2014 with a personal best of 22. This included three goals scored in a Grand Final win over Darebin.

She’s in amongst the goals again this season, in the new VFL Women’s League, and she’s doing no harm to her chances of playing in the inaugural AFL Women’s League season in 2017.

Various exhibition matches have proven the worth of women’s footy at the national level; exposure is the key to developing it even more.

“I think the AFL is going in the right direction, I think these exhibition games have really showed a lot of people that didn’t know about women’s football how competitive we are.” Nicolaci said.

Retail manager by day, dedicated footballer by night, Nicolaci trains up to four times in the working week to keep her dream of playing in the AFL alive. But she’d prefer to play for the Magpies, of course.

“I was born a Collingwood supporter… I’d love to [play for] Collingwood, don’t think I’d be too happy if it was anyone else.”

Thomas Odell is a second-year Bachelor of Sports Journalism student at La Trobe University. You can follow him on Twitter at @tomodell18