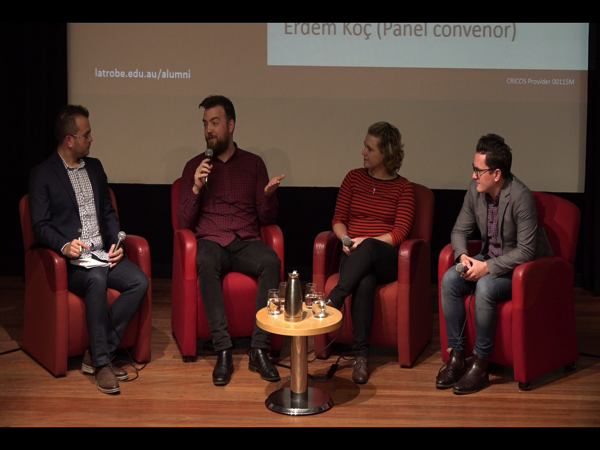 With a rising online presence, politicians are now using social media as a means to push their message.

La Trobe University’s Alumni Series Event on Wednesday convened to discuss the role social media played in this year’s federal election, the consumption of news in contemporary society and examining the practices and systems for journalists to succeed.

Speaking on the recent national election Di Stefano said he thought it was going to be the live-streaming election.

“Facebook live had just launched … I thought to myself, everyone’s gonna be Facebook live-ing … so I was a little bit dejected when I realised that actually this was not the [case],” he said.

“Social media didn’t actually have much big of an impact on the election. Not as big as past elections.

“[Liberal and Labor are] starting to realise there’s a limitation to social media.”

“Malcolm Turnbull checks his Twitter all day, but he doesn’t Tweet for himself anymore which is really devastating because he was so good and now he’s so bad,” he said.

“Malcolm Turnbull was genuinly told when he came in as prime minister – no tweeting.

“Bizarrely he hasn’t reached out to Mike Baird‘s … or Daniel Andrews’ social media manager and just poached them.

“I find it baffling that they just haven’t done that. The people that are working on it now, on his social media accounts, they don’t like social media. And if you don’t like it and you do it everyday it comes through.”

Di Stefano referenced Jeremy Corbyn and Barack Obama as examples of politicians who know how to run the 24-hour cycle.

“Good politicians just know how to work the social media cycle and the media cycle at the same time,” he said.

The panel discussed the balancing act of writing stories that they think are important and also catering to what an audience wants.

“There’s definitely a conflict going on with the media and why places like Buzzfeed have kind of come along and said ‘we want to give the audience what they want’,” Tom Cowie, crime reporter at The Age, said.

“We at The Age I think are still trying to grapple with that legacy issue of telling the audience you should care about this.

“You want to write stories that people will read, but you also want to try to cross that breach between [an] important story that people really care about. That’s kind of like the golden moment, if you can find that sweet spot.”

Gregory said the challenge for Domestic Violence Australia is to keep the issue relevant.

“My boss Fiona McCormack, she’s now pretty synonymous with the issue of domestic violence,” she said.

“Five or six years ago she would’ve got a phone call, a couple of times a year about a domestic violence story. She now gets asked to write opinion pieces so she has more of an opportunity, and we as an organisation can talk about violence against women in a public sense more often.

“The more you can do that it’s a self perpetuating thing.”

Di Stefano talked about how competitive the journalism industry is.

“[There] is probably about 20 to 30 new journalism jobs in Australia every year,” Di Stefano said.

“[In] a situation where there is a shrinking pool of vacancies, what you need to do as journalists, is to find a way to make yourself stand out and be different in a sea of mediocrity.”

“Think about the streams of communities that are out there that are crying out for some journalism and their stories to be told.”