Ladder have been central to the Pin Campaign this Finals Series. 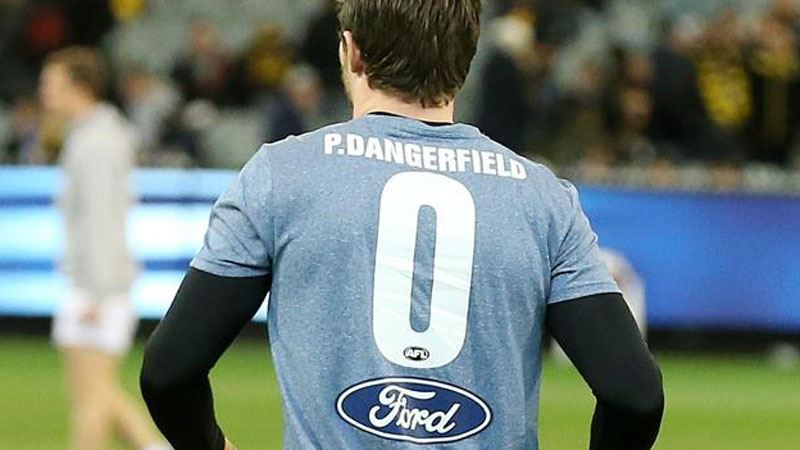 AFL-supported organisation Ladder will be looking to sell as many pins as possible at this year’s AFL Grand Final, in a bid to raise funds to help tackle youth homelessness.

Sending a strong message of support, Geelong’s Patrick Dangerfield wore the number ‘0’ on the back of his warm up jumper prior to the qualifying final against Richmond. That’s his way of saying zero is the only acceptable number of young homeless people in Australia, a concept that Ladder fully endorses.

His initiative came as a direct result of the Pin Campaign running throughout the Finals Series. The campaign is a player-led initiative to spur all footy fans to purchase the AFL Premiership Cup Charity pin. All proceeds and profits go directly to Ladder to support their work with homeless youth.

Ladder, a non-for-profit organization, work tirelessly to end the cycle of homelessness among young people, striving to help them achieve a better life and access opportunities that will make a difference to their future.

Ladder was founded in 2007 by AFL players who wanted to change the current state of youth homelessness, including former Essendon player Mark Bolton, CEO to 2015.

Current CEO, Elisabeth Tuckey, is pleased with the level of awareness that the campaign has generated, but was adamant that pins must be purchased in order to help the cause.

“In terms of awareness, it’s been great,” Tuckey tells upstart.

“The big week for us is coming up now with the pin selling. It’s always traditionally slower in those first two weeks of finals as well.

“So now this week there’s a whole range of activities that we’re doing in terms of pin selling, that’s the really crucial part for us. We need to really be converting that awareness piece into purchasing,” she says.

Ladder is partners with the AFL and the AFL players association (AFLPA), as well as being the official charity of the AFL Players. The players have had an integral role in the sustained growth and success of Ladder. Since 2008, more than $1.4 million has been donated to Ladder by players, with all players contributing $25 of their senior match payments per game towards the organisation.

Tuckey is under no illusions as to how significant the AFL industry has been in helping Ladder achieve its objectives.

“It’s crucial. We wouldn’t exist without it because it actually was an idea that came from three players who were working out at the food vans at Victoria markets and decided they wanted to do something about youth homelessness.

“At the heart of Ladder are the players, the Players Association itself, and the AFL and its clubs. So it’s absolutely crucial. It gives us a point of difference,” Tuckey says.

With the AFL and its players working so closely with Ladder on a number of past campaigns, the initiatives taking place this AFL Finals Series have been no exception.

While Tuckey concedes reaching zero homeless youth, as suggested by Dangerfield, may be an overwhelming prospect, she says it would be “irresponsible” to target any other number.

“I think there wouldn’t be one person that would disagree with zero being the only acceptable amount of young people when it comes to homelessness,” Tuckey says.

“So yes its ambitious, but I think to do anything else is irresponsible. To actually be acceptable of anything else other than zero, we are not doing our job properly,” Tuckey says.

She remains adamant that while it will be a big task, it is doable.

The AFL has good reason to be committed to the cause. Damning statistics over the last few years have shown a rapid rise in people experiencing homelessness in Melbourne, notably a 74% increase of homeless in the CBD within the last two years.

According to Homelessness Australia, there are currently around 23,000 people in Victoria who are experiencing homelessness, a whopping 20% increase since 2006.

Overall, there are currently 105,000 people in Australia who are homeless, with 15% of that crowd coming from the 19-24 age-category (15,325 people). The predominant reasons for people becoming homeless usually stem from relationship breakdowns, family violence and housing crisis.

Melanie Raymond, head of Youth Projects, believes that more needs to be done in order to help negate the severity of youth homelessness within Melbourne.

“Homelessness in all its forms, primary, secondary and tertiary, is rapidly on the rise. The rough sleeping in the CBD has risen every year for five years as a crisis in plain sight,” Raymond tells upstart.

“We do need to help fund those really making an impact to do the best they can and reap the rewards by having lower welfare and health costs, more tax payers and most importantly, safer, well communities,” she says.

Raymond believes that the Pin Campaign will generate high amounts of profit and interest, and that their partnership with the AFL will help them largely.

“The Ladder campaign will be very high profile and reach thousands of people, thereby causing people to give some thought to youth homelessness who may not otherwise think about the issue at all.

“The Ladder campaign should do more than get people talking, it will raise money for them. The AFL can and should use its profile and natural advantages to do good in the community,” Raymond says.

There is no denying that the AFL have used its profile to assist Ladder ever since its inception in 2007. Throughout the last decade, Ladder has made significant leaps and bounds, providing housing for many youths who have had the misfortune of experiencing homelessness at some stage in their lives.

“I think that the last few years have seen its most significant growth.

“We’ve moved into New South Wales. We’ve increased our presence across regional Victoria, we’ve increased our mentoring capacity. So there’s a bunch of things we’ve been able to do because of the level of awareness around Ladder,” Tuckey says.

While things may seem promising and impressive from that perspective, it also saddens Tuckey that the growth she has seen in the organisation has been required in the first place.

“I think it’s unfortunate that the growth is also linked to need.

“It’s great that Ladder gets to expand, but the other part is that it’s not great that we have to actually do that at the moment to meet the needs that’s actually out there,” Tuckey says.

Tuckey and Ladder will be hoping initiatives such as the Pin Campaign will lessen those needs, and that, come Saturday afternoon’s Grand Final, many generous fans will have donated to the cause and done their part in combating youth homelessness.

It will be the culmination of not just four weeks of hard work throughout the finals series, but of the daily commitments and goodwill that Ladder have worked so hard for.

“We’re really proud to say that all of the funds that are raised go directly into programs. Because of our relationship with the AFL, we’re able to direct that money straight into programs to help young people.