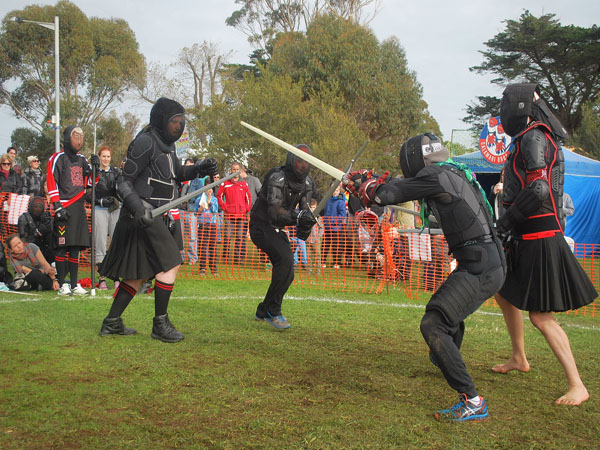 Combatants fighting in a tournament at the National Celtic Festival in Port Arlington, Victoria.

Rhonda Rousey move over, there’s a new kind of martial artist in town and she’s got a sword.

Martial arts enthusiasts all over the country are picking up swords, daggers, even bayonets and learning what’s known as Historical European Martial Arts (HEMA). HEMA schools are popping up all over the country, with six in Melbourne and at least twenty opening Australia wide in the last ten years.

Lessons are often based on the teachings of fencing masters through history, some even as far back as the fourteenth century. The schools seek to bring the lost art of armed European combat out of fantasy games, and back into real life.

Tournaments are held around the country, and some fighters even travel to Europe for international tournaments.

According to Don Zander, who trains at Fechtschule Victoria says, “It’s about reviving forgotten traditions.”

upstart spoke to students at one Melbourne school, Glen Lachlann College Estate of the Arms (GLECA) about the appeal of swords over more traditional forms of martial arts,

“When I pick up a sword I feel like I have the right to be where I am, and the more I train, the stronger the feeling gets.” Said Kate Jeffreys.

Another student, ex-AFL footballer Steve Roach said that, “skill, fitness, mental application and an element of risk all add to the recipe for quenching what has become an insatiable appetite for swords”.

Stuart McDonald, one of the founders of the school, told upstart what’s behind this new trend.