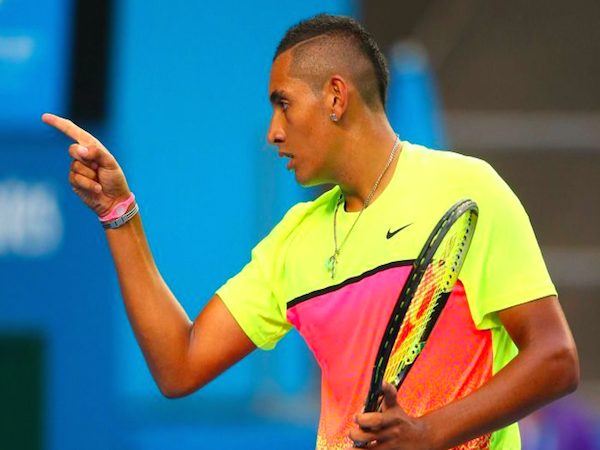 There is a lot of discussion about whether his conduct is acceptable.

Earlier this month, Kyrgios made comments about the girlfriend of Stan Wawrinka during a match at the Montreal Masters. The comments, which implicated Donna Vekic, were widely condemned and led to the 20-year-old receiving a $10,000 fine.

However, after the match, Kyrgios said his outburst was attributed to the pressure of the match.

“He was getting a bit lippy with me. Kind of in the heat of the moment, I don’t know. I just said it,” he said.

Roger Federer was one of many tennis greats to voice concern over Kyrgios’ actions.

“We all agree that he definitely crossed the line by a long shot,” Federer told the Cincinnati Enquirer.

The Association of Tennis Professionals (ATP), who issued Kyrgios’ fine, also agreed that his actions were uncalled for.

But could this sledge, or any other sledge in sport, have further legal implications?

Defamation lawyer, Jeremy Zimet, tells upstart that there are a number of factors to consider when determining if a sledge in sport could attract a lawsuit.

“What you’ll find in a lot of these kind of instances is a statement made by one sportsperson to the other really designed to put one player off his or her game,” he says.

“The statement won’t be considered much more than vulgar abuse or abuse that is non-specific and non-damaging to the reputation of a sportsperson.”

Zimet says that any potential legal action would depend on third party’s interpretation.

“If an ordinary, reasonable viewer considers Kyrgios’ statement to contain defamatory material regarding Donna Vecic, she may have a claim against Kyrgios,” he says.

“Similarly, if an ordinary, reasonable viewer formed the view that Kyrgios’ statement contained defamatory material of Wawrinka, then Wawrinka may have a claim against Kyrgios.”

There is no legal precedent for sledging within Australian professional sport. What happens on the field, in these cases, will most likely stay on the field.

Zimet says that this incident could also be considered defamatory under Australian law.

“The communication doesn’t necessarily need to be in the form of spoken words or text,” he says.

“It could be in the acting out of a certain physical act which in this case would be one player addressing to all others at the ground that, that particular set of players that he directed that act towards, had engaged in some kind of drug taking.”

This intersection between Australian sport and the law has recently been on public display.

Doping allegations and probes have become prevalent in the major Australian sporting codes. This has seen athletes, coaches and clubs become the subject of legal action.

“Sport has become more and more professional and it has become a huge business over the past few decades,” she says.

“It’s like any other business where if your business interests are threatened, you will take legal action or resort to other means to protect your interest.”

Susler says that sports’ governing bodies, such as the ATP and the AFL, now play a larger role in regulating their respective sports.

As society tends towards a more litigious approach, the benefits of sledging an opponent may one day be outweighed by the hip-pocket consequences.