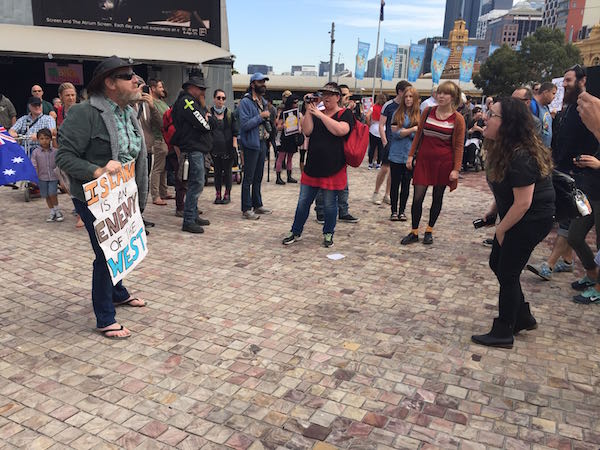 The congregation of protests that developed around the country yesterday, involving Reclaim Australia, anti-racism group No Room for Racism and an anti-Islamic movement, sure had a lot of shouting.

Statements such as these were chanted repeatedly by the estimated crowd of 3,000 at Federation Square in Melbourne. The shouting would generally last for a minute or so, and then die down. When someone provoked another with a verbal tirade, it would all start over again.

“ALWAYS WAS, ALWAYS WILL BE ABORIGINAL LAND!”

“WE WANT OUR COUNTRY BACK! NO HALAL FOOD!”

One man who was walking around the rallies started many verbal jousts with others. He was quite clear in his ambitions. The man, who identified himself as Mark to upstart, carried a placard stating “ISLAM IS AN ENEMY OF THE WEST” and didn’t hesitate before getting in the personal space of others to express his point of view.

When he approached me it was no different.

“It’s important that I’m here because Islam is an evil cult… there is no room in this country for those who follow the religion,” he says.

Mark was clear in his opinion that anyone who perpetrates violence should not be allowed in the country.

“We’ve got about 2 per cent of the population [who identify as] Muslim at the moment and they’re peaceful while they don’t have much power. But the political ideology that will come through once they get the numbers will be Sharia in our country. We have to nip it in the bud.”

Walking around the square and towards the Flinders Street amphitheatre, police looked steely-eyed and tried to quell any rowdiness before it started. For the time I was there, there was no aggressive action, only aggressive voices. Other reports have suggested violence did break out during the protests, however, which was condemned by Opposition Leader Bill Shorten.

Many who were part of the anti-racism rally formed a line at the bottom of the Flinders Street amphitheatre steps, confronting others who wore T-shirts of the Rise Up Australia Party. 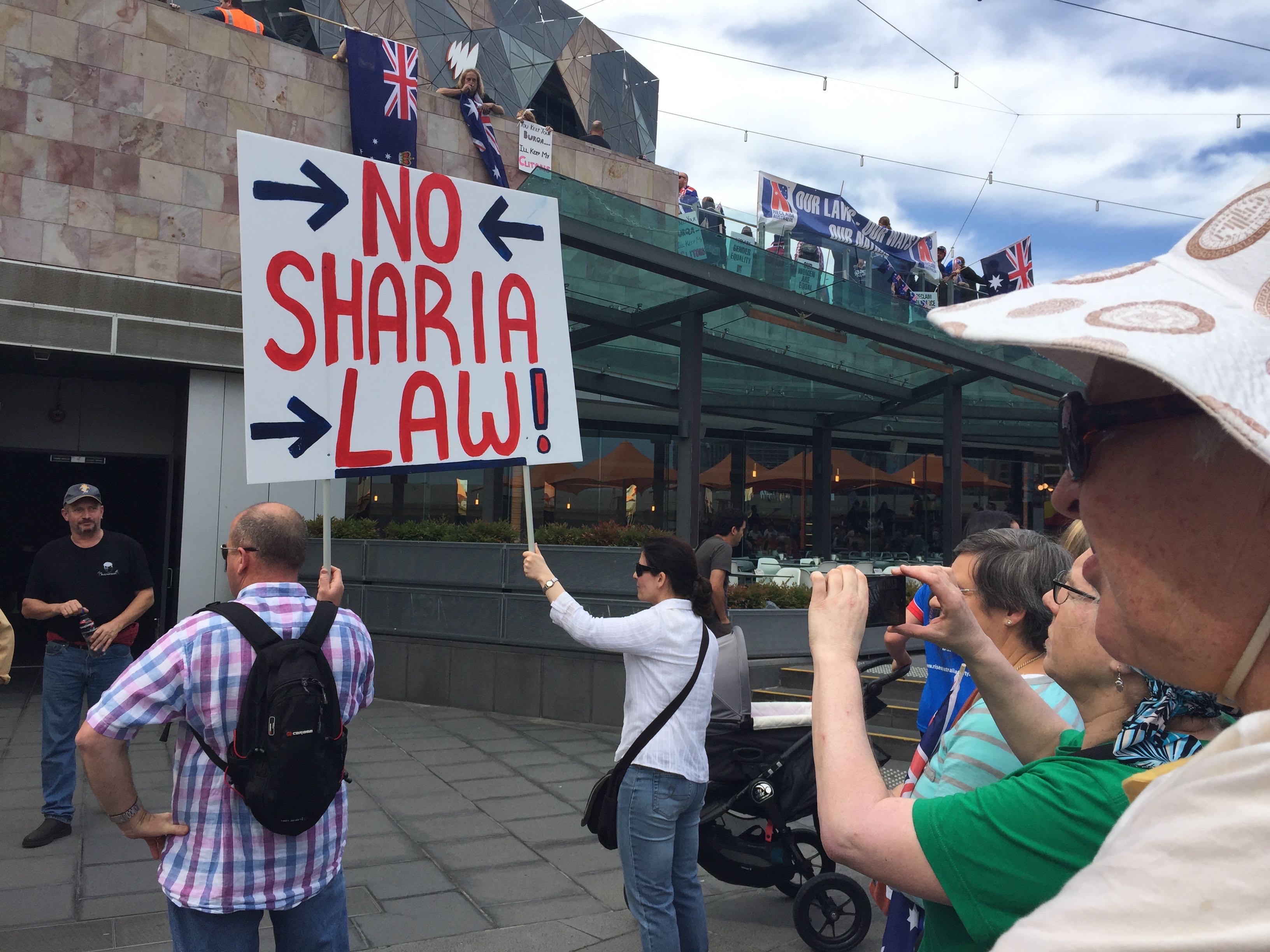 Someone walking around with the Socialist Alternative newspaper, Red Flag, urged passers-by to buy it and join the line that stood across from mounted police which separated the two largest groups of opposing sides.

A man who was within the line, locking arms to demonstrate unison with strangers beside him. He told upstart that Reclaim Australia is “a mask” and was “re-establishing grounds for an older racist Australian culture”.

“[Reclaim Australia] are worrying about nothing. It’s the same hysterical nonsense about the Chinese in the 1960s or Irish people in the 1850s coloured with more nonsense about terrorism,” he says.

The continuous chants were yelled loudly by one group to another, seemingly without much thought. Close by, people took the Australian flag from the back of a Reclaim Australia protestor and burnt it to the ground.

The focus seemed to turn to bravado, with protestors shouting increasingly at their opposition and carrying out clichéd actions of tokenism. The majority of the rallies revealed more about political fringes who seem to think provocation is an effective tool, when, in reality, it often leads to more misunderstanding amongst people.

I did, however, witness a positive interaction amongst all the shouting as I headed towards the junction of Flinders and Swanston Streets.

Just to the side of what is known as The Shard in Federation Square, there was a caucasian man in a leather jacket and an Indian Islamic man in a “Say No To Islamophobia” shirt, participating in a deep discussion.

The man in the jacket was part of Reclaim Australia. He was asking questions about Sharia Law and what it means, and the other man was explaining concepts of the law. Fellow protestors and people walking by created a circle around the two men, listening intently as they explained their points of view without much interjection.

This interaction was a perfect demonstration of effectively engaging with the opposition, while everyone else was shouting from afar. It shows that we can try and understand each other using words, rather than shouting slogans or resorting to aggression.

Philippe Perez is a third-year journalism student at La Trobe University and Media editor for upstart. He would rather not lose his voice, so he shouts many things over on his Twitter instead.