Living on her own, 80-yr-old Marie-Thérèse Faure has been trying to adapt to her new isolated life. 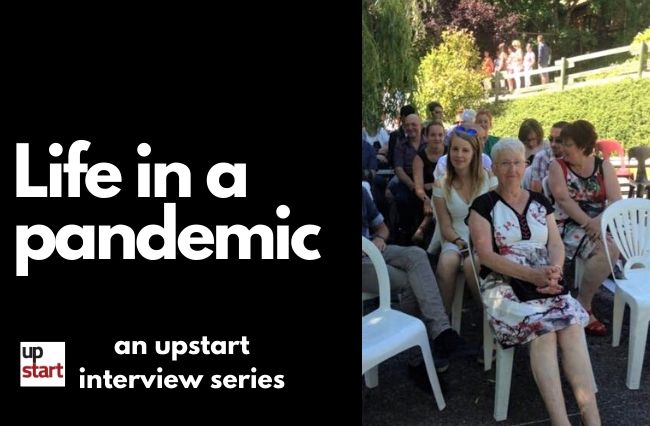 Along with other European countries like Italy and Spain, France has been greatly impacted by COVID-19. With over 100,000 confirmed cases and 17,000 deaths in a month, the French government has had to take radical measures to ensure the safety of its citizens.

Since 17 March, the country has been in complete lockdown. Most businesses have had to shut their doors, and people have been confined into their houses until at least mid-May. They are not permitted to step outside without completing a form justifying their reason for doing so.

Marie-Thérèse Faure, a retired octogenarian from a town of the Auvergne region, told upstart about the struggles of her daily quarantined life.

Could you describe what it is like for you now in France?

Life in France at the moment is very difficult. We can’t leave our houses, we have to respect the isolation rules. So we are only allowed to go outside for a total of an hour per day, to exercise within a kilometre range of our habitation, to go grocery shopping or to buy bread. And we must have our permit with us. We have to be very careful. I really only leave home to buy the newspaper and fresh bread. It’s very hard, living like that. I feel lonely and abandoned, because I can’t really talk to anyone in person, even to my children.

It is not a very reassuring situation. Especially me, at my age, it is scary. I feel like, as an 80-year-old, if I were to catch it, I’m not sure I would survive it. I mean, I am healthy and all, but they prioritise young people at the hospital. But, you know, I try not to think about it too much because that’s the only thing I’d be thinking about otherwise.

When addressing the nation, Emmanuel Macron compared this pandemic to war, a war against a virus but a war nonetheless. You lived through World War II, what do you make of that? Is it an accurate comparison according to you?

I was born in 1940, so I was still very young when the war ended five years later. I have a few memories, but mostly from what my family told me about it later on. Like now, we couldn’t go to church or leave the house much, so my parents were unable to baptise me and ended up choosing my older brother as my godfather. We couldn’t go to the shops either, but fortunately my parents were farmers so we never really lacked food. They would exchange some veggies against clothes to our neighbours. We tried to stay inside as much as possible, so yes, it’s true that this epidemic has some similarities with the war.

Well, I try to buy enough food and milk so that I limit my visits to the supermarket. My daughter does my grocery shopping sometimes and then leaves the bags in front of the building doors. It is weird, to see my daughter a few meters away, behind the glass doors, without being able to kiss her.

I’ve got a balcony so I spent most of the sunny days out there, looking at what’s going on in the street. Sometimes, my neighbour and I go walking around the block… we keep our safety distance, don’t worry. Well, she invited me to take the tea with her the other day, and she is so nice I couldn’t refuse. We know it’s not really allowed but we tried to be careful and sat on opposite ends of the table!

I watch TV a lot too. I don’t feel like doing anything lately anyway. They said [on the news] to keep busy and do activities like knitting, but I don’t have wool and have no way of getting it anyway. I don’t feel like doing anything because I can’t do what I usually enjoy doing. I’m always going on and about, seeing my friends and children, playing cards with my brothers … None of that is possible anymore.

How is it to be a grandma from afar?

It’s not easy. We call each other, we send virtual kisses. I’m not very good with their video calls, I can’t hear anything. Two of my great-grand-children had their birthday this month and we couldn’t celebrate it. I sent them cards but it’s not the same. I miss them very much.

Is there anything positive that happened that you would like to mention?

I’ve seen on TV that every night, in big cities like Lyon or Marseille, people clap to thank medical workers for everything that they are doing to save those suffering from the disease. It is a good thing I think.

Last week, churches across the whole country rang their bells at 7.30pm for the same reason, and they asked people to put candles outside their windows, as a symbolic prayer for all the hospital staff and COVID-19 patients. So I did that too.

It is nice to see people helping each other out too. Someone I know is making masks at home, so she dropped by and gave me two of them.
Before the virus, it was a bit like everyone for themselves, but the virus is not making any difference, we’re all equal in that way, everyone can get sick.

Article: Clodie Veyrac is a third-year Bachelor of Media and Communications (Journalism) student at La Trobe University. You can follow her on Twitter @clodie_v