With the Tokyo 2020 Olympic Games postponed, skateboarder Hayley Wilson talks about what it’s like preparing for the Games during lockdown. 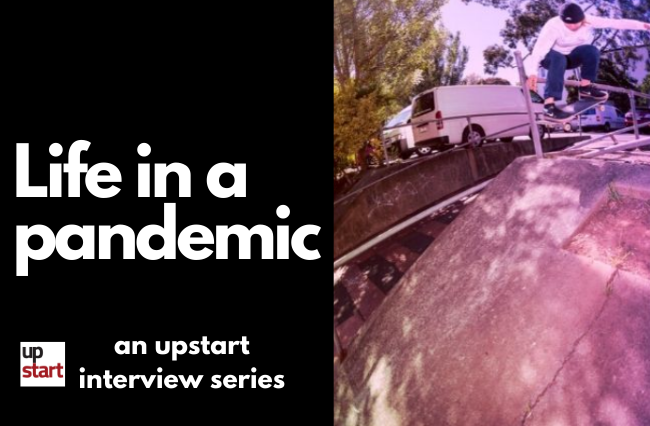 Hayley Wilson, 18, a professional skateboarder on her way to the Tokyo 2020 Olympics.

Hayley Wilson was preparing to represent Australia in street skateboarding at the 2020 Tokyo Olympics when they were postponed due to COVID-19.

The sport was due to make its debut at the 2020 Games and now Wilson will have to wait even longer to compete in the history-making event.

Street skateboarding involves the use of anything found on the street such as railings and stairs to perform the most difficult and complex tricks, and Wilson has been one of Australia’s most successful female competitors on the world stage. Since entering lockdown, Wilson has traded Tokyo for Mansfield, Victoria and the skatepark for her parents’ garage.

But she’s not letting the postponement bring her down. In fact, she’s grateful for the opportunity to sharpen her skills before the rescheduled Olympics in 2021.

In the early days of the pandemic, how did you think the Olympics would be affected?

When it started to get semi-bad and they started cancelling all the [other sporting] events. They cancelled the ones that were closest which was supposed to be March to early April.

As soon as they cancelled the other events, I was like, ‘there’s no way that this is going [ahead for] the Olympics’. So I just assumed that it would be either postponed or just cancelled all together.

How did it feel when you received the news that it wasn’t going ahead this year?

When you think of skating, you think of the outdoors. So how have the self-isolation measures changed the way you train?

The only thing that’s really changed is the location of where I skate, which is in now in the garage. But I used to do that between the age of seven to 14 so I’m not too bummed about it. It sucks because I love going to the skatepark and having that freedom, but we can’t do anything about this. It’s an uncontrollable situation.

Have you picked up any other hobbies during lockdown?

I’m using this time to rejuvenate my body and reflect on the last 12 to 18 months and see what I can do better for the next 12 months. So, I’ve been doing a lot of yoga and breathing exercises and stuff like that; a lot of things that I used to do, and I stopped because I didn’t have time.

One of the interesting things about skating is that it has a huge social culture. How are you keeping in touch with others in the skate community during isolation?

I facetime some of my skate friends and a lot of my friends who aren’t skaters. As long as you keep in touch via video call, it’s fine. Everyone’s in the same boat. I’m sure there’s a lot of people out there still trying to skate because some people don’t have the facilities or the opportunity like I do where I get to just skate in my garage with my flat bar.

What do you miss most about ‘before’?

The thing that I didn’t appreciate or wasn’t grateful enough for is seeing my friends every day. Before this was happening, you wouldn’t think about hanging out with your friends, you’d just do it.

Or just having the freedom to go to the skatepark where it’s not illegal. It’s crazy to think that if you’re hanging out with more than one other person it’s illegal.

Have you been tempted during this time to head down to the skatepark?

The day before they closed the skateparks, I did go down. But there’s no point risking it, as much as there’s not many cases [of the coronavirus] in Mansfield, we want to get this over and done with as quickly as possible.

Before, I would wake up, have breakfast, go to the gym and then go skating.

Now, I wake up and go for a walk, do yoga, breakfast, work out, skate and then probably work out again. I’ve started to work out twice a day because I’ve got nothing else to do!

Do you have any advice for any other young athletes who are also in isolation and feel like they might be going a bit stir crazy?

As much as I’m going crazy too, my advice is to try and get outdoors for at least half an hour a day.

We’re sitting inside a lot so if you’re not exercising for at least half an hour a day, my personal experience is that I get kind of sad and down because I’m not moving. I try and exercise as much as possible so that I’m not really thinking about isolation happening and being stuck inside.

So, staying active as much as possible is my advice.

Article: Madeline Donis is a second-year Media and Communications (Journalism) student at La Trobe University. You can follow her on Twitter @MadelineDonis1