How has life changed for La Trobe students since the beginning of the COVID-19 crisis? 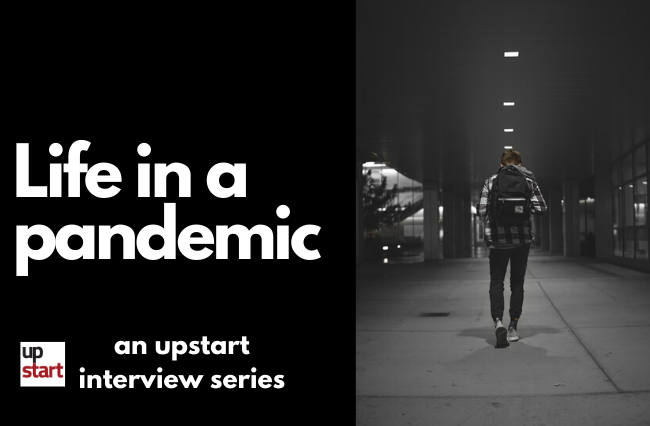 The upstart team, student journalists, working and studying from home

For the past few weeks, life as we know it has dramatically changed. Barely a few months after China warned of its existence, COVID-19 has spread all over the world, forcing governments to take drastic measures to flatten the curve of contamination. In Australia, countless institutions and public places have been forced to close their doors. Since Tuesday 31 March, non-essential gatherings are limited to two people in Victoria, when only a few weeks ago, 86,000 people attended a cricket match.

Many have been impacted by these changes. Upstart will be working on an ongoing interview series looking at the human stories behind the ongoing pandemic. We thought we’d start with our upstart team, who, like many journalists around the world, are trying to cover stories from a social distance.

We’ve all asked them the same question: how has life changed for you since the pandemic? And here are some of their answers.

My last shift at Melbourne airport was heartbreaking.

I walked in the morning to an empty terminal and saw airline staff standing on the floor by check-in counters, crying. There were no passengers around, people are not allowed to travel anymore.

The nationwide travel ban means only one thing for airport workers: unemployment.

The aviation industry is suffering the most during the COVID-19 pandemic, affecting the wellbeing of thousands of people who have lost their jobs overnight.

My partner and I were in that unlucky bunch.

We both work in aviation. With all the international and domestic flights being cancelled, there is no more work for us. We’ve been stood down indefinitely without pay.

I have just moved off living on campus to come home to my family. Although it might take some time to adjust to, it’s simply the right thing to do.

My parents were getting increasingly worried with every second that I stayed on college, but it’s good to see they’re all good now.

Studying from home will not be the easiest of things, with a questionable internet connection and sharing a house with a Year 12 student and a school principal means workspace will be at a premium.

And having no sport to play, to watch, to think about, to talk about has taken a lot of motivation out of me.

Sport has been most of my life. Coming from a tiny town, there isn’t much else to do so it’s taking some time to adjust, but it will be a good challenge for myself to find something new to do.

This month, I was supposed to begin rehearsals for a musical that I worked so hard to get into.

COVID-19 has meant I don’t have an income, I am doing uni online and I haven’t been able to go to all the events I had planned this year. But it’s not being able to rehearse my show that’s really got me down.

Practising for a show keeps my mind and body healthy. I get exercise from the choreography, a mind workout from singing and there’s the wellbeing aspect of being with the rest of the cast.

The cast is my family and not being allowed to see your family is tough.

Whilst I am thankful for my health and the health of those around me, I can’t help feeling a pang every time I remember I don’t have rehearsals anymore.

Moving back home to my farm in New South Wales was an easy decision. I had the choice to stay in Melbourne in a unit next to the highway with unlimited internet or to move back to the open spaces with family as company and internet that runs off a satellite dish.

I moved back for my sanity and for the comfort of being surrounded by family, but it’s made my adjustment to studying online much harder.

I was also stood down as a lifeguard now that gyms are closed, and my netball season is postponed, so there’s nothing holding me down to the city.

My parents were also incredibly stressed and were hoping for (persuading) my 29-year-old sister to come home – they were concerned for her Type 1 diabetes. My 27-year-old sister that’s a nurse also had to make it clear that she’s needed by other people right now; while my 23-year-old brother (who’s also a Type 1 diabetic) was talked into leaving Cairns before the borders closed. My Dad was also keen to have my Nana and her menagerie of guinea pigs come live with us indefinitely.

And that’s where I had to draw the line and explain that bringing a lot of at-risk people to the one household maybe wasn’t the best idea for our health or sanity.

I live with both my parents and my younger sister and we’ve been instructed to work from home during the pandemic.

In order to maintain productivity and ensure that we can have our meetings in peace, we have sectioned off areas of the house and allocated “offices” to each member of the family. This means that our house now functions as an office from 9am – 5pm, Monday to Friday.

It’s also the worst workplace I’ve ever been a part of.

First, there’s that weird dynamic of being birthed by your co-workers – it doesn’t matter how high you climb up the corporate ladder, you’ll still be getting their coffee.

Whoever enters the kitchen during the lunch hour, needs to make lunch for the whole office.

And my co-workers keep walking into my office in their pyjamas and flicking on the TV.

Photo: by Maxwell Nelson on Unsplash