With a baby on the way and a back injury that required surgery, Mohinudeen was admitted to The Alfred, just as an outbreak of COVID-19 emerged. 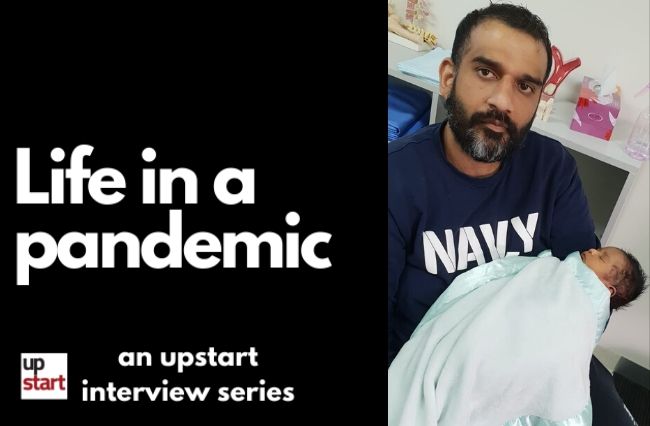 Soon-to-be father for the second time, Miqsan Mohinudeen, 35, was admitted to hospital during the peak of the pandemic for surgery.

Miqsan Mohinudeen is an average Aussie bloke who, like many, has faced some challenges during the pandemic. Two years ago he was diagnosed with the inherited condition haemophilia. After injuring his back playing indoor cricket last December, Mohinudeen had to undergo surgery in April this year at The Alfred, the only hospital that treats haemophilia patients.

A few days after he was admitted, an outbreak of COVID-19 developed in the haematology and oncology wards, where 12 people tested positive for the virus. Mohinudeen told upstart about his unlucky experience, his decision to go ahead with the surgery, and how he had to self-isolate from his family.

What was the urgency to have the surgery right away, particularly in the midst of the pandemic and with a newborn on its way?
One of the most urgent parts was the fact that there was a newborn on its way, and I was actually not able to walk pain-free. So, the back issue turned into a nerve issue running down my leg, and I was on a whole heap of medication. So, as a result, surgery was the best option to get back on my feet as soon as possible. If I didn’t have surgery then, there’s every chance now that I would be dependent on pain medication.

What went through your mind when you first heard about the outbreak of the coronavirus which emerged from your ward?
The ward that I was in was the neurosurgery ward. There was an outbreak of COVID-19 in the haemophilia ward, which was also treating me, but I was a bit separate to that area. Obviously, the concerns were there that there was some reported outbreaks with patients having contact with the virus. So, I think, I just had to weigh up the two, knowing that there was a risk. I guess, it was also the concern of leaving the hospital and taking the virus back home as well, which could have affected my daughter as well as my pregnant wife.
I felt that regardless of what was happening, surgery still had to go through. There was also talk by the government to stop non-urgent surgeries, so I kind of figured that I had to get it done now or I could be just waiting.

What measures did you take to ensure yours and your family’s safety from the virus post-surgery?
I asked the staff based on the outbreak in their department as to how risky it would be for me to return home. They felt relatively comfortable for me to go home. But I think I still felt like just keeping myself isolated from my family. I just felt like, isolating for at least a week would’ve probably been a safer option, and that’s what I ended up doing.

So you self-isolated post-surgery. How did you do that?
I went into an apartment based on my medical condition. Whilst I left the hospital, I wasn’t actually discharged so I was still treated as an in-patient in the hospital but externally. So they had to send a nurse from the hospital twice a day for seven days.

Did you have concerns about the person coming and treating you?
I was fairly comfortable with it, as in, every time they came, morning and evening for seven days, they called me before they left and they asked me a whole series of questions regarding the COVID screening. Whilst they were protecting themselves by asking me those questions, I’m pretty sure that they wouldn’t have been putting me at risk as well.

How has your family coped while you were away?
For the time that I was away, I think all up, it was roughly two weeks with the time in hospital as well as the time in the apartment, so my wife relied on [her] parents to be there and support her. I feel like this was the better option, [me] being after back surgery and [my wife] being at the latter stages of her pregnancy, I wouldn’t have been able to provide any support anyway.