Karina Quigley shares what it was like getting married online during a pandemic. 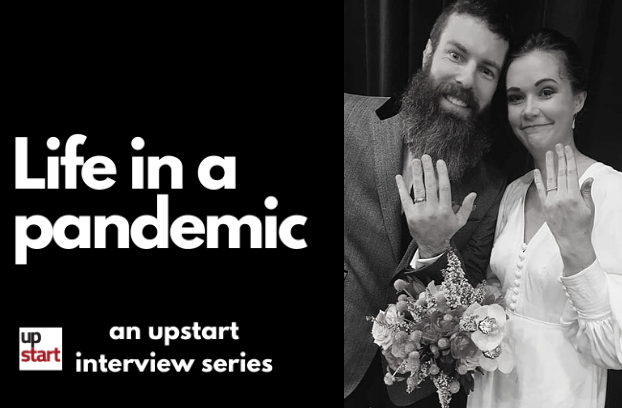 When social distancing restrictions came into place, Karina Quigley was meant to be celebrating her hen’s night at a concert with her friends, with her wedding around the corner. However, in the weeks that followed, it became increasingly clear that the wedding that she had planned wouldn’t be able to take place. What was meant to be a reception ceremony for 100 guests, turned into an intimate online wedding for close family and friends.

Karina shared with upstart what it was like dealing with the challenges of planning an online wedding during a global pandemic and the benefits of having a technologically savvy pastor.

Did you have most of your wedding planned before the lockdown came into full force?

I’m not a great planner. [Our parents] were a bit more on board, particularly my mother-in-law. She was very good at being organised, but we kind of scraped through at the end there. We were almost sorted and then we kind of had to think about [whether] the rules were going to come in stronger around three months ago, maybe, and even then, it wasn’t clear. Then, we just sort of said ‘can it’, we’ll do the best that we can and then we kind of got the ceremony idea later.

Did you consider waiting and postponing your ceremony to after the pandemic was over?

Yeah, that was really tough for us actually, because of living arrangements and everything, we were kind of settled and we were going to live together, and we rented a place. All sorts of complicated personal stuff that was just really messy to try and organise.  That’s when I found it really hard. It was mostly difficult because of the extra little layers that we hadn’t thought of, and whether to postpone everything or to have our wedding in a kind of weird way, rather than later.

Where did you get the idea to have your wedding on Zoom?

Just through the sadness of not being able to share it with people. Our parents were really wanting to be there and really wanted to voice that they would be upset if they couldn’t be, and that kind of hit me hard. Then [we discovered] our pastor was very technologically savvy, because he’d been doing sermons online, and, yeah, [I] think, it was a combination of us wanting to help our parents out and also wanting to utilise what we had as a resource.

How many people did you end up inviting?

I invited over 100, there were more guests than there would have been [at the reception]. Maybe closer to 200, we had 70 that clicked in at the time. So, 70-something people watched it at the time and we’re setting up a recording for a couple of people that couldn’t be there.

How many people did you have in the room with you on the day?

It was five, so it was the celebrant, our two witnesses, so my sister and Nathan’s best mate, and someone happened to put up a whole bunch of photos of the family around us, so, that we felt like we were looking out to people.

Are you planning on having another ceremony when the pandemic is over?

We hope for an anniversary bash, so, it will be a reception. We might do like a salute to the vows by doing a proper sort of redoing of the vows, but, basically, we want to have, I guess, you’d call it a second wedding.

Although we’re not sure when travelling will resume, have you guys thought about a honeymoon at all?

We’d love to go overseas. Nathan’s brother was actually going to get married in September of this year, in Ireland. So, we were hoping to visit him for his wedding and tag on a honeymoon there, but we’ll see, we’ll just wait it out. I saw this great meme today where it says, ‘can’t wait to walk down the aisle’ and it’s a picture of the seats and the rows of a jet.

What was it like for you living with your new husband in isolation?

I’m sure the honeymoon phase will end, but it’s been really lovely. I only have praise for it. It’s been really good, and because we both have a little bit of work and basically full autonomy, three days a week, we have things to do, and we enjoy all the challenges. There’s less stress in the household, obviously, because we don’t have to be ‘on’ all the time.

What advice would you give to other couples that may be in the same position that you were in or maybe even looking to move their own weddings online?

Be kind to yourself, in the sense that you and your partner are going to have some issues with the changes, and it can be really like upsetting. Be kind to one another, so, that you can work through something that’s ultimately a practical thing, but really actually an emotionally charged thing. It can be really hard, so, if you’re talking to other people give them some love, they’re lucky that they have a partner in their life, but it still can be tricky.

Article: Nadia Mahroof is a final-year Media and Communications student at La Trobe University, you can follow her on twitter @therealnadimah.