How a pair of doctors are coping with COVID-19 from the frontlines of two very different countries. 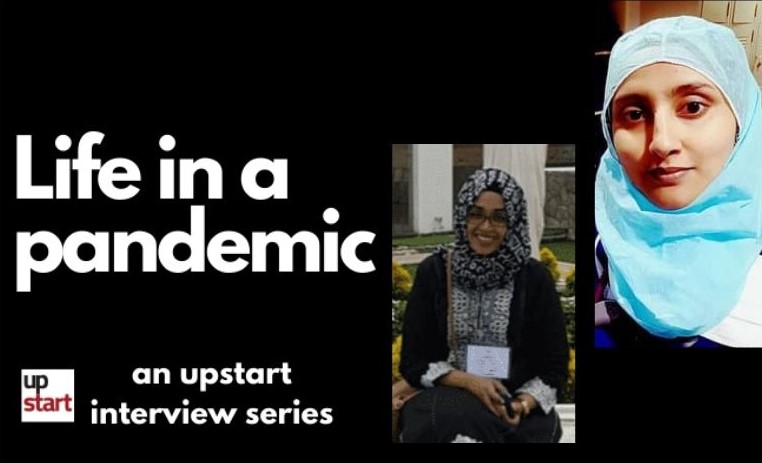 Shabeena Rasheed, 35, doctor in Perth, Australia and Rishdha Riza, 28, doctor in Colombo, Sri Lanka tell us about their experiences working in their hospital wards.

Dr Rasheed and Dr Riza have had their share of fear and anxiety from the frontline since the emergence of COVID-19. Every day they face the heightened risk of contracting the disease, and their worst fear is the likelihood of them spreading it to their loved ones at home.

They told upstart about what it’s like working in the healthcare industry and how their workload has reduced due to people avoiding hospitals. They both worry about their nations losing control of what they have achieved if people become relaxed.

And for religious reasons, Dr Riza struggles to accept the cremation protocols gazetted by the Sri Lankan government, despite the World Health Organisation permitting the burial of deceased bodies. As for Dr Rasheed, the most radical move Western Australia’s government has made is closing state borders.

How has COVID-19 affected you professionally?

Dr Rasheed: We were one of the only hospitals who accepted about 30 passengers off the [Artania] cruise ship. Once the patients arrived, there was initial anxiety because staff rotate around, patients go around scanning/imaging and they go across departments and come across to ours. There was a lot of intermingling, so we had to clamp down on a lot of things. There was certainly tension, pressure, lots of anxiety. But then it started to streamline off.

Our ED (emergency department) which would otherwise see about 80 patients an hour was down to 16 patients at a time. [There were] bed closures, a lot of the casual staff were lost. The impression is that the healthcare industry is not as affected but the flip side of it now is we’re almost plateauing off. That’s been causing a bit of anxiety. My own colleague had to take a mental health week off. It is very real and very tangible, the stress.

Dr Riza: In Sri Lanka, we have gone for an island-wide curfew and the country is in lockdown at the moment. No flights are coming in, no ports are open, nobody is basically entering the country. We have also taken measures to track down whoever visited the country. Their contact details are being traced and they are being tested and sent to quarantine centres and whoever becomes positive and symptomatic is being treated in a particular hospital. Island-wide we have designated a few hospitals [just for coronavirus patients].

I work in a tertiary care hospital. Patients coming in with respiratory symptoms, fevers, coughs or it could be the normal flu are sent to a particular ward called an isolation ward where they’re kept in separate cubicles and the doctor would attend to them. We test them for COVID and if they are positive, we transfer them to IDH (Infectious Diseases Hospital). We are basically just a transferring hospital; we don’t treat patients at the moment.

How has your workload changed compared to before the pandemic?

Dr Rasheed: Across the board, it probably echoes the same. We did expect that we would become the next Italy in the beginning. To be honest, that’s what the medical fraternity feared the most. But fortunately for us, that curve didn’t take off the way we thought it would. What I’m experiencing now is still the lull … because people are staying away from the hospital … The workload is less but there’s other pressures. There are concerns whether we would get redeployed into other areas as and when the need arises. We still don’t know what to expect going into winter and our flu season. We don’t know if everything is going to go pear-shaped from there on, hopefully not. We are sort of bolstering ourselves for that as well just in case.

Dr Riza: For me, the workload has reduced because we have a roster going on for this isolation ward that I mentioned earlier. All the doctors have been put into this roster, let’s say, once in two months. That is the situation at the moment. I work in a paediatric ward [when I’m not on that roster] … We have basically changed our work schedule so when I go to work it’s just me and one other doctor. The next day I don’t go to work. We have controlled it in a way that it’s just limited to clusters, so we don’t have community spread as of yet.

What do you think is the most challenging aspect of being a doctor right now?

Dr Rasheed: The responsibility, for sure … This is what we did all those years for, push comes to shove, we’ll be there. It really resonates and I think most of us in our working careers probably haven’t faced something of this measure so that’s the challenge and it’s going to be a new experience for us. Until we’re in the thick of it, we wouldn’t know how things would pan out.

You don’t think about it but day in and day out we are exposed to infections constantly, you know, your walking pneumonias and everything else. With this it’s just a different breed altogether because its rate of infection is so high.

Dr Riza:  Most of us live with our families. We have this fear of exposing our parents, grandparents because we all know that the virus is affecting mainly the adults and the elderly. We go to work, we expose ourselves, but the main fear is that we are exposing the other family members as well … I have friends and colleagues who have infants at home, that’s another worry that they have.

What are the risks you face in carrying out your duties as a doctor?

Dr Rasheed: To be honest, if you’re in a COVID clinic or in a COVID area directly involved, you’ve got all the PE (protective equipment) that you need. I think the basics are your surgical masks, and then you’ve got your eye protective wear and gown up and I think that’s good enough, for starters … I think I’d feel safe in that kind of environment versus just being on non-COVID wards or even in emergency and not having that PE, because you don’t know who comes through the doors. You don’t know if they’re positive or negative. That’s more of a risk than working in the frontline because you’re going to be properly geared up.

Dr Riza: At the moment we are equipped with protective equipment but there is actually one problem that people face, in the US as well, where they run out of that and healthcare workers are exposed to the patients without any of the masks or the goggles. At the moment we are okay because in Sri Lanka we haven’t gotten to that stage. All of these measures are to prevent it from going that far. The other problem we have is very limited ICU beds especially for a developing country. That is expected, I guess. If it exceeds our capacity, that is going to be a problem. So we have to control it at this stage.

Have you been put in a compromised position since the emergence of COVID-19? If so, how?

Dr Rasheed: I did have a bit of a scare because one of my colleagues got tested and I was in theatre with them. I remember coming home that night and saying to my husband, Sajid, if the test result did come positive, that means I would need to self-isolate. I’ll just probably tent up in the garage or something. What happens if I come home with the infection?

Initially it was intense, I was waking up at 2 or 3 in the morning, I was having frontal headaches for an entire week. It weaned off now as we’ve come to terms with it as a person, as a family, as a nation, so it’s become a new norm.

Dr Riza: One would be the disposal of the dead bodies. It’s a bit of a controversy at the moment. The WHO guidelines state that the bodies could be either cremated or buried and Sri Lanka is pretty adamant on the cremation. It’s just a guideline and everyone was sticking to it and now it’s been gazetted so it’s basically a rule.

I’m also a person of science so I tried looking for research and whatever article I could find to actually justify this. But [there’s] not a lot out there.