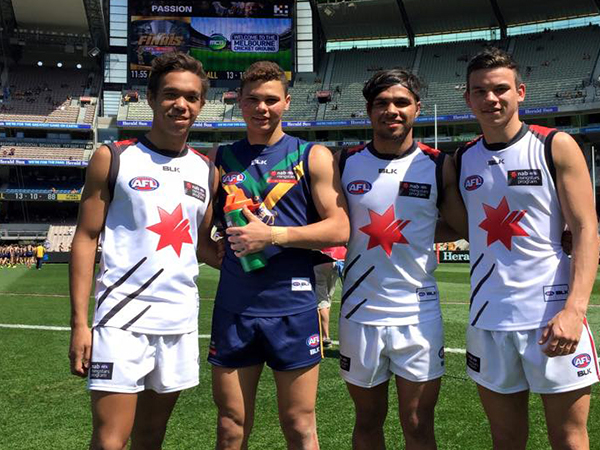 For every young AFL prospect, November 24 2015 is their date of destiny.

It’s national draft day, and for most hopefuls, the day will be life changing.

A small minority will experience the ecstasy that comes with being handed an AFL contract, while the vast majority of aspirants will miss out.

For those that do miss out, an important mental adjustment must be made, for life after football has already begun.

Northern Territory footballers, Daniel Rioli and Davin Ferreira, have made some major lifestyle changes in pursuit of an AFL career.

Both Rioli and Ferreira moved away from their homes in Darwin to attend schools in Victoria and South Australia respectively.

After a strong showing at the recent AFL Draft Combine, both have their eyes firmly set on an AFL contract.

“They both worked really hard in the lead up to the combine doing extra sessions, sometimes two a day.”

But Hodges says that despite their focus on football, both Rioli and Ferreira are well prepared for life outside the professional game.

“Both have given their career considerable thought, even to the point that if they are lucky enough to get drafted, they would still continue their ambitions to study in an effort to prepare for life after football,” Hodges says.

“Ferreira would like a career in community policing back in the Territory. He’s been talking about that for the last 12 months. His study at school has been aligning him towards that career path. Daniel’s pretty keen on working in public health.”

Rioli and Ferreira are both products of the Northern Territory State Academy.

For the first time this year, the academy is offering a dedicated welfare officer, appointed to assist players with various off-field matters.

The appointment comes after the AFL rolled out a national talent curriculum for all state academy footballers this year, which explores various aspects of mental health.

The inaugural Northern Territory State Academy Welfare Manager, Belinda Creer, tells upstart she has become another member of the already extensive support network within the academy.

“There’s no difference between them coming to see the physio for a physical ailment and coming to me about a mental or emotional issue,” Creer says.

“I don’t actually like football. I am only interested in how playing football affects the players. I wouldn’t know whether they play forward or back, I only know what they tell me about how the game affects them.”

As part of the new national talent curriculum, players are required to fill in an online wellness, training and nutrition diary.

Creer says that the system has allowed her to provide extensive support to players, particularly those who live in remote parts of the Northern Territory.

“If someone’s flagged with a mental or emotional issue and I think they require more specific attention, I can refer them on to a psychologist or psychiatrists or counsellor. The AFL have resourced referral groups in each area of the country,” she says.

Mental health in the AFL is still topical after Sydney player, Lance Franklin, pulled out of the finals series last month because of an “ongoing mental health condition”.

Creer says the players have embraced the program and now feel quite comfortable speaking to her about matters unrelated to football.

“You can see this relief come across their face when they realise that my only concern is their welfare. It’s that roundedness, that whole health approach that we push with them.”

With the national talent curriculum still in its infancy, Creer thinks this all encompassing approach could mean that young footballers will be eventually more prepared for life with or without football.

“If all the state academies buy in, we’re going to see a whole different type of footballer in five years time,” she says.