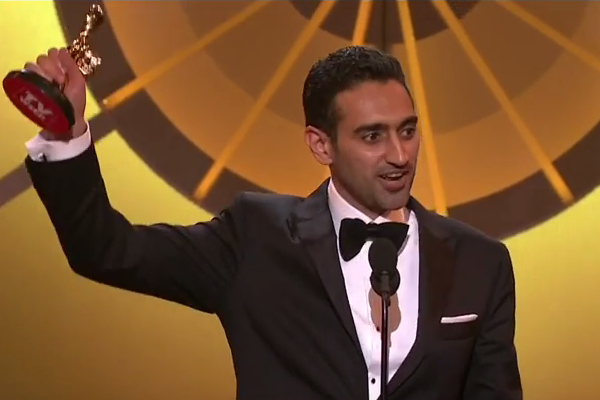 The biggest winner from last night’s Logies Awards was Waleed Aly, who took out the Gold Logie for best personality as well as the Silver Logie for Best Presenter.

He assured viewers that his nomination and success was completely normal, regardless of his background or skin colour.

“There’s nothing wrong with the picture. If you are in the room I’m sure there’s an Instagram filter to return things to normal,” Aly said in his acceptance speech.

“It will be fine. This is happening,” Aly said.

He went on to dedicate his Gold Logie to his wife and to all those with an “unpronounceable name”.

“It matters to them for a particular reason,” he said.

“Someone who is in this room, and I’m not going to use the name they use in the industry, came up to me, introduced themselves and said to me, ‘I really hope you win. My name is Mustafa. But I can’t use that name because I won’t get a job.’”

This year saw the first two ethnic nominees in the Gold Logie line-up ever, with Aly nominated alongside SBS presenter Lee Lin Chin.

While Chin may not have won the award, she took Waleed’s victory in stride… sort of.

Congratulations to Waleed, as a newsreader I respect the hell out of you. As a narcissist I will bathe in your blood.

Social media gags aside, Chin was genuine in her praise of Aly.

As much as I would have loved to won the Logie, I would have never been as articulate as him. Australian TV needs more of you.

It was also a big night for women at the Logies as Noni Hazlehurst became the second woman to be inducted into the Logies Hall of Fame, after veteran Ruth Cracknell in 2001.

Hazlehurst’s touched on this in her own acceptance speech.

“I fear that our hearts are growing cold,” she said.

“The fact that I’m only the second women to be given this honour is merely a reflection of the prevailing zeitgeist.”

Hazlehurst also recognised that things are changing in the television industry, albeit not quickly.

“Things are clearly changing, but they are changing glacially slowly,” she said.

“The great thing about glaciers is that if you aren’t on them you go under. I’ve been riding that glacier for 40 years and I’m staying on top of it.”

An evening of controversy

Controversy came from other avenues too, with Dave Hughes’ opening monologue raising some eyebrows with digs made at Channel Nine and the 60 Minutes Beirut incident.

“I’m a Celebrity … Get Me Out of Here! Did quite well, no doubt about it. Did so well, Channel Nine decided to do their own version with 60 Minutes in Beirut,” Hughes said.

Dave Hughes and Pete Helliar both hilarious on #TVWEEKLogies

Dave Hughes should be able to host the Logies as long as he wants. #Logies2016

You just knocked the #logies opening out of the park @DHughesy funny, sharp, but warm, respectful…made the night

The same couldn’t be said for Craig McLachlan, whose jokes about his age awkward banter with co-host Miranda Tapsell scratching their heads.

Craig McLachlan reminds me of the drunk guy in the suit that you run into at 9:30 on Friday night, completely off his face. #TVWEEKLogies

Well done to @missmirandatap for keeping her cool with an off-tap Craig McLachlan. #Logies

Shane Warne also created controversy after an altercation with Fairfax Media on the red carpet.

One award recipient in particular also left some viewers scratching their heads.

Up against the likes of television programmes ‘Who Do You Think You Are?’ and ‘The Australian Story’, ‘GoggleBox’ was named winner for ‘Best Factual Program’ for 2016.

Gogglebox won Best Factual Program?
Is that even a real category?

After this year’s controversy, what will next year’s Logies bring for television stars and fans?

Here’s a list of all of last nights winners.

The Most Outstanding Miniseries or Telemovie