Luca Luvera doesn’t let his prosthetic leg get in the way of doing what he loves. 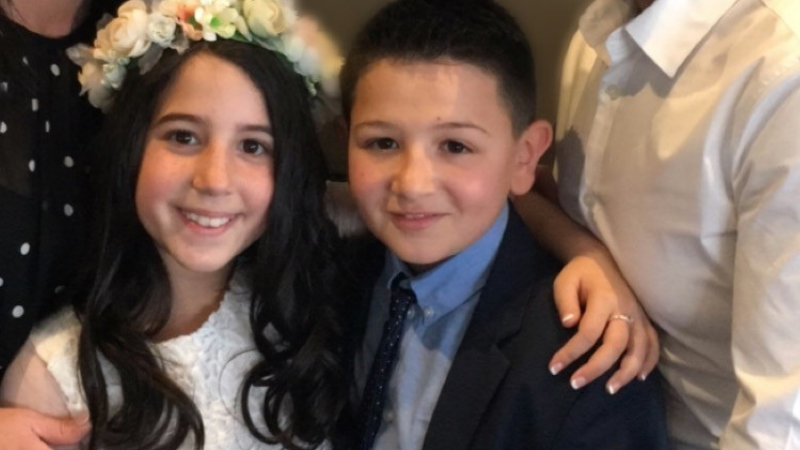 Luca Luvera and his sister

Luca Luvera was your typical sports-loving six-year-old boy, until a “slight limp” after a footy game turned into a deadly bout of bone cancer.

The crushing diagnosis came with a heartbreaking outcome, not only for Luvera, but his whole family.

In order to remove the cancer, he would need to have his leg amputated.

His Mum Anna Luvera was heartbroken when she received the news from the surgeon.

“Ultimately it was like a really big shock that he had to lose his leg,” she told upstart.

“We thought that was going to be the last avenue. I was in a bit of denial during the operation and actually saw that they did take half his leg. I think it was just because he was so blasé and so adaptive with what had happened made that really easy for us.”

Luca suddenly had to get used to life on one leg, but it didn’t hinder his love of sports.

He was keen to get straight back into playing football, but his parents were a bit hesitant about the contact in the sport and signed him up for baseball instead.

But Luca wasn’t getting the enjoyment that he got out of playing footy and asked to return to the game, which his mother Anna just couldn’t refuse.

With that, she put her worries aside and brought him to Avondale Heights football club, making sure her son was getting the most out of his new life.

“We had so much reservations just because he’s an amputee and he wouldn’t be able to keep up with his teammates and things like that, but so far, he’s really adapted so well,” she said.

“He’s got a prosthetic blade that he uses, so that gives you a little bit of speed. But what he doesn’t have in speed, he has in determination.”

Luca, who is now 11 years old, says playing footy gives him a sense of belonging..

“I like being part of a team and being able to play with my friends,” he told upstart.

Anna says the best thing about Luca playing at Avondale Heights has been how welcoming his teammates have been.

She is so grateful that they don’t treat him differently just because he plays football with a prosthetic leg.

“When he first started [playing], a lot of his teammates were school friends, so they were used to Luca,” she said.

Not only has Luca been able to play with his school friends, but he has also connected with new people through playing footy.

“It’s good to play with friends l had from school as well as make new friends who were on my team,” he said.

Unfortunately, sometimes players on the field aren’t so friendly.

Anna says Luca has “copped some backchat” on the football field from opposition teams, which she says is hard to watch.

“I just think he should be commended for giving it a go and giving it a try and not be teased and things like that on the football field,” she said.

“Sometimes he gets a bit put off, sometimes it really affects him. He sees people looking and staring but he just gets on with it and it doesn’t faze him after a while.”

After just one year of junior football, Luca won something that not many would, claiming an Under-10 premiership with Avondale Heights.

Anna says Luca’s determination got him to this point.

“We never said no to Luca,” she said.

“We always told him to give it a try, and I think that’s just his personality, he just tries everything. He knows what he can and can’t do.

“I did play him down a year last year just because I know, as it gets on, he might not be able to keep up with the older age group so I wanted to prolong his football just to make him play for as long as he can. But at this point in time, he thinks he’s going to be playing for a long time.”

In typical Luca fashion, he desperately wanted to kick a goal after making his return to footy.

He received the opportunity in 2017 and made no mistake, kicking it right through the middle from a set shot.

But Mum Anna wasn’t even watching, covering her eyes in fear as he began his run-up.

“I actually covered my eyes because I just didn’t want to see the final follow-through,” she said.

“Because he was a right-footer, he had to sort of learn to kick with his left foot and that was not easy. You could just hear everyone else celebrating the goal, it was just really surreal.”

After already winning a premiership and kicking his first goal, Luca continues to follow his dream at Avondale Heights.

As a die-hard Richmond supporter, he hopes he can go from having the eye of the tiger to being one.