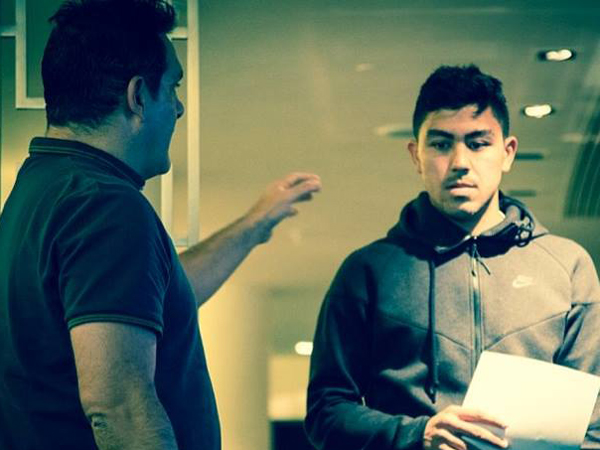 An unknown oddity within football circles, the 21-year-old midfielder is uncapped at senior international level and plays for Swindon Town in the third tier of English football.

Luongo beat experienced campaigners such as Mark Bresciano, Brett Holman and Alex Brosque for a place in Postecoglou’s 23-man squad to take on Ecuador.

“Mass has been excellent for the majority of the season and if a national manager really believes in picking players on form rather than on celebrity, he is a prime candidate,” says Sam Morshead, the chief sports writer at the Swindon Advertiser.

Luongo is one of four players set to make their debut in the green and gold in London – an unusually large number given the World Cup is just three months away.

And of the 23 men in the squad, Luongo is one of 14 with less than 10 international caps.

But following a rigorous scouting operation in which Postecoglou requested the names of every Australian playing professional football overseas, Luongo stood out following a series of consistent performances in League One.

The youngster has made 33 league appearances for Swindon this season, becoming a mainstay in the side and impressing Morshead who, in his role at the Swindon Advertiser, has had the opportunity many Australians haven’t over the last 18 months: watching Luongo play on a regular basis.

“He’s played all bar 194 minutes of the season and has been the major player,” Morshead says. “That’s an awful lot of responsibility to shoulder at his age but he has coped with it.

“Mass will surprise Aussie fans on Wednesday night – he’s playing below his level in League One. I would have him in my top 10 players in the English third tier.”

Luongo made a £400,000 move to Swindon in the summer of 2013 after progressing through the youth ranks at Tottenham. Since, he has excelled playing consistent senior football and has the full backing of the Australian coach.

“He is a highly-rated youngster,” Postecoglou said last week.

“I spoke to quite a number of people over there, including people at Tottenham like [manager] Tim Sherwood and they rated him very highly. He was a bit unlucky not to break through there.”

Standing at just 176cm, Luongo is no bullish central midfielder. Instead, he operates best just behind the striker where he is able to fully express the creative side of his game.

And so the 21-year-old has a battle on his hands to edge out experienced players, such as Tim Cahill, and up-and-coming prospects, like Tom Rogic, for a place in the starting lineup.

“He’s a central midfielder and an advanced one at that,” Morshead says. “He’s been used as a sitting midfielder, a bog standard centre mid and as a false No.9 in a 4-6-0 this season.

“Personally, I feel he is wasted as a sitting midfielder, therefore playing as a No.10 in a 4-2-3-1 would be the best way for Postecoglou to use him.

“When he’s been played deeper by Swindon he has been ineffectual. For six to eight weeks his best qualities were being stifled by being played too deep. Now he’s back to an advanced role and you can see the difference straight away.”

That difference is highlighted by Luongo’s six league goals so far this season.

Other potential debutants in Australia’s initial 23-man squad include Curtis Good, Ben Halloran and Chris Herd (who has since been withdrawn for personal reasons). However playing in League One, Luongo is the biggest dark horse to travel to Brazil for the World Cup in June.

After relocating to Europe in January 2011 at the tender age of just 18, Luongo has never played professional football in Australia. It’s a fact that only adds to the youngster’s sense of unknown ahead of this evening’s match against Ecuador.

“Mass has a remarkable ability, in League One at least, to carry the ball for long distances,” Morshead says.

“His close control is more akin to a tricky winger than a central midfielder but he’s got further strings to his bow. When on form he really makes a midfield tick and keeps play rattling along at a high tempo.

“A major flaw is his tackling game but he’s certainly working on that and he’s not one to shirk a challenge most of the time. He’s one of the most entertaining players I’ve had the pleasure of watching at Swindon Town.”

According to Morshead, the youngster has a big future on the international scene.

“I do think he has the potential to be an Aussie regular when he bounces up the leagues – with Swindon or elsewhere – and he could definitely cut it at Championship level today,” Morshead says.

“He’s nowhere near the finished article – I feel he has to work on the defensive side of his game – but that’s not to say that won’t come. He’s an entertainer in a position that isn’t always that prone to producing entertaining players. He’s a keeper for the Socceroos.”

Riley Beveridge is a third-year Bachelor of Sport Journalism student at La Trobe University and is the sports co-editor. You can follow him on Twitter: @RileyBev