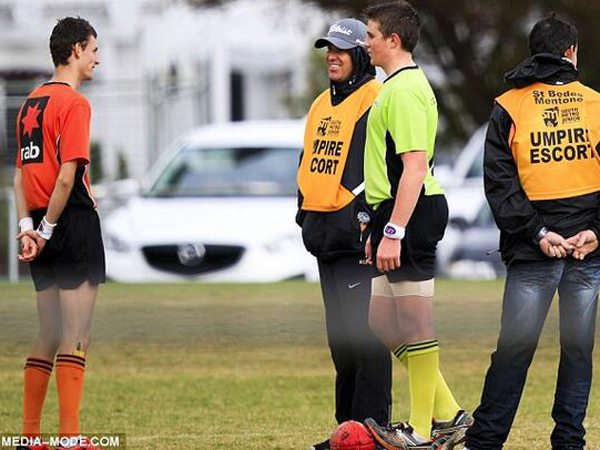 Umpires are not the stars of Australian Rules Football, but they are a fundamental part of it.

Just like coaches, staff and supporters, umpires are there to ensure that two teams can run out on the park each weekend, from the hollowed turf of the MCG to the nearby water-logged oval.

Players are celebrated for spectacular marks and amazing goals. Coaches are lauded for masterstroke decisions in the heat of battle.

But umpires are as much a cornerstone of the game as anyone.

It is crucial, then, that they are not taken for granted. Nor should they be victimised for slip-ups they make out on the ground.

Mistakes happen. The average clangers per game by AFL clubs this season is 46. Many of these blunders will be brushed aside by commentators and fans alike.

Perhaps the same, though, cannot be said for umpiring errors.

Best of luck to all umpires this weekend as we celebrate Community Umpiring Round. #umpires #importantpeople @VFLnews @aflvic @vflabc @AFL

Senior coach of the Ballarat Football Umpires Association, Simon Harrison, has been involved in umpiring for over 20 years, including several spent in the AFL’s NSW/ACT system.

“At AFL level, I don’t think it’s much different to cricket. Things are so scrutinised these days,” Harrison tells upstart.

“Everything is replayed ten times, everything is looked at and everybody has become a so-called ‘expert’.

“You need to remember that they only have a split-second to make that judgement call and, probably nine times out of 10, they get it right.”

But where the bigger problem lies, according to Harrison, is at the community level.

“Statistical data says that 70 per cent of first-year umpires will walk away from umpiring,” he says.

“One of the reasons, certainly at the community level, is abuse.

“There can be a challenge to retain umpires in general, not just young ones. People won’t like the abuse or the scrutiny at times and will walk away from it.”

This has not only affected umpire retention, but participation as well, which remains a significant hurdle for umpiring in community football.

According to Harrison, a statistic emerged recently that paints an unfortunate picture.

In Australia every week, approximately 20,000 umpires are needed to fill all appointments at the community level, but there are less than 12,000 umpires actually available.

Harrison claims that getting people involved is a struggle.

“I think sometimes umpiring is not seen as particularly attractive or glamorous and that is something else that continually needs to be worked on,” Harrison says.

“We’re really fortunate in Ballarat, in that our numbers are nothing short of terrific, but we are probably an exception to the rule at the moment.

“I know one competition that lost 110 umpires from last year.”

South metro Juniors must have a good budget for umpire escorts…http://t.co/OpatYUnT6n pic.twitter.com/LbDnJI1p1L

It’s not all doom and gloom, though.

Unsociable fan behaviour, both in the AFL and at the community level, has lessened over the years.

Indeed, Harrison claims that the current environment for umpires is much more welcoming than in the past.

“I think the behaviour (towards umpires) has improved significantly,” he says.

“I think there’s now a far greater respect for umpiring, because people maybe appreciate that it is a difficult job and it’s difficult to recruit people to do it.”

“From our group’s perspective, we’ve got to make sure that we have a group that people do want to be part of,” he says.

“It’s really important to have an environment that people want to be part of, so they feel supported and they feel included and they feel that they can ask difficult questions – or even what they think are silly questions.

“With education, recruitment strategies and processes and support networks in place, there is certainly significant work being done.”

People are the lifeblood of football, and without them, the siren would never be able to sound.

Whether it is the lady at the canteen, the secretary behind the desk, or those with whistles in their hands, football exists because of the foundations laid by countless men and women.

And with that thought in mind, it is clear that community football must embrace and encourage umpires of all ages.

Next time you are at a local game, remember why umpires are giving their time and effort to football.

Ranting and raving about an umpiring decision can only hurt the game you love.