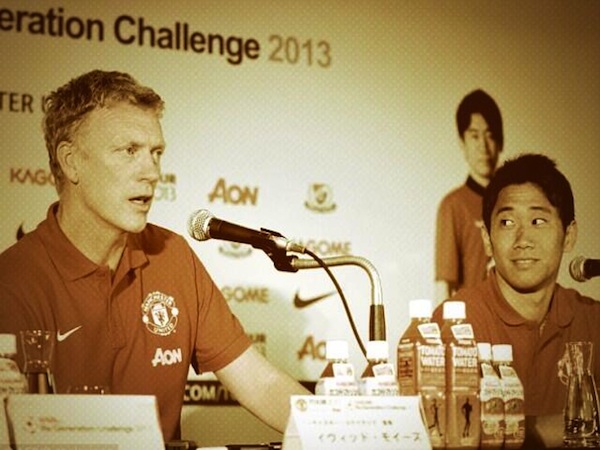 Any Manchester United fans who suggested David Moyes’s transition into the club would be a smooth process might just have deleted those posts off Facebook and Twitter this week.

The first month of the season has been rough for United, who’ve looked like a team burdened by a dramatic off-season which involved more than just replacing the greatest manager in Premier League history.

Once again, endless speculation over Wayne Rooney’s future dominated the headlines, a trend which is undoubtedly becoming too common for the team’s liking.

Likewise, the seemingly endless campaign to acquire Marouane Fellaini from Everton became far more stressful and expensive than necessary, due to indecision on United’s behalf.

The result of it all? United currently sit in eighth place on the Premier League ladder, already with two losses in five games to its name.

They’ve looked tired and reserved when taking the pitch to date – a fraction of the team which coasted along to their twentieth league title last year.

The 4-1 pumping at the hands of Manchester City on Monday exposed their biggest frailties so far in the new season – a clear lack of defensive cohesion, and more importantly, an inability to make inroads in the opposition’s final third.

Stringing together passes at the top of the City box all night, the Red Devils never quite seemed daring or creative enough to break down a strong defence established by Manuel Pellegrini’s men.

Michael Carrick and Fellaini seemed content to settle for the easy option across the pitch, a tactic City were happy to deal with all night. Meanwhile on the wing, Pablo Zabaleta consistently had the upper-hand over Ashley Young and his trickery.

While credit must obviously be paid to City’s defence, United have looked stuck for ideas all season, no matter who the opposition.

In fact, in their last four Premier League games they’ve failed to score a goal in open play, relying on penalties and some Wayne Rooney magic from a free kick to notch up a win against Crystal Palace.

Following Monday’s loss, Moyes admitted his squad “never really got to grips with their midfield players in the early part of the game. Because of that, they started to get domination.”

“We had to be stronger, but we weren’t.”

However, history indicates that only a fool would write United off this early in the season.

In fact, an encouraging 1-0 victory over Liverpool in the League Cup yesterday presented Moyes with some strong options to solve his offensive issues.

Nani was a constant threat on the wing, while Ryan Giggs brought over two decades of solid experience and creativity to the pitch.

The real solution may come through Shinji Kagawa, the 24-year-old Japanese international brought in from Borussia Dortmund last season.

United fans have long touted Kagawa as the solution to their midfield problems, a creative attacking-mid whose vision and technical ability can be the key to unlocking defences.

Yet once again Kagawa started poorly on the left wing, a decision made by both Moyes and Sir Alex Ferguson which has constantly drawn the ire of the Old Trafford faithful.

The positional choice even prompted Kagawa’s former coach, Jürgen Klopp, to criticise Ferguson for the strategy.

“Shinji Kagawa is one of the best players in the world and he now plays 20 minutes at Manchester United on the left wing!”

“My heart breaks. Really, I have tears in my eyes. Central midfield is Shinji’s best role. He’s an offensive midfielder with one of the best noses for goal I ever saw.”

Amongst the more physical players of the Barclays Premier League, Kagawa simply cannot cut it as a winger. He lacks both the speed and the strength to play out wide, and posed no threat to Kolo Toure while playing the role yesterday.

However, put him in his natural position in the middle, and it’s a whole different story.

After making the switch to central-midfielder, Kagawa looked like the creative threat United desperately required – providing quality one-twos and through balls which penetrated through the Liverpool defence.

Mid-way through the second half he showed a glimpse of his scintillating best, turning his man five yards out from the box before blasting a shot which narrowly deflected off the crossbar.

Shortly after, he was subbed off.

Unfortunately, it seems unlikely that Kagawa will receive any considerable amount of game time in the months ahead, particularly once Robin Van Persie returns to the pitch.

Carrick and Fellani seem to have secured their status as starters in the midfield, while the wing is obviously not an ideal option for him.

Still, it’d be wise of Moyes to opt for Kagawa over Fellani in times of trouble – he might just be the creative wildcard who can break down the Premier League’s toughest defences.