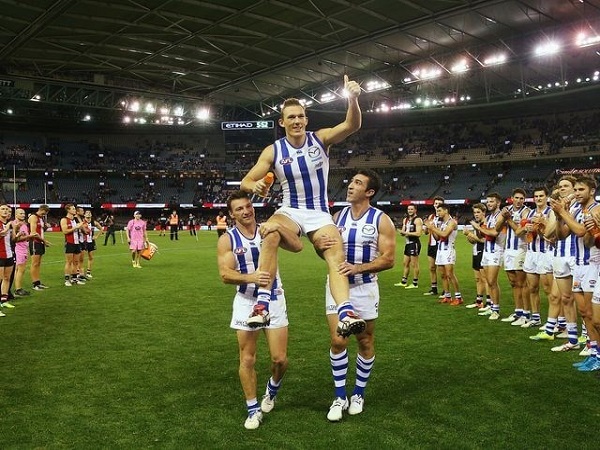 North Melbourne youngster Mason Wood created controversy in round 7 of the AFL season by closing out the match against St Kilda at Etihad Stadium by watching the shot clock count down.

With 22 seconds left on the game clock and only a solitary point separating the two teams, Wood was awarded a free kick inside his forward 50 after tackling Jack Newnes.

The North Melbourne runner came out to notify Wood of the situation, and he quickly figured out that standing still for his allotted 30 seconds would run the clock down risk-free.

It gave the Kangaroos a seven-point win en route to their seventh straight victory in Drew Petrie’s 300th game.

At the conclusion of the match, Wood explained his thought process and recalled how teammate Ben Brown executed a similar ploy against Fremantle in round four.

“I’m just playing within the rules and until they change the rules, players will keep doing it,” Wood said.

“The runner came out and told me there was only 20 seconds left in the match, so no matter how hard the Saints fans booed I was never going to let the footy go,” Wood said.

At St Kilda’s post-match press conference, coach Alan Richardson acknowledged Wood for displaying composure under pressure, but admitted that it was frustrating.

“I thought it was very well done, given that they’re the rules. If it had been one of our players I would’ve thought ‘gee, great composure young man’,” Richardson said.

“It was very frustrating though; it was the longest 30 seconds in the coach’s box I reckon I’ve ever had.

“It did seem [like] a very long time. We don’t get the benefit of being able to see that…or I couldn’t from where I was sitting…but I thought he played it really well.

When asked if it was a good look on the game Richardson replied.

“I’m not sure, but given the rules and the circumstances, I thought he did a really good job.”

North Melbourne coach Brad Scott praised Wood for the poise he showed and said that the club has set up scenarios at training over the pre-season for these particular moments within games.

“He just knew how long there was to go and the AFL put the shot clock up so he just did the maths and thought, ‘This game’s over,” Scott said.

The running down of the clock in a sporting game is not a new phenomenon. Teams plan for situational moments in games to gain an advantage and Wood executed perfectly.

The resultant controversy has has thrown up the question, should the shot clock be removed from the scoreboard?

The problem will inevitably remain as players are still made aware of the 30-second countdown by the umpire presiding over the shot at goal.

Running down the clock in other sports

The decision to run out the clock is not unprecedented in sport.

In basketball there is the 24 second shot clock and in the NFL the two-minute warning. At the conclusion of a basketball game, teams will retain possession, however, often players will be fouled in a bid to regain the ball.

In contrast, in the NFL, unless a penalty is given in the final two-minutes a player will kneel for the victory three times and run the clock out, if the defensive team has no timeouts remaining, which has been the norm for decades.

In the AFL, Joel Bowden against Essendon exploited rushing a behind from a kick-in, before the rule was changed to prevent time-wasting.

This was another example of a footballer thinking on his feet in a pressure situation.

Game awareness comes in many forms and this is one instance of a player executing his teams pre-planned play to perfection.