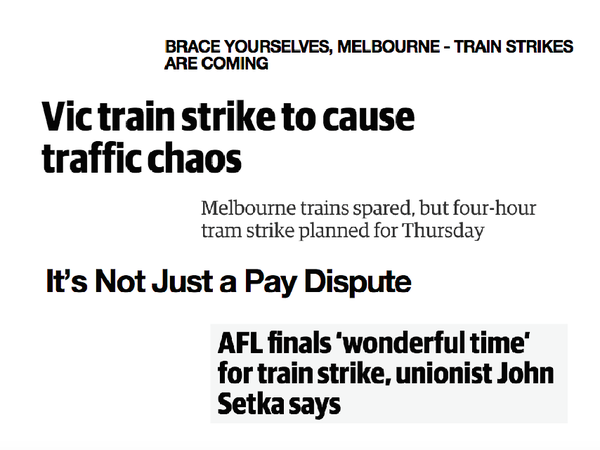 The RTBU’s fight to prevent changes to workers’ conditions, particularly rail workers, has been portrayed differently by various media organisations.

Some have portrayed RTBU more sympathetically than others.

upstart has taken this opportunity to demonstrate how different media outlets have presented both parties’ views.

Some of the Herald Sun’s articles have portrayed the RTBU’s protests as irrational and selfish.

“Today’s rail chaos is the result of a union refusal to give up ancient job conditions, including allowing train drivers to work just three hours but be paid for a full day,” one article began.

Despite not representing the RTBU, Setka’s calls to strike on Grand Final weekend will most likely position AFL supporters against the strikers.

MTMMemes has disputed many of the Herald Sun‘s claims, particularly those in regards to train drivers’ wages.

Other publications under the News Corp umbrella have taken similar anti-union stances.

In an editorial piece by Judith Sloan, published in The Australian, the strikers were described as “pampered workers”, undermining their reason to protest.

The Age has voiced similar opinions to the Herald Sun in a recent editorial piece.

They have condemned the choice to strike rather than the RTBU’s demands.

“Today’s train strike in our city, the first in almost 20 years, is an irresponsible error by the union concerned – the Rail, Tram and Bus Union,” the article stated.

“Complex enterprise agreements can take several months to form, and the process is not helped by one side going to the brink so prematurely.”

The Age has published several articles on the repercussions of the strike, claiming they will hurt the economy and that the changes to the system are necessary.

Fairfax has managed to provide a balanced coverage, allowing the oppositional voice to be heard, however, the piece itself is only 170 words.

Various online publications, including Junkee, Pedestrian and Guardian Australia, have provided their views on the issue.

The Guardian Australia published an AAP piece that focused on how the strike will affect commuters. The article states the strike is not about money but about workers’ conditions.

Pedestrian have taken a comedic approach to the situation.

“The news today that efforts to avoid industrial action being taken by Metro Trains staff has failed is certainly pretty grim,” the site said. By saying this, the publication is shifting the blame from the workers.

Junkee has taken a pro-union stance, by giving a Metro train driver a platform to explain why the strikes are necessary. By humanising the strikers in this way, it has made their cause more agreeable.

The strike has generated significant buzz on social media.

Reddit users have taken a particularly strong pro-worker stance. A Melbourne train driver, using the username topgreen, wrote a post detailing why the train operators are going on strike.

Support for the strikers can also be found on Facebook.

The page Metro Memes, and its associated blog MTMMemes, have been publishing articles that are in support of the strike and are heavily critical of Melbourne Metro and the strike’s media coverage. 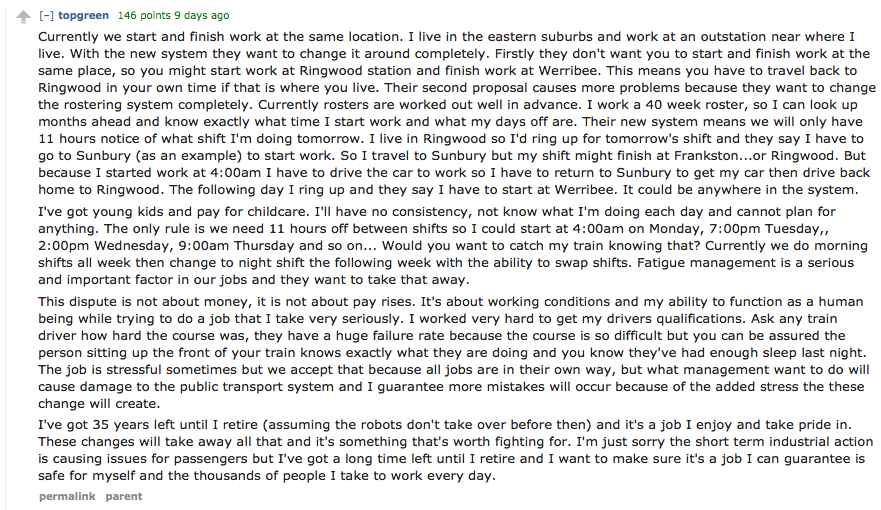 Major publications have failed to present the point of view of the workers who do not agree with Metro’s changes or the decision to strike.

The pro-worker rhetoric voiced through social media could reflect a disconnect between the larger media outlets and the wider community.

But it is difficult to make this assumption as only a small section of people are being represented by social media.

This article was updated at 9pm, Wednesday 9 September.