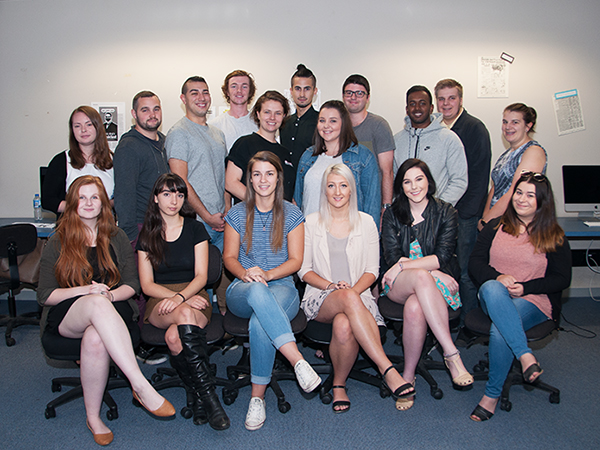 With the start of a new semester at La Trobe University, we have a new editorial team with new ideas and new stories. In a few weeks time we’ll start doing live webcasts from the studios here at La Trobe, and we’ll also be launching a new web site, giving upstart a much-needed makeover. But, without further ado, here’s the team that will lead us through this time of transition.

Rudi Edsall is a third year Bachelor of Journalism (Sport) student at La Trobe University and the editor of upstart this semester. His passions are sport – primarily cricket, Aussie Rules footy and soccer – politics and media. Rudi writes for Me? I Like Football and Bound For Glory News and can be heard on various podcasts and White Line Wireless during Australian cricket tours. You can expose yourself to weapons grade Rudi on his Twitter account @RudiEdsall.

Lauren Bordin is in her final semester of a Bachelor of Journalism (Sport) at La Trobe University. She recently completed an internship at the Melbourne Stars, spending the summer running around the MCG as one of the Big Bash team’s media and communications interns. Lauren takes a keen interest in cricket, netball and football at all levels, ranging from the AFL to suburban leagues. After university she would like to enter the field of broadcast journalism, hopefully with the opportunity of working abroad. You can follow her on twitter: @laurenbordin.

Ben Cuzzupe is a final year Arts student at La Trobe University. He is currently an Overnight Editor for Eurosport’s International/UK sites, while also contributing to Guardian Australia and Triple M’s The Greenfield Post. Ben previously worked for Perform Group’s Sporting News Australia and has also been published in Vice, The New Daily, Outside 90 and Tone Deaf. You can follow his advocacy of nautical flares at major sporting events on Twitter: @BenCuzzupe.

Rachael Roberts is currently in her third year of a Bachelor of Journalism degree at La Trobe University. She defected from Monash after her first year to move to La Trobe and follow her dream of becoming an editor of Rabelais Student Media, an ambition realised in 2015. Passionate about journalism, she hopes to one day work as a reporter in any medium that will take her. In her spare time she likes to see live music, read Penguin Classics and binge watch every television series ever created, as a result she spends most of her life sitting down. You can follow her on twitter at: @1RachaelRoberts .

Sally O’Brien is a third year Bachelor of Arts student studying journalism and history at La Trobe University and the Culture & Lifestyle Editor of upstart this semester. After a frantic and fun-filled year as the editor and graphic designer of Rabelais magazine, Sally is eager to continue producing content to stick on the fridge and show proudly to her pet rabbit. Her interests include art, literature, exploring Melbourne and wasting far too much time on the internet. You can follow her distrust of escalators and other musings on Twitter: @SallyOBrien42.

Matthew Elmas  is currently undertaking his final semester of Politics, Philosophy and Economics (majoring in journalism) at La Trobe University. Matthew is passionate about the application of pluralism in the political arena and spends a good deal of his spare time reading and engaging with his peers. He’s excited about the constantly changing media landscape and aspires to make a lasting contribution to the world of political journalism. Matthew is also currently the local news editor for The Northsider, a local newspaper based in Melbourne’s north, and has previously written about the fast-paced world of e-sports for joinDOTA.

Claire Varley is a third year journalism student at La Trobe University. After a busy 2015 working as a web TV host and boundary commentator for the Essendon District Football League, she is excited to take on her role as the multimedia editor for upstart in 2016. In her spare time, the accomplished pianist enjoys music in all its forms, especially if live and in a mosh, literature, trawling Reddit, and watching copious amounts of Netflix. She also writes a blog, clairehvarley.com, about everything from music to makeup, to commentary on social issues. As if that wasn’t enough, you can follow her attempts to be witty in 140 characters or less on Twitter: @ClaireVarley_. She did not however, write novel The Bit in Between, or The Hunger Games, but hopes to one day write a book as good as, if not better, than both.

Deniz Uzgun is a third-year Bachelor of Arts student (completing a double major in journalism and politics) at La Trobe University. His academic interests predominantly lie in history, politics and world cultures. As a self-proclaimed athlete, Deniz jokingly reckons he is capable of playing any sport to the highest level. Hoping to shed light on important societal issues through his writing, he shares an ambition of one day working abroad as a foreign correspondent. He has work experience at SBS Radio and is the founder of a global affairs blog titled The Carrier Pigeon. You can follow Deniz’s journey via his Twitter page at @uzgundeniz.

Connor O’Leary is currently completing the final year of his Bachelor of Journalism (Sport) degree at La Trobe University. A native of the Diamond Valley in north-eastern Melbourne, his interests heavily revolve around sport – particularly Aussie Rules football and cricket. Connor has spent time working as a match reporter for the Northern Football League and although unsure of which direction he wants his career to go, he would like to be involved in sport. Away from university, Connor enjoys spending time with his mates and losing his money punting on the Moonee Valley races. You can follow him on Twitter: @connoroleary_

Caitlyn Leggett is in her final semester of a Bachelor of Journalism at La Trobe University. She was inspired to study journalism after writing a monthly youth page for her small town newspaper; the Mansfield Courier whilst still attending high school. She then continued general reporting for the paper during her gap year before traveling around Europe. In 2014, she completed a semester abroad in the USA at The College of New Jersey where she also continued her travels. She enjoys writing about almost anything but particularly lifestyle and travel, which inspired her to start her own travel blog Leggett Around The World. She hopes to one day work in the magazine industry. You can follow her adventures on Twitter at @caitlynjleggett

Chris De Silva is a third-year Bachelor of Journalism student at La Trobe University. He is an avid follower of all things sports and has written for his own blog for over three years. Chris has aspirations of moving to the United States following his degree to pursue a career as an NBA reporter. He is also currently a staff writer for FanSided website King James Gospel. You can find him on Twitter at @cdesilva23.

Brittany Lyons is a third year Bachelor of Journalism student at La Trobe University. She has always been interested in writing but decided to pursue journalism after completing work experience at her local newspaper News Weekly. Brittany enjoys all things entertainment and lifestyle but also has a passion for legal studies and court reporting. She hasn’t made up her mind on which direction she will take first, but ultimately would love to become an editor at Cosmopolitan Magazine. However, before she does this, Brittany intends to conquer the world, starting with her first solo trip to Europe in June 2016. You can follow her on Twitter: @brittlyons_

Katherine is in the third year of her Bachelor of Journalism degree. She is currently a staff writer for upstart magazine and hopes to write about social, arts and cultural topics, although she would like to also explore the magnificent world of fashion and beauty. As a writer for The Tall Giraffe, Katherine’s focus has mainly been on social injustices and environmental changes within the world. She hopes to one day write for a non-profit, and publish something inspirational. Beyond university, Katherine still has not finished reading the Harry Potter books that she started at age eleven, but hopes to finish them within the next two years. You can follow her musings on Twitter: @kattt_mcleod.

Peter Di Stefano is a third-year Bachelor of Journalism (Sport) student at La Trobe University. Peter is an avid sports fan with a burgeoning interest in the field of international sport. This includes the summit of American sports, namely the NFL, NBA and MLB across to the overarching presence of football in Europe and South America. His other interests include politics, culture and business. He has worked as the media manager for the Northern Metropolitan Cricket Association (NMCA) for the past two seasons and was an integral part of the Festival of Cricket, which promoted the White Ribbon Foundation. Peter has also been a panellist on the NMCA radio show and the Winners Aplenty Big Sports Breakfast Show on 88.6FM. Peter will be attending the University of Missouri as an exchange student in semester two this year to further his journalistic education and enhance his opportunity of working as a broadcast media analyst in the US. You can follow him on Twitter: @PJD_1990.

Vivienne Duck is a third year Bachelor of Journalism (sport) student at La Trobe University. She has a particular interest in all things netball and football. Vivienne combines her love of culture and all things Melbourne by writing for Milk Bar Magazine. When she isn’t planning her next overseas adventure, Viv will be consuming all aspects of news. You can follow her novice twitter account @VivienneDuck.

Cait Kelly is a third year journalism student at La Trobe. She loves to write about politics, culture and current events. Cait is particularly interested in international relations with a focus on North Korea and spends a lot of time trying to perfect her Spanish tortilla recipe. She has written for numerous publications including Hijacked, The Point and Maggie Journal. You can tweet at her here: @caitkelly1.

Sevil Kaya is a third-year Bachelor of Journalism student at La Trobe University. She is amenable, open-minded, a tad too sensitive and an obsessive book worm. When she’s not burying herself in a new book, she spends time researching and writing about things she has a passion for, including societal issues, human rights, politics and international relations. As staff writer for upstart magazine she hopes to inform readers on a range of topics. With a view to one day being a controversial journalist, Sevil aspires to work in print and broadcast journalism. You can follow the Twitter rookie here: @sevilkayax.