As a new semester gets underway we welcome a new editorial team to upstart. 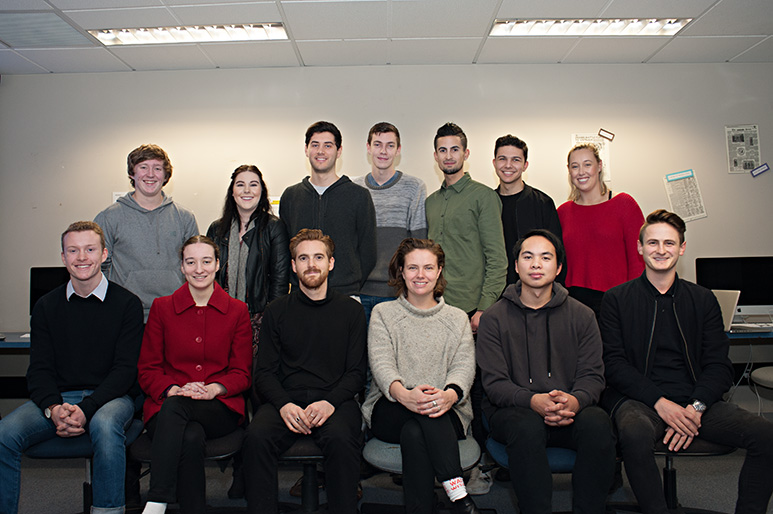 Cait is a third year journalism student at La Trobe University. She loves to write about politics, culture and current events. Cait is particularly interested in international relations with a focus on North Korea and spends a lot of time trying to perfect her Spanish tortilla recipe. She has written for numerous publications including Hijacked, The Point and Maggie Journal. You can tweet at her here: @caitkelly1.

Jim is a third year Bachelor of Journalism (Sport) student at La Trobe University. He grew up in country Victoria and loves playing guitar and is currently on a mission to find the best vegetarian taco in Melbourne. His sporting interests include AFL, EPL and NBA but he also loves film, technology, and music. Jim recently worked as an intern at Melbourne Web Fest and in the future hopes to combine his interests in filmmaking and journalism by making documentaries. His rare tweets are at @filesjim.

Deniz is a third-year Bachelor of Arts student (completing a double major in journalism and politics) at La Trobe University. His academic interests predominantly lie in history, politics and world cultures. As a self-proclaimed athlete, Deniz jokingly reckons he is capable of playing any sport to the highest level. Hoping to shed light on important societal issues through his writing, he shares an ambition of one day working abroad as a foreign correspondent. He has work experience at SBS Radio and is the founder of a global affairs blog titled The Carrier Pigeon. You can follow Deniz at @uzgundeniz.

Luke is a third year Bachelor of Journalism (Sport) student at La Trobe University. He currently writes for UK-based websites Chelsea Daft and GiveMeSport, where he completed an internship in early 2016. While soccer, tennis and Australian rules football consume most of his attention, Luke also loves to travel, play drums in his band and find new ways to conquer traffic on the West Gate Bridge. You can follow his Twitter account @lukemkarlik.

Matt is a third-year Bachelor of Arts student majoring in philosophy and journalism at La Trobe University. He recently completed an internship at UNESCO in Paris where he worked with the Head of Foresight in the Social & Human Sciences sector. His interests include 20th century French philosophy, gender studies, futures studies, design and politics. When he is not reading and writing, he is either skateboarding or playing drums in a rock and roll band. You can follow him on Twitter: @MattMarasco

Jesse is a second year Bachelor of Media and Communication (Journalism) student at La Trobe University. Jesse is from Mildura, in the northwest of Victoria. He has a keen interest in all things sport, in particular the Richmond Tigers, Los Angeles Clippers, Denver Broncos and Southampton FC. Jesse has a deep obsession with fantasy sports, in particular AFL SuperCoach. He also has a keen interest in politics both Australian and International. You can follow his ramblings on twitter at @Jesse3robinson

Thomas is a second year Bachelor of Journalism (Sport) student at La Trobe University. His interests stem from a sport-filled upbringing and include football, AFL and cricket. He writes about the world game at local level for The Corner Flag, MFootball and Outside90 and has had work experience with The Age. Thomas dreams of covering the English Premier League, perhaps in a role at the highly coveted UK based publication, Sky Sports. You can follow his quest on Twitter: @tomodell18

Marie is a second year Bachelor of Media & Communication student at La Trobe University, majoring in journalism. Ever since first being exposed to the theatrics of federal parliamentary question time at the young age of three, she has been obsessed with politics. She fuelled this obsession by joining the team at UniPollWatch for their 2016 federal election coverage. Outside of her studies, she loves watching quiz shows (shouting the answers at the TV whilst doing so, of course), reading political books and watching nerdy TV shows. You can follow her on twitter at @maztrev18.

Jarrad is a second year Bachelor of Media and Communication (Sport Journalism) student at La Trobe University. His passions include sport – mainly Aussie Rules and basketball, and when his ankles aren’t failing him he enjoys playing mixed netball. He has spent the past five years as a reporter for the Northern Football League. He hopes to enter the field of broadcast journalism following his degree, covering a range of sports and would love to travel to cover the Olympics one day. You can follow him on twitter at @JarradGardner

Molly is currently in her final semester of a Bachelor of Journalism degree at La Trobe University. Originally from a small country town near Echuca, Molly moved to Melbourne to follow her dream of becoming a journalist. Her ideal job would be a crime reporter, but she also has a great passion for lifestyle, photography and health/fitness, both in and outside of university. Molly hopes while working for upstart she will learn more about the industry and develop new journalistic skills.  You can follow her on twitter:  @Molly__Hancock.

Katherine is in the third year of a Bachelor of Journalism at La Trobe University. She is currently a staff writer for upstart magazine and hopes to write anything social, arts and culture and lifestyle oriented. As a writer for both The Tall Giraffe and upstart, Katherine’s focus has been on environmental issues and social changes worldwide. In the future, she hopes to shed light on important social injustices by writing for a non-profit, as well as having a book of her own published. Beyond university, Katherine’s bucket list includes finally finishing the Harry Potter books, and watching copious amounts of wrestling. You can follow her musings on Twitter: @kattt_mcleod.

Nathan is a final year Bachelor of Journalism student at La Trobe University. He thrives on content creation and is excited by the blending of graphical and textual elements to tell stories. He works in graphic design and marketing at Retrojan Designer Furniture and is interested in technology, city planning and sports. You can follow his occasional musings on his Twitter page: @oakley_nathan

Jerwin is in his final year of Bachelor of Journalism at La Trobe University. He loves multimedia aspects of journalism such as video editing and infographics. He enjoys consuming all things tennis and UFC, as well as investigative journalism such as the Serial podcast. In his spare time, he likes watching Survivor and The Walking Dead. Jerwin’s dream is to work in the professional tennis beat or possibly the mixed martial arts scene. You can follow him on Twitter: @jdeguzman_17