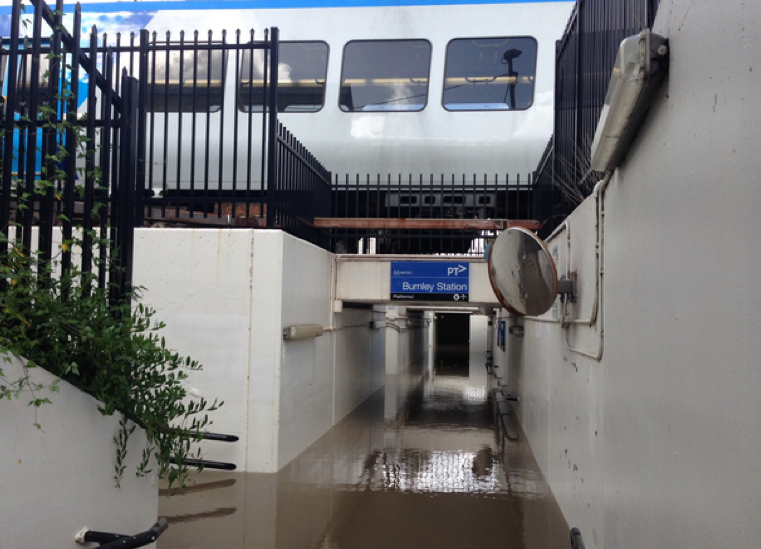 Melbourne braces itself as a powerful cold snap moves through the city.

Wind gusts of up to 90km/h, thunderstorms, hail and heavy rain are expected after a cold front swept across Melbourne in the early hours of Wednesday morning.

Though the rain may have eased, Melbournians have been warned that rain will likely continue throughout the day.

Temperatures are expected to reach a top of 13 degrees.

Metro Trains are not sure when it will reopen.

Bureau of Meteorology senior forecaster Michael Efron told the Herald Sun that forceful winds and heavy rainfall were felt throughout the city.

“The heaviest falls were in Oakleigh South with 57mm, Blackburn saw 53mm while Burwood saw 47mm. We had a band of heavy rain which moved through and we also observed some thunderstorms across the southern suburbs towards Dingley and Patterson Lakes,” he said.

“We also saw wind gusts of around 60 kilometres per hour around the bay-side suburbs.”

Melbourne is not the only Victorian city to be affected by the sudden cold snap. Following heavy rain on Monday, homes in Geelong and surrounding areas were damaged by flash flooding.

State Emergency Services were inundated with calls from 6pm onward. An SES spokesman told The Age that surrounding areas were also affected.

Blackburn: Citybound services have resumed stopping at Blackburn after earlier flooding in the station subway.

“About 200 calls came through, and that’s just over the last six hours as the storms passed through,” he said.

“The majority of those have been in the inner and southern suburbs of Geelong. Also, Bellarine Peninsula, Ocean Grove has been fairly hard.”

Showers are predicted to continue throughout the week.