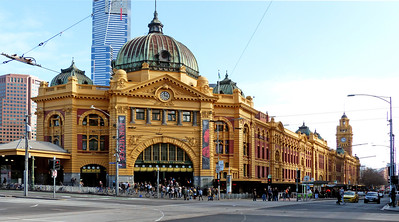 Melbourne is preparing to experience its coldest four day spell since 1996 as a wintery blast travels across the southeast of Australia from Antarctica, bringing temperatures no higher than 12C.

Starting in Tasmania, the cold front was expected to bring a -38C polar blast overnight before making its way to Victoria. Ski resorts across the southeast are preparing for a dumping of snow.

Maximum temperatures in Victoria will stay below double digits with the city expecting a high of just 9 degrees.

Some regions will experience temperatures below zero for the remainder of the week.

Weather Bureau forecaster Tom Delamotte told the Herald Sun that snow is likely to fall in some regions across the southwest throughout the day.

“We are seeing that very cold air moving across south western parts of Victoria at the moment and likely to see snow falling to fairly low levels, in particular around 300m in parts of the southwest,” he said.

Victoria has already experienced a dusting of snow in the early hours of Tuesday morning with snowfall reported in Colac and suburbs of Ballarat.

The temperature at Ferny Creek in Melbourne’s Dandenong Ranges dropped to just 0.7C on Tuesday morning with snow expected to fall throughout the week.

Gusty winds, rain, thunderstorms and snowfall is expected across the state with weather warnings possible throughout the week.

A severe weather warning has already been issued for areas in the Gippsland district with damaging winds expected today and strong coastal winds developing tomorrow.

While Mount Hotham and Mount Buller are anticipating a week of heavy snowfall covering the slopes, the ski resorts will be empty with Stage 4 restrictions in place across the state.

Sky News Weather chief meteorologist Tom Saunders told The Australian that the polar air travelling through the southeast of Australia was causing the icy conditions.

Photo: Flinders St Station Melbourne by Bernard Spragg available HERE used under a Creative Commons Attribution. the image has not been modified.