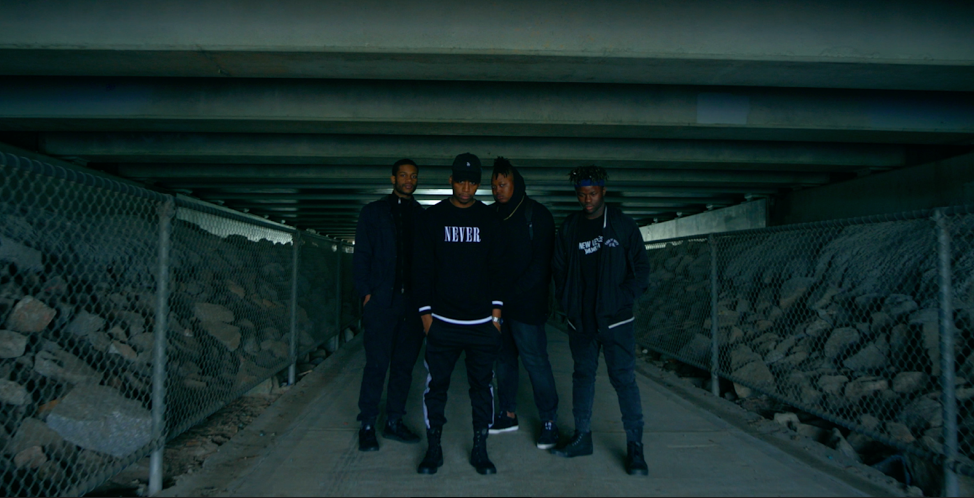 Zimbabwe-born hip hop artist Kudzai’s new single ‘4 Deep in the Suburbs’ provides another angle on the media’s pessimistic portrayal of African gangs in Melbourne. The song was uploaded to YouTube in August, and currently has 3,200 views, including reaching 155,000 people on Facebook.

The video begins with police sirens running over the top of footage of four African-Australian men walking the suburban streets. The lyrics offer a deeper insight into the lives of these men who face stereotypical challenges every day.

“The main message is racial equality. It’s a response to the over-representation of African youth crime in Melbourne,” Kudzai told upstart.

The track, featuring long-time friend and collaborator Tyaj Gonera – who goes by the stage name Papi – is an attempt to create something that not only resonates with the African-Australian community, but opens the public eye to the racist fear mongering circulating the Melbourne population.

However, Kudzai said it wasn’t his motive to swerve his music into a political discussion, and it wasn’t until the song started making waves that he realised he was in a powerful position.

“I first started making music to express feelings I couldn’t say in a sentence and to vent. It wasn’t until after the song was done and I played it for people I closely collaborate with that I knew what I’d actually created,” he said.

The artist said it’s not just the South Sudanese community that has been put into this undesirable spotlight. It’s something that migrants have had to endure for many years.

“This is what the media does. They’ve done it to every new group of migrants that have come to Australia. They will keep doing it. It brings them ratings and that’s really all they truly care about,” he said.

As Kudzai describes it, there’s a shift in the song where extracts of Channel 7’s headlines labelling African gangs are played, before Papi comes in with lyrics that dive into the situation head first.

“They love to judge by your colour, clothing and name. No matter what we’re all perceived as the same,” featuring artist Papi raps over the track.

After recent debate surrounding the prevelant issue, the Liberal Party raised concern about African gang crime throughout Melbourne. Since then, a political commentary has been established.

Music like Kudzai’s may not reach enough people to surpass the stereotype, but he is hoping it serves as a bridge for the labelling to come to a halt.

“I’m happy to see any publication covering it. If the song is really helping improve the situation or creating a conversation where something positive can happen then it’s all good to me,” he said

Videographer Jamal Twycross-Smith produced the film clip for ‘4 Deep in the Suburbs’ under the producer name Jamaru Digital, and is pleased to know his video can offer “power and clarity” for the issue at hand.

“Being of a multicultural background myself, I was saddened to hear that certain minorities in Melbourne and Australia are feeling attacked and marginalised by the public and mainstream media outlets,” he said.

“I really saw it as an important and fresh perspective to promote, which really helped us find the direction of the video.”

The video, which sees Kudzai, Papi and two friends of African-Australian descent purchase goods from a local supermarket among the glares of ongoing shoppers, then shows the men delivering the food to homeless people throughout the city of Melbourne.

“I warned Kudzai that there might be backlash about him wanting that on camera, people might think he’s just trying to look good for the cameras,” Twycross-Smith said.

“We then spoke on the fact that with media showing so much footage of African youths committing crime, it felt quite important to present some alternative and of course, honest imagery.”

Twycross-Smith said the comments that can be seen on online videos relating to African gangs had so much conflict and anger amongst different groups of people, and that multiculturalism is one of Melbourne’s “greatest attributes” and society shouldn’t be bashing each other due to the colour of their skin or race.

“We won’t stay quiet when anyone tries to challenge those values with negativity,” he said.

Although both artists have said feedback and appreciation for the song and music video has been good, there’s still a long way to go to ensure positivity runs through all the comments on social media – something that is still an issue in society today.

“Kudzai and Papi have done a really good thing here and I’m glad to have played a big part in helping them realise this vision,” Twycross-Smith said.

The song is the first single off a new mix tape Kudzai is planning to release later this year, and can be found on music streaming apps Spotify and Apple Music.

Look out for the video for the new song ‘Love You Better’, a track which Kudzai is hoping people can relate to, and reach an audience he would have never dreamt of.

Kristian Amenta is a third year Bachelor of Media and Communications (Sport Journalism) student at La Trobe University. You can follow him on Twitter @AmentaKristian