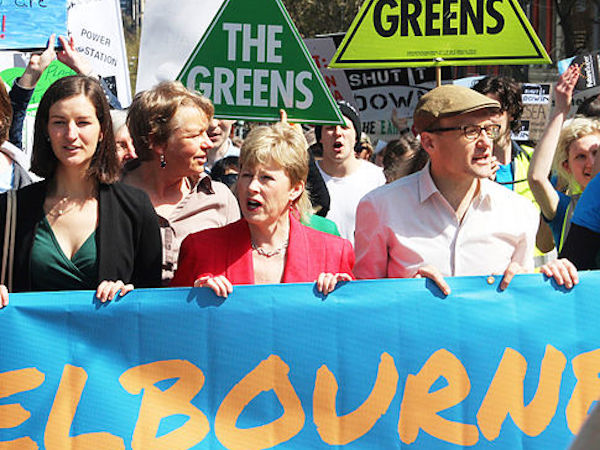 Victorian senator Richard Di Natale has replaced Christine Milne as leader of the Greens, becoming the first non-Tasmanian leader of the party.

The Australian Greens Party was born out of a protest campaign against the Tasmanian Hydro-Electric Commission’s proposal to dam the Franklin River.

The campaign began in 1979 and was led by Bob Brown, who was then a young doctor. After four years and 1,272 arrests, the federal government intervened to prevent the damming of the Franklin.

The Greens said the event “galvanised a generation of protesters and energised people who would become the leaders of the next major political party of Australia – Bob Brown and Christine Milne”.

Commentators often describe the Greens as tree-huggers, radicals and even “lunatics, idiots, imbeciles“, but the party has grown and established itself as a serious political contender, moving away from it’s once radical activist image.

In fact, the party’s stronghold is now inner-city Melbourne.

Since the federal election in 2013, national support for the Greens has risen from eight to 12 per cent, according to Newspoll. In Melbourne, that percentage is significantly higher.

At a local level, the Yarra City Council has the strongest Greens presence in the state with three out of nine councillors from the party.

“I think the electorate is very smart. They tend to be well educated, they tend to be very interested in election-type issues,” he says.

Nick Economou, Senior Lecturer at Monash University, has echoed Gaylard’s sentiments, purporting that the core constituency of the Greens is “young, well-educated and clustered in the inner suburbs of most of the Australian capital cities”.

Although there is no statistical proof that tertiary-educated people are more likely to vote for the Greens, the 2011 census shows that 45 per cent of those in the City of Yarra hold a bachelor degree or higher.

Yarra City also has the highest proportion of residents attending university at 25 per cent, and the state’s youngest median age at 28 years.

“I’ve got large pockets of public housing [in my ward] and I think the Greens policies are very attractive there,” he says. “It’s not an elite, it’s across the electorate.”

The Melbourne electorate has just 14 per cent home ownership, the lowest proportion in the state, and the highest proportion of flat and apartment dwellings at 81 per cent.

According to 2011 census data, 68 per cent of Melbourne’s inner-city residents are migrants, more than double the national average of 26 per cent.

Most notably, 26 per cent of those employed in the Melbourne electorate catch public transport to work and five per cent ride a bicycle. Only 16 per cent of households possess two or more vehicles.

The Greens’ constituency contains a disproportionate number of students, migrants, renters and those who rely on public transport.

Hence it seems fitting that Richard Di Natale, a Melbourne doctor who studied at both Monash and La Trobe University and is the son of migrant parents, has been appointed to lead the Greens.

He has attempted to present himself as relatable, stating in his maiden speech that he’s “not an ideologue” and doesn’t have a “dogmatic view”.

“I’ve always believed that the Greens are the natural home of progressive mainstream voters,” he said, which seemed to confuse some.

@susanamet “Progressive” makes it sound not mean “Mainstream” reassures everyone not really progressive at all “Values” – always a winner.

@love0ntoast Potential. But this “progressive mainstream values” thing is (a) a three-word slogan and (b) puts me in fear.

“I imagine he’s saying that we’re not on the extreme of the environment movement, that we’re much more sophisticated and complex, that we have progressive policies but it doesn’t mean they have to be reactionary policies,” Gaylard says.

“There’s a lot of progressive people out there who are interested in the whole range of environmental, social, health and welfare type issues, who see themselves as progressive and don’t see the Labor Party as representing those values.”

The Greens came very close to taking the seat of Brunswick in the Victorian state election, a seat that Labor has always possessed. They narrowly took Prahran with a five per cent swing, the first time the Greens have ever taken a seat from the LNP.

However you perceive them, the Greens are disproportionately popular in Melbourne and appear to be gaining traction amongst an urban demographic. Garnering support from voters in suburban and rural areas is the next challenge for the Greens, which will either legitimise or break the party.