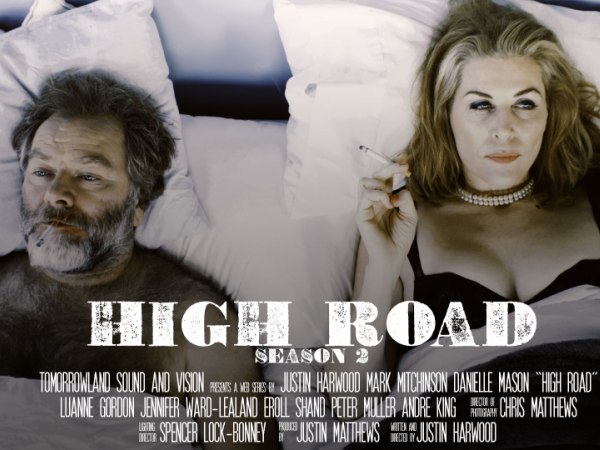 Terry is an old, washed up English rock star. In a bid to change his life he moves to New Zealand and starts a local community radio station out of his caravan in the campground. Trouble is, the locals don’t like it.

Justin you were a bit of a rocker in the 80s and 90s yourself, is this where some of the inspiration for Terry’s character came from?
I think I drew a little from 15 years on the road for the scene backstage and the naked band mate. But it wasn’t really autobiographical. I just liked the idea that Terry being a famous rock star, still can’t get his shit together.

Why should people watch your series?
People should watch High Road because it’s a simple unrequited love story, and who doesn’t like a story about not scoring?

What do you want audiences to take away from your series?
I want people to laugh and enjoy Terry’s journey, which is one of a cock-eyed optimist who doesn’t have any self-awareness.

How do you reach your audience?
We just made a website and Facebook page and sent it around to friends who shared it. We didn’t really do anything more than that, as it kinda started as a fun thing that we didn’t have any expectations of.

How long have you been making web series for?
High Road is my first web series. I have written a couple of books and have been making commercials and online content for about 12 years, and making a web series was just something to try.

When are you completely satisfied with your work?
I don’t know if you’re always completely satisfied because you can always see the things you should have done better, but it is awesome when people enjoy it and pass it on, share it. That’s all you really want, a happy viewer. Because, really, what other reason is there to make anything?

Describe the ultimate fan of your series?
I have people who write to me with quite detailed breakdowns of the characters, with back stories and everything, which I think is totally brilliant because it makes the story for me even better. I would love to one day make an episode or two from this feedback.