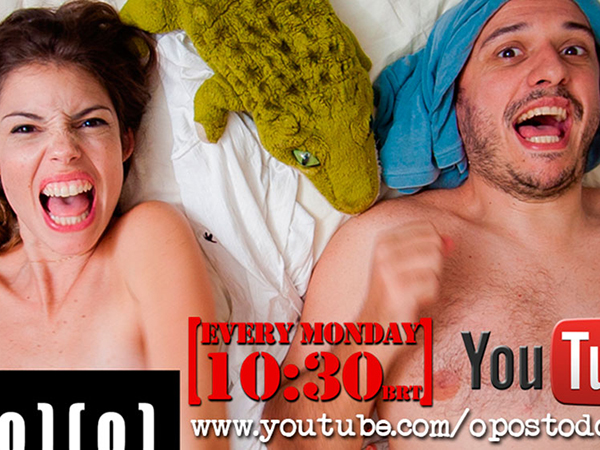 A Brazilian webseries created by Leandro Correa, each episode illustrates a different ‘attempt’. Some special episodes are the other way around: the wife is trying to have sex with the husband who has other interests in mind.

How do you finance your series?
We don’t (giggles). We covered all the expenses from our own pocket, none of the team got paid. We got the support of a sex shop from the slums nearby that provided us the sex toys and inflatable dolls used on some episodes.

What do you love most about using comedy and the theme of sex?
Comedy is an easy theme to produce and for others to share. Dramas requires audience specific moods to be enjoyed and since most of our work is viewed on mobile screens on the run, it’s hard to make it work. And even thought I love action movies and series, they’re way to expensive and toilsome to produce.

Why did you choose the reoccurring theme of sex?
We chose the theme of sex because it’s catchy, easy to write and understandable on a worldwide level.

Are there any web series, other than your own that inspire you?
I think all the success that Jason Leave has achieved with ‘Out With Dad’ web series and Jonathan Robbins’s ‘Clutch’ give me fuel to keep me going.

Describe the ultimate fan of your series?
There is a kid, not sure of what age, that comments on every single one of our videos. Even thought our show had sex in it, it’s not remotely pornographic and 90% of the episodes can be enjoyed by all ages.

What’s special or different about your series?
First of all, the quantity of episodes: we produced 85, releasing one per week since September 2013. It looks really professional because we hacked our US$300 camera from 2008, a Canon 50D, that isn’t even supposed to shoot video, to record RAW Video at a quality close to a Black Magic Cinema Camera, worth at least US$ 2,000.00.

How many people worked on this project?
We have a team of 5 on set. A director/cameraman, two actors, one producer to write the times of the takes and a sound operator. Throughout the years, we had some replacements for different recording days and about 12 people at most got involved in the project.

What was the biggest challenge you had to overcome making this series?
Writing for comedy every week for 2 years is hard. We always look forward to escaping the clichés. Also, we tried to rehearse the episodes at least twice before recording, but as time passed by, it got more difficult to rehearse before shooting. But the biggest challenge is always making the team (that is working for free) involved with the project for as long as it lasts, and we got that, so I’m very happy about it.

What’s the magic formula for a successful web series?
Being very professional. If I can produce high quality episodes without extra-burdening my crew that is working for free, it will last longer. People will be happier making the end result the best they can.

In what ways do you utilise social media to further your brand?
In every way I can. We promoted posts on facebook, had a party when we completed our first year of the series and we send the episodes to blogs and other fan pages that have a similar audience to ours.

Opsoto Do Sexo on the web: