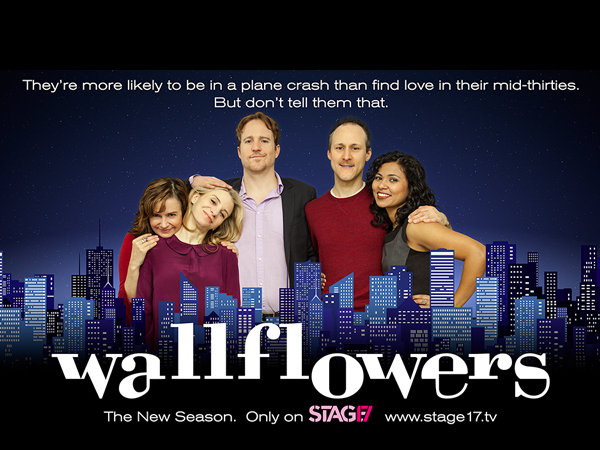 Set in the witty, cruelly comedic dating world of NYC, Wallflowers escapes the typical format of a web series and holds onto the long form narrative usually seen on TV. The series follows a tight knit group of jaded but hopeful Gen-X stragglers coping with the ecstasy and agony of single life. Nearing 40, they’ve found themselves single well past their “sell-by” date. Yearning for change, they seek out self-described “dating guru” Janice Ackerman, who’s vowed to find love for each and every one of her students, even if it kills them.

In between seasons, you shot a series of ‘minisodes’. What was the purpose of these ‘minisodes’ And do you think the ‘minisode’ is a concept that could benefit all web series?

We had amassed a nice following for the show in those initial five episodes and I was afraid of losing them because there was no new content. I thought minisodes would be a fun, inexpensive way to keep that relationship with our audience. We shot two different kinds of minis, dating videos for our regulars, and a spinoff show called “Ask Janice,” which was an advice blog from our dating guru. They were all shot in one day, very inexpensively, and gave us 12 weeks of content.

I can’t speak for every web series, because we’re all different, but in the case of Wallflowers, interest did not seem to be as high for the minis as they were for the full episodes (which blows the theory that people only want short content). I think Wallflowers had established a very specific “brand” in its first season, which was longer, more intricate episodes geared towards a traditional half-hour television comedy, as opposed to “skits,” so it’s possible that our audience was looking for more of that. I’m glad we did them, because I think it showed our audience that we were in it for the long haul, but I also think minis or spin offs are better geared to series with a more interactive element to them. The good news is, they’re cheap, so there really is no downside to doing them.

What and/or who inspired your series?

As far as wanting to make a web series, I would have to say “The Outs” showed me that people were doing this kind of format in a very professional way. I wasn’t interested in doing cheap schlock and most of the (limited) web series exposure I’d had prior to that was really drab and ugly and looked and sounded terrible. But “The Outs” looked very close to indie television and I thought if that’s what the medium was able to sustain, then I wanted in.

As a content creator, where to you go to find information about other filmmakers and web series

I’m going to be an awful person and say I really dislike watching things on my computer unless I have to (I know). So probably YouTube is where I watch most web series content. But just being part of the community really helps my awareness. Going to these festivals, meeting the creators, getting to see an episode of their show, really makes me motivated to then go home and watch more. So I hope that when Wallflowers plays these festivals, if the audience likes what they see, they will do the same. I would, however, love to see more channels dedicated to quality web programming that you can watch on your television if you choose to do so.

What was the biggest challenge you had to overcome making this series?

For me there were two things, but probably the most challenging aspect (which continues to this day) is actor availability. Shooting in NYC when you don’t actually live there, is also a huge pain in the ass, but I really wanted to take advantage of the wonderful pool of theater actors I both knew and loved watching on and off Broadway, so I committed to the idea of shooting there. I don’t think I would set another series in a city in which I didn’t live, but I stand by the decision to do it for Wallflowers.

When are you completely satisfied with your work?

I am never completely satisfied with my work. There is always room to do better, be better. That doesn’t mean I think my work is bad or unworthy, but I always want to improve and challenge myself.

What is your favourite thing about making web series?

I don’t need anyone’s permission to do it. I don’t have to pitch it to anyone, I don’t have to make changes based on executives’ whims, I don’t have to be told to make a character heterosexual because it will sell better. In short, I don’t have to be worried about being told “no.” I get enough of that in the other things I do and it can be defeating and demoralizing and it’s nice to know there’s an outlet to just play. And maybe no one is going to watch it, but you never know.

What’s your background as a content creator? And how did you approach this project differently to previous projects?

First timer in the web arena. I’m primarily a film director with a recent concentration in documentary, and as a day job I do film marketing. I’m not sure that I really had a very different approach in the writing or making of the project. I think that this was the first project where I was in full control of the marketing and distribution and learning how to come up with strategies to get eyeballs on the show without being able to rely on anyone as a partner who had done it before and not really being able to even reference examples of how to do it. We are all pioneers. The class of 2010-2014 of web series content creators, we’re all figuring it out as we go and hopefully, we’re writing the templates for others to follow.

Wallflowers on the web: