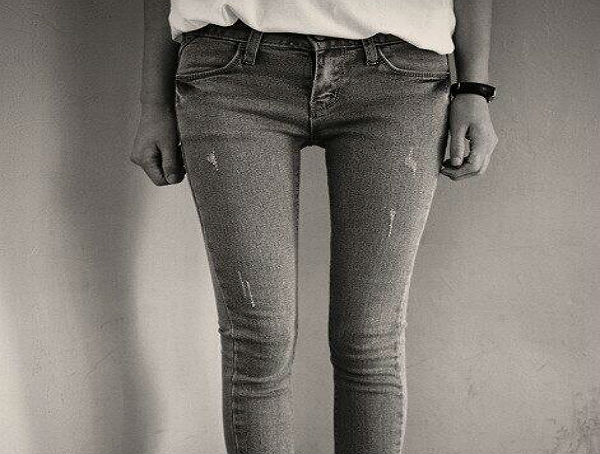 It’s well known teenage girls have been significantly impacted by the current representation of women. Some start drastic diets; exercise excessively, and in the end, a small portion may begin to develop preliminary symptoms of anorexia.

With this ‘”thinspiration”, the latest internet craze has been born – the thigh gap.

The trend – considerably prolific in the teen population- revolves around the space between a girl’s thighs, ensuring they don’t touch above the knees.

It started, as always, with impressionable youths attempting to imitate celebrities, with the likes of Eleanor Calder or Cara Delevingne inspiring this current obsession. (You can even find a Twitter page called @CarasThighGap)

“@dambaek: Too much time in Trend & Design Lessons…..@CarasThighGap http://t.co/6KkjlesUHW”wow thank you so much for this!! its amazing!!

In some instances, thigh-gappers share their pictures online, finding support amongst waging war on food and flabby limbs.

Some of them are pro-ana’s (people who support anorexia), but others are just young girls who want to be as skinny as their idols.

The problem is that manicured walking mannequins like Cara Delevingne earn their living thanks to their slimness, so most of them have a natural thigh gap.

If not naturally blessed, some are resorting to potentially dangerous measures to achieve a desired aesthetic goal.

One international cosmetic clinic said they’ve seen a 240 per cent rise in demand for procedures that freeze fat cells and accentuate thigh gaps.

More and more girls are taking desperate steps in the name of fashion, however such motivations are hardly new.

“For years women have been preoccupied with their thighs. Now it’s just getting reinvented under a new title.”

Trying to have a thigh gap if you are not born with it can be a huge risk to your health, and is nearly impossible to achieve.

Yet, still, more and more are turning to surgical means to get the latest look.

“The thighs are one of the most common areas that liposuction is done, especially today with more people opting for hip-hugging clothes” explains senior cosmetologist Dr. Mohan Thomas.

The surgery doesn’t come cheap; with it costing between $2,000 and $5,000 for a typical inner thigh and knee liposuction.

The truth is: thighs have always been a big concern for girls, whatever their age. Too slim, too big, too flabby or too much cellulite; this fascinating is far from new, despite it being more prominent on social media today.

And, as with most things, the best course of action is to eat healthy, exercise, and love our bodies for what they are regardless of whether you have a thigh gap or not.