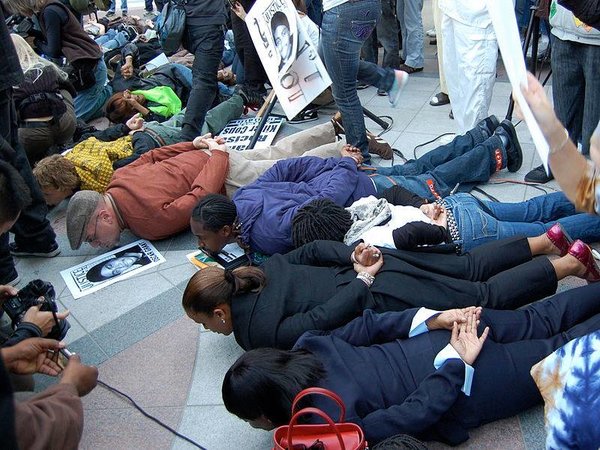 Exactly one year after the death of African-American teen Michael Brown, the U.S. has declared a state of emergency after four gun incidents occurred in less than 24 hours.

Ferguson, Missouri is the latest to be in the firing line.

On Sunday night, Ferguson’s streets were peppered with bullets during a live interview on CNN. 18-year-old Tyrone Harris was critically injured by police after he allegedly fired at them.

This evolved from seemingly peaceful protests that were in honour of Brown, who was shot dead at age 18 by policeman Darren Wilson. The altercation occurred in August last year after Brown robbed a convenience store. He was shot 12 times.

Harris, said to be a friend of Brown, has been charged with assaulting officers.

Protesters can later be heard chanting: “We [sic] ready for war.”

Missouri Governor, Jay Nixon, has called for peace after describing Sunday as a “sad day of events”.

The incident was the third of four shootings to occur in Ferguson that day. A man was earlier shot in the arm and another man shot in the foot.

At 2am on Monday, two men, who were standing where Brown had been killed, were shot in the chest.

Three police were injured and a journalist at the scene was attacked and robbed.

The BBC report that 50 people were arrested on Monday outside of a St Louis courthouse in an act of civil disobedience.

Kayla Reed, an arrested protestor, told Reuters that there isn’t a fear of arrest. “We understand all this is necessary toward the goal of creating an accountable police department,” she said.

Whether the issue stems from their failing gun laws, or lack of cultural acceptance, there is no denying the trend of white officers shooting black Americans.

It’s difficult to imagine this happening in Australia.

14 Indigenous Australian prisoners died in incarceration between 2009 and 2010. According to The National Deaths in Custody Program Monitoring Report, this is the highest number on record.

Between 1979 and 2011, 32 deaths of inmates were recorded in the Northern Territory, 24 of those were Indigenous Australians. 33 of the 159 recorded prison deaths across Australia from 2008-2011 were people of Aboriginal decent.

African-American people, though, are three times more likely to be killed by police than Caucasian people. Of these, they are “twice as likely to be as unarmed as white people”.

Leading Senior Constable Bernadette Cowley of Echuca Police tells upstart the correlation between race and police violence is not an issue in Australia.

“[America’s] laws are their issue. Anyone can bare arms,” she says.

“What we do here seems to work. Not everyone can carry a gun. As police, we are trained to try alternatives before pulling out a gun. We do it as a last resort, when someone’s life is in danger. [American officers] draw their weapons at a routine car check,” she says.

In 17 of America’s most populated cities, police killed black men at higher rates than the total U.S. murder rate in 2014.

“11 people were shot by police in Victoria last year. That’s 11 too many,” Cowley says. “In the States, officers have to assume everyone is carrying a firearm. It’s out of control.”

Ferguson is a microcosm of what happens in America on an almost daily basis.

224 days this year have passed, and so too have at least 197 black people by law enforcement.

An unarmed 19-year-old NFL hopeful was shot and killed by a rookie officer last Saturday in Dallas.

In February last year, Yvette Smith was shot by Deputy Daniel Wills after calling 911 during a domestic disturbance.

Trayvon Martin was posthumously placed on trial for his own death in 2012 after being shot and killed by George Zimmerman.

The cases are endless.

When asked if she would still be a police person in Australia if our gun laws were as blasé as America’s, Cowley said she probably wouldn’t.

In that time, she has only had to pull her gun three to four times.

“Each time I’ve thought ‘Fuck, I may have to actually use this thing’, it’s not a nice feeling.”

Statistically speaking, these shootings and lives lost will continue, in just another day in America’s marred and bloodied history.