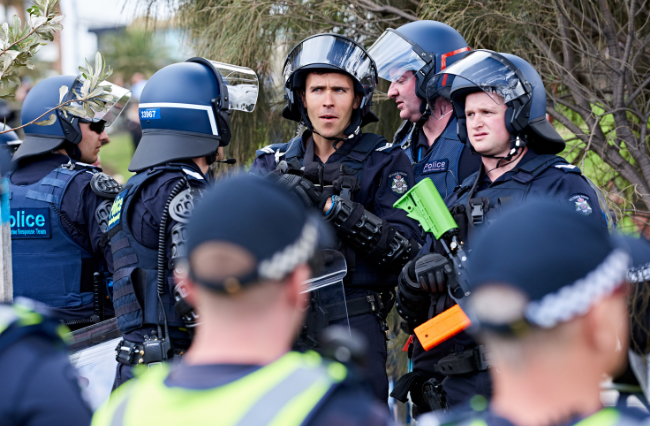 Treasurer and Industrial Relations Minister Tim Pallas said thousands of construction workers have been stood down due to a “widespread non-compliance” across the industry.

The government also blamed “the appalling behaviour on site and on our streets” for the shut down of sites across Melbourne, Ballarat, Geelong, Mitchell Shire and the Surf Coast Shire which came into effect last night.

Protesters have vowed to continue protesting the mandatory COVID-19 vaccinations today with crowds of 150 building on Elizabeth street at 10 am this morning with police on horseback moving in to contain the demonstrators.

Authorities have urged people to avoid the intersections between Elizabeth Street and Victoria Street as many of the hundreds of protesters are without masks.

Yesterday, riot police made several arrests and were seen shooting rubber bullets towards the 500 protesters outside the CFMEU headquarters in Melbourne’s CBD.

This morning on ABC Radio Melbourne, John Setka said the actions of a number of “professional protesters” who were seen throwing milk crates and beer cans at John Setka as he confronted the demonstrators on Elizabeth Street yesterday were “unforgivable”.

He said he believed only a small number of the 500 “anti-vaxxers” protesters outside the CFMEU headquarters in Melbourne’s CBD were union members and that some were not even part of the construction industry.

“A small part of our membership were there but the vast majority, I wouldn’t even know who they are,” he said.

John Setka rebuffed claims that his industry brought the shut down on themselves saying his industry was too big to ensure all compliance measures on site were followed throughout the pandemic.

“You can’t throw anything into the one basket. We as a commercial industry, we have kept our industry safe, we’ve got so many counter measures in place. They call it world’s best practice,” he said.

John Setka has stood on the fence regarding the Victorian government’s decision saying he doesn’t support the vaccine mandate and “banning people from site is very harsh” but that he has always been “pro-vaccine”.

“We run radio ads encouraging our members to go see your GP if you’ve got any concerns, and get vaccinated,” he said.

“Rather than force people to be vaccinated, we should take them on a journey, have that conversation with them and try to convince them.”

Victorian Opposition Leader Matthew Guy opposed the construction shut down which he said will cost billions of dollars a week saying instead, the government should impose rapid testing on building sites.

“The situation now needs union leaders and the government to sit down and calm the situation down and more the point to bring rapid testing onto building sites so that we can see which ones are the problem and shut those sites down a site-specific basis,” he said.

PHOTO: Melbourne riot police by Julian Meehan is used under a CC BY 2.0 licence and is available HERE.