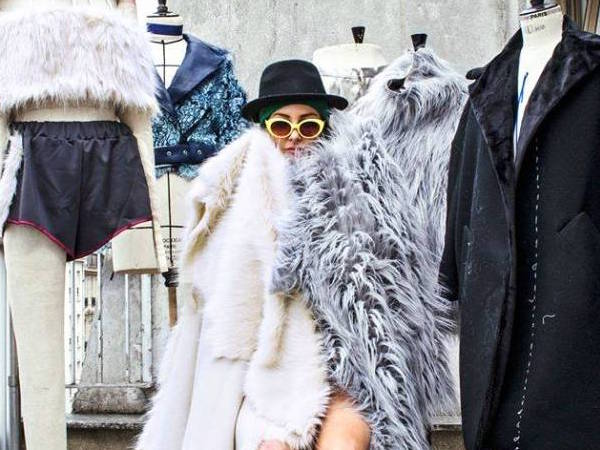 Torn between fine arts and fashion, designer Bella McGoldrick was lured by the RMIT reputation.

“I was always a creative and when I was leaving school I found myself deciding between fine arts and fashion design,” McGoldrick tells upstart.

“I suppose it was getting accepted into such a prestigious course at RMIT that helped make my decision. And so here I am finishing four years later.”

McGoldrick hasn’t given up entirely on fine arts, she sells customised portrait illustrations in her spare time.

Having spent time studying at Parsons New School of Design in Paris last year, she is no stranger to reputable fashion institutions.

She flourished during her time at Parsons, winning the Sophia Hallet Junior Design Prize for the collection she created, and co-curating a student exhibition at the Musee Le Pavè D’Orsay.

“The teaching style is very different, it’s a lot more creative and ‘conception-ally’ open,” she said of her time at Paris College of Art.

McGoldrick says studying fashion provides her with the opportunity to create freely.

“I am in the position at the moment where I can create without having to worry about selling or the market, which gives me so much freedom.”

She says her current collection aims to project the exuberant aspirational images we’re told to aspire to and their falsity when compared with reality.

“This collection stems from the power and manipulation the luxury, high-end fashion market has on desire,” she says.

“My inspiration comes from emotions and moods that set up for a feeling I want to evoke in my work. I design from a feeling to generate an emotional response in some way or another.” 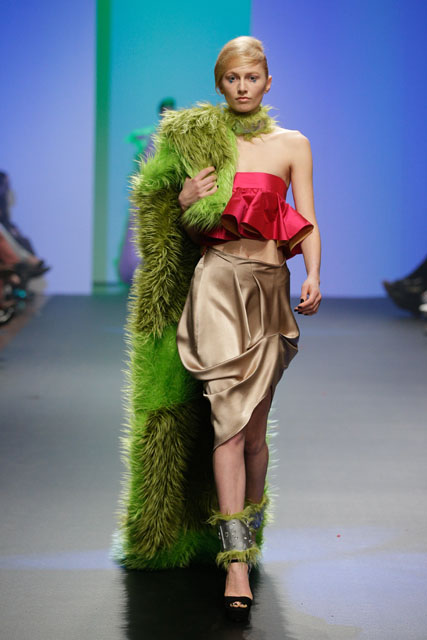 McGoldrick says she likes to see the lighter side of the fashion industry.

“I don’t think the industry should be taken too seriously all the time, so I like to play with my designs and hope others can enjoy them as much as I have enjoyed making them.”

“It can be challenging to stay true to my own philosophy and to know when is the right time to take advice and when to ignore it,” she says.

At this year’s MSFW, McGoldrick’s designs were showcased alongside her RMIT classmates at the emerging designer runway on Sunday night.

One particular piece involved hand sewing 9,000 rhinestones, which took over 150 hours to complete. 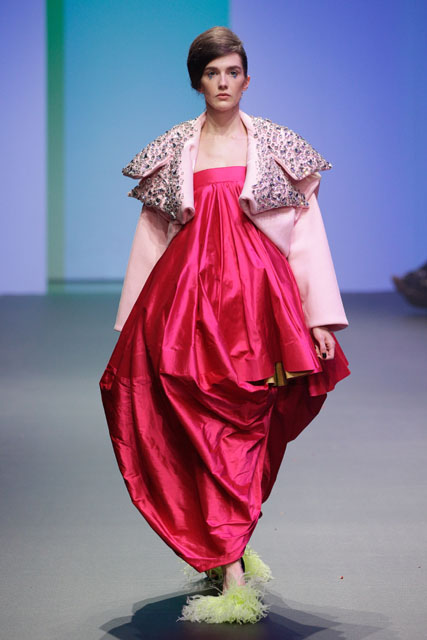 But McGoldrick understands that nothing comes easily.

“Hard work will take you wherever you want to go.”

And with this attitude, her ultimate dream to be a head designer at a luxury fashion house may not be too far out of reach.

However, she’s currently focusing on finishing the year and finding a real job.

“I’m still starting out, ignorance is bliss,” she says.

See McGoldrick’s work here and get social with her here.

The upstart Culture & Lifestyle team will continue to profile up and coming designers who will feature in a range of events at MSFW. Stay tuned for these profiles over the coming week.