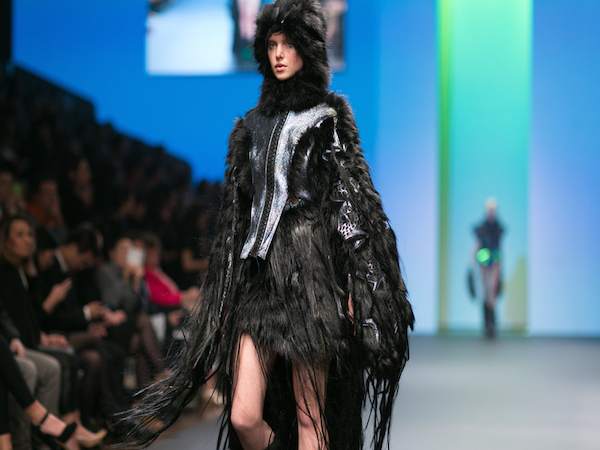 She became hesitant to pursue a career in fashion.

But, her school’s art supplies store room, which she often raided with a friend, soon became her haven.

She recalls the excitement of exploring the various materials at her disposal, which helped her creativity flourish.

“I’ve always been super experimental in the way I work,” she tells upstart.

“I just sort of find whatever materials I have in front of me and try to orchestrate something magical.”

Dix says her grandmother was an artist and a significant inspiration to her as a designer.

“She taught me to draw and I’ve found a way to make a portrait come to life on the body.”

“I find that my brain doesn’t shut up. Every time I see something, I think ‘that would look awesome on a sleeve!'” she says.

“It’s kind of taking over my brain, and I find it hard to switch off from fashion mode.”

However, she says inspiration doesn’t always come easily. Endeavouring to become more commercial has taken its toll on the work she’s produced.

“The past three years I feel I have been creatively held back trying to position my aesthetic in a mass produced commercial way.”

She says her mentor has encouraged her to experiment with alternative materials such as liquid latex, modelling clay and metallic paints.

“I have been able to develop as both a designer and a person, and discovering how strong my aesthetic has become.”

Dix’s designs were on full display at the RMIT Emerging Designer Runway on Sunday night.

Her current collection incorporates a voguish array of elements such as metallic leather, pearlex sequins and bug wings.

It also showcases metallic blue faux fur, her own creation that has become an iconic feature of the collection.

“At the moment I am really digging all things metallic. There’s something about the twinkle that catches my eye,” she says.

“My ideal character for my label is someone who doesn’t care if the media says florals are in season or not [and] takes responsibility for feeling totally badass in what they are wearing and have fun while doing it.”

Dix has survived on two hour sleeps this past month, tirelessly sewing 5,000 hand-made beads, but she says she’s loved every moment. 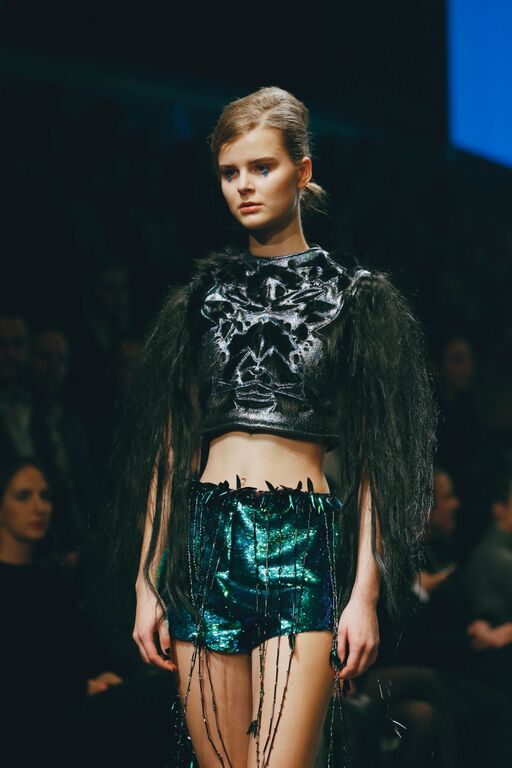 “Executing this collection in such an experimental way is a constant reminder that I absolutely love what I do. Seeing a hall full of people all with their eyes on my work is something priceless,” she says.

“On a big scale like this, being able to touch and inspire people with fashion creative encouragement is why I do what I do.”

Once fashion week is over, Dix will continue to work on her honours thesis, which focuses on how fashion rebels against historical movements.

“I want to create ready-to-wear pieces for a commercial market, to support the visions of my more extravagant one-off pieces that drives my complete utter passion for what I do,” she says.

“Fashion absolutely rips you a new one. It takes away sleeping patterns, the outside world and kicks you when you’re down, but it’s like a drug, once you’re hooked you just cannot stop making your imaginations into physical entities.”

Dix’s success is a testament to her drive and determination.

Perhaps she also owes some of it to her high school days, dabbling with supplies from the art room.

“Sometimes people can’t understand your dreams you’re trying to conjure up,” she says.

“No matter what your visions are, keep fighting for it because one day it will be heard.”

This concludes the upstart Culture & Lifestyle team’s profiling series of up and coming designers at MSFW.

Tijan Biner is a third-year Bachelor of Journalism student at La Trobe University and the Culture & Lifestyle Editor for upstart. You can follow her on Twitter: @tijanb.