The housing chain reaction is leaving many without security. 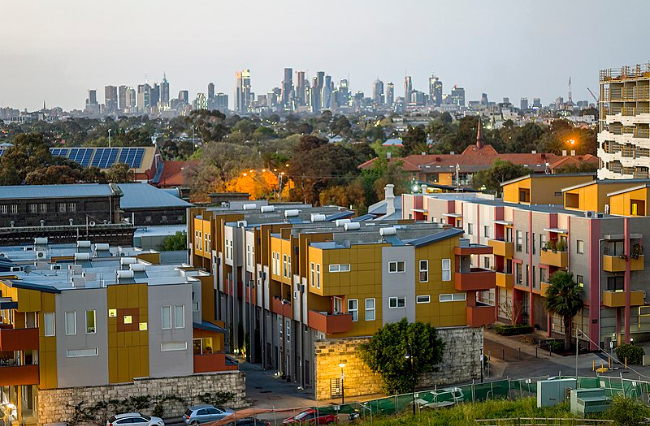 Maddy Perry isn’t a fussy tenant. Then again, you can’t be as a university student. Spend too much time being picky with accommodation and you might just be waiting forever ‘til you find that four-bedroom inner suburban family home within your price range.

And while investors bid up the prices of existing homes and rentals, people like Perry are having to make do. And to make do, she’s working three jobs to pay off her rent while studying full-time. Her last rental was a four-bedroom house she shared with her current three housemates. It was affordable, but at times unbearable when their landlord failed to meet basic living standards.

“We didn’t have any cooling and we would be emailing them and texting them every day, asking if they could do something about it, because it’s our legal right to have some sort of cooling and heating,” she tells upstart.

But during last year’s stage four lockdown period, they were given a two-month eviction notice, which left them scrambling to find another home in an increasingly competitive market.

“It was so difficult to find anywhere, and everywhere we went there were a thousand people at the houses. If they weren’t [there], the house was mouldy and not really liveable,” she says.

When Perry and her housemates found somewhere to live, the cheapest place in the area was a downsized three-bedroom house with an asking price $400 higher than their previous rental.

“We were willing to do quite a bit to get some sort of security.”

Like many Australians, Perry is enduring one of the worst cost-of-living crises in recent memory.

Treasurer Jim Chalmers has accepted that a big part of that inflation problem is “skyrocketing” rents, while Greens-commissioned research from the parliamentary library found that nationally, rents have risen above pre-COVID levels, jumping an astonishing 13.8 percent in the past year.

Those numbers come after the Green’s August proposal to call a nationwide two-year rent freeze. But it’s fallen largely on deaf ears, with both major parties ruling it out ahead of this year’s budget. While a rental freeze would relieve tenants of significant rental stress in the future, it alludes to a greater problem within the housing system which has been brewing for years.

What’s happening to the renting sector reflects the state of homeownership in Australia. Homeownership is at 67 percent, down from 70 in 2006. But between 1981 and 2016, home-ownership rates among 25–34-year-olds fell from more than 60 percent to 45 percent.

In that time, Australia has seen a trend in housing policies that Dr Andrea Sharam from RMIT says benefit current homeowners over everyone else.

“I describe the policy for the housing market as having one foot on the accelerator and one foot on the brake. So, it’s not a particularly coherent system,” she tells upstart.

Australia’s laws on housing make it easier for investors rather than homebuyers. We have some of the most lax laws in the Organisation for Economic Co-operation and Development (OECD) when it comes to housing. Tax incentives such as capital gains tax and negative gearing help push the perception that housing is a form of wealth creation. John Howard introduced a 50 percent discount on capital gains in 1999, meaning investors only paid half of their unearned income on tax. Negative gearing in Australia allows you to offset your net rental losses against other income you earn.

Dr Sharam says these policies helped fuel a wave of housing speculation, a practice that sees housing as something to be bought, sold, and flipped with the notion that prices will continue to rise. This attracted the wealthiest income earners to invest and priced out potential homebuyers.

“People are in the game for those unearned capital gains. The negative gearing is like the icing on the cake,” she says.

A report by the Grattan Institute claimed that long overdue changes to negative gearing and capital gains tax would save the government around $5.3 billion a year. The report suggests the discount on capital gains should be reduced from 50 to 25 percent, and investors should no longer be able to deduct losses on their investments from labour income.

Zac Russell owns multiple investment properties in Melbourne. He has gone from 40 percent vacancy in the middle of COVID, to having filled all those this year. While the pandemic saw a steep decline in rental price listings, Russell was concerned about the quality of tenants taking the opportunity to upgrade.

“Those people who took the opportunity to upgrade are now finding that those properties that they could afford, pre COVID, now might not be able to afford, and that’s a fact of life,” he tells upstart. “I wouldn’t really want any reform at the moment because it seems to be working. Quite frankly, I haven’t given much thought to it.”

Providing safety or a lucrative investment?

Unlike other investments that do not directly affect others, the onus here is on landlords to provide people with a home. Libby Porter, Professor of Urban Planning at RMIT says that the very basic human right of housing should have never been left in the hands of the private market. She says the failures in the system derive from this notion that housing is an asset to create wealth.

“It’s not about belonging, it’s not about security or safety into the future, it’s about wealth creation. That’s why all of our policy settings are geared towards getting people on the housing ladder,” she tells upstart.

Dr Sharam says that speculation and housing precarity has seen first homebuyers in particular getting squeezed out of homeownership, locking them into private rental housing. The chain reaction follows as rents get higher, increasing stress and competition on lower income households with the least capacity to compete.

“If we stop this speculation, we stop house prices from increasing which means lots of people can buy a house instead of having to rent, so they’re not held hostage to a private rental system which doesn’t cater particularly well for them, particularly if they are not on high incomes,” she says.

Twenty-six percent of Australian households live in private renting and an increasing number of them are renting long-term. This has sparked calls from housing groups such as the Renters and Housing Union (RAHU) for the Federal Government to implement urgent national tenancy reforms.

Victoria introduced new laws in March last year which attempted to further balance the favour towards tenants. Reforms that saw a ban on rental bids, a ban on no grounds eviction notices and minimum standards initiated have been long overdue for some people and provide more security of tenure. But critics say these conditions for investment into residential housing are still favourable to the investor by international standards.

At the same time, however, a Domain report found that Melbourne has a vacancy rate of 1.3 percent, the lowest since 2019 yet still the highest out of all the capital cities. Nationally, the vacancy rate is at 0.9 percent with 84 percent of Australian suburbs at record high rent rates. Finding a place to call home, let alone an affordable one is, for many, out of reach.

“The rental market continues to remain a landlords’ one with the number of rental listings declining to its lowest point on record. This means it is highly competitive for tenants and further increases in asking rents are likely,” the recent Domain report noted.

Melbourne’s weekly house rent index has grown 10.1 percent in the past year, reaching an average of $577 per week. Units on the other hand have become 20.2 percent more expensive in that time, at an average rate of $455 per week. For someone like Maddy Perry who is already spending around 50 percent of her income on rent, more increases could price her out of the private rental market.

“I think I would either have to go down to part-time uni or I probably couldn’t [deal with increased rent]. Even now it’s challenging, so if it were to go up even more then it would be really hard,” she says.

Nothing for people to fall back on

Perry falls under the bracket of people living in unaffordable housing, and that cohort has never been as big. But given the decades of neglect in maintaining and constructing new public housing, there are few avenues for people living precariously to fall back on. The waiting list for public housing in Victoria ballooned to 55,000 this year with the increase almost entirely among people with priority needs.

The waiting time is 17.1 months for people fleeing family violence, already homeless or needing to move for complex health issues. Other tenants could be left waiting years. Dr David Kelly from the Centre of Urban Planning at RMIT says that public housing has become residualised, turning into an “ambulance service for the housing market”.

“We have less stock, they’re in worse condition than they were 20 years ago and the people who live there have more issues than they did 20,30,40 years ago,” he tells upstart.

The failings of Australia’s housing sector were echoed in the Productivity Commission’s review of the National Housing and Homelessness Agreement (NHHA), a national agreement to fund states in supporting them with housing and homelessness services. Submissions to the review found that homelessness and housing has in fact become worse since the Agreement took place in 2018.

Low-income earners are spending more time renting in increasingly unaffordable housing, while young people find it harder to place a deposit on a house. And since the public housing sector hasn’t seen much growth either, people just have to make do with private rentals for now.

Author | Luke Lay is a third year Media and Communications (journalism) student and you can follow him on twitter @lukelay10.

Photo | Melbourne City from Pentridge Boulevard 2020 by Michael J Fromholtz is available HERE and is used under a CC license. The image has not been modified.