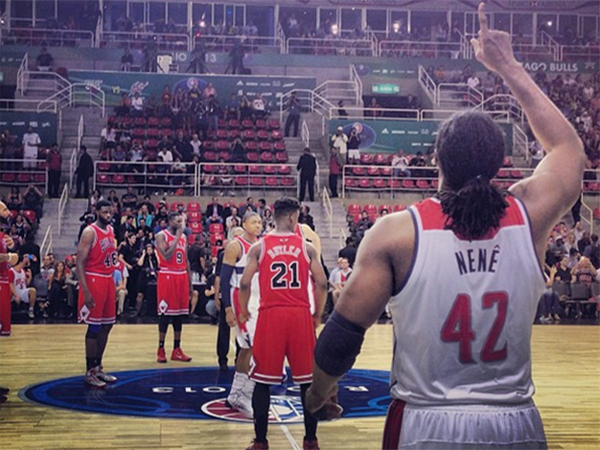 ‘Beat the Heat’ is still the motto for the league, at least for one more year. Four-time MVP Lebron James is in the prime of his career, and if Chris Bosh and Dwayne Wade can stay healthy, it’s almost guaranteed that the Heat will be making an appearance in the conference finals.

If Greg Oden can somehow manage to stay fit this year, he could be the rebounding presence that might see the Heat go back-to-back.

If the Bulls managed to grind their way to the second round of the playoffs with a skeleton crew last season, one shudders to think what they’ll do if their full lineup can stay fit. Derrick Rose is back after 18 months on the sidelines, and if pre-season is anything to go by, he hasn’t changed a bit.

Jimmy Butler took his chance to break out in last year’s playoffs, holding his own against Lebron and scoring plenty of buckets along the way. He might be the two-guard the Bulls have been looking for.

The Pacers came as close as anyone to snatching the Eastern Conference title from the Heat last season, largely on the back of Paul George’s insane performances in the NBA Playoffs. Adding Luis Scola and CJ Watson has provided them with some added firepower off the bench.

Lance Stephenson is as tough as they come, earning his spot on the lineup through grit, hard work and the sheer fact that he’s incredibly fun to watch.

After splashing money around carelessly, the Nets secured the services of Kevin Garnett and Paul Pierce in the off season to make them a true playoff contender. Managing their fitness is the key here though, so don’t expect the pair to be playing more than 30 minutes a night.

The long arms of Andrei Kirilenko will get plenty of work this season, after Brooklyn brought him in to defend against the league’s best small forwards.

Adding Andrea Bargnani to their roster in the off-season probably wasn’t the trade the Knicks desperately wanted. With Carmelo Anthony carrying them, they should be good enough to make it through to the second round of the playoffs – any further than that would be a stretch though.

JR Smith finally seemed to find his niche as an explosive sixth man last year, earning a hefty contract along the way. Expect him to be as exciting as ever, as long as he can stay out of those tempting New York clubs.

Could Cleveland finally secure a playoff spot in the post-Lebron era? All signs point to yes, as the Cavs are currently sporting the best line-up they have had in years. Kyrie Irving has well and truly earned his place as the new star of this Cavs team, which is packing enough talent at every position to pick up the sixth seed.

Acquired for next to nothing, if Andrew Bynum can stay healthy this season then Cleveland will become a real force to be reckoned with. With Bynum though everything is a risk.

Perennially underrated, Atlanta managed to snare a talented player in Paul Millsap in the off season, to help plug the void left by Josh Smith’s departure. It has a strong starting five with plenty of experience, so there’s no reason it shouldn’t make the playoffs.

DeMarre Carroll could have a massive influence on the Hawks this season if he can take advantage of his first opportunity as an NBA starter.

Washington didn’t make any major moves over the off-season, but some might suggest it didn’t need to. If its young guards in John Wall and Bradley Beal can keep up the form they showed in the later months of last season it should win enough games to snare a spot in the playoffs.

Bradley Beal found a hot-hand in no time at all last season, playing and shooting like an experienced shooting guard in the second half of the season. Hopefully he can keep maintain his fine form.

The Pistons now have a stack of great front court players after the acquisition of Josh Smith, but might struggle to find enough space on the floor to run all three of their bigs at once. Their ability to pass the rock and work together as a unit will make or break this team.

Sporting incredible athleticism for a big man, Andre Drummond has already provided plenty of highlights which suggest he’ll be the face of the Pistons in the near future.

Armed with a savvy new general manager in Masai Ujiri, the Toronto Raptors can approach the season in a couple of different ways – either pushing for a 7th or 8th seed with the team it has, or trading off Rudy Gay or Kyle Lowry to look for a top draft pick. Either way, don’t expect it to make a big dent in the playoffs.

The Raptor’s not-so-secret weapon is Jonas Valančiūnas, the seven-foot centre from Lithuania. He’s got enormous potential and now has an NBA season under his belt. Expect big things.

While it’s ‘title or bust’ for teams like the Heat or the Lakers, Herb Kohl and his Milwaukee Bucks seem content just to be mediocre. Milwaukee traded away its two best players in Brandon Jennings and Monta Ellis over the off-season, but it’s probably not that bad now to secure a bona fide star in next year’s draft.

Giannis Antetokounmpo, the rookie from Athens who had NBA managers drooling over his massive wingspan and defensive ability. He’s nicknamed the ‘Greek Freak’ for a reason.

After struggling to adjust to life without Dwight Howard on its roster last season, Orlando seem to be back on track with a young line-up this season. Sporting plenty of talent in Tobias Harris, Victor Oladpio and Nikola Vucevic, this will be another struggling season for the Magic, though there’s light at the end of the tunnel now.

Victor Oladipo is athletic, intelligent and a great defender, and is already drawing plenty of comparisons to Dwayne Wade.

While it’d probably be better over the long term for Michael Jordan’s Bobcats to tank their way into next year’s loaded draft, they’re out to prove this season that they can actually win a few games. This year will be another chance for their young squad to develop and get some wins on the board.

The Bobcats seriously overpaid for Al Jefferson and his questionable defence, but when you’re the franchise with the worst record in NBA history, you have to sacrifice to get some quality.

Celtics owner Danny Ainge ruthlessly sent two Hall of Fame players, in Paul Pierce and Kevin Garnett, off to Brooklyn on draft day, hiring the promising Brad Stevens to coach them through a rebuilding season yet again.

Rajon Rondo will probably be out for a couple more months with an ACL injury, but expect him to be on the chopping block too – he’s got enormous trade value.

It’s fortunate that the NBA doesn’t treat tanking with the same contempt as the AFL, because the 76’ers have scrapped everything they own in pursuit of Andrew Wiggins. Loaded up on future draft picks, they’ll simply be looking to get as much NBA experience into their young list as possible.

As practically the only player on the roster who can create his own shot, this season is a good chance for Evan Turner to test his mettle as the new leader of the team.