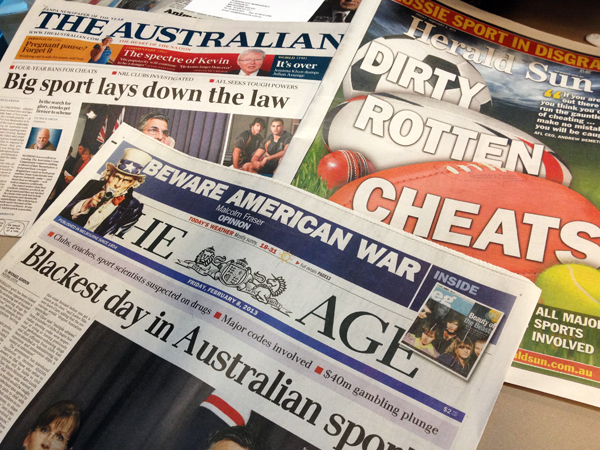 You’ve probably heard the news: the Australian media is experiencing the most serious contraction in its history.

The rise of online and mobile media has led to the collapse of the classified advertising business model that has long sustained media companies, especially in print, and this, in turn has affected their ability to fund the journalism that has long informed us.

What’s less often discussed is the considerable human cost of those changes. Last year more than 1,000 journalists in Australia became redundant: that’s around 15% of the journalist workforce.

A year on, what has become of them? How have they made sense of their redundancy experiences? And what does the disruption of so many careers mean for the future of journalism?

These are some of the key questions in a research project called New Beats that a team of researchers from four universities have been developing. Our plan is to track what happens over the next three years to the careers of journalists who became redundant in 2012.

The scale of these redundancies underscores the disruptive impact of digital communication technologies, and how news media organisations are responding to that disruption.
It also offers a unique prism through which to examine the developing relationship between what is termed legacy media (that’s the “old” media of television, newspapers and radio) and new media (online).

The difference between them is not just a matter of changing technology, as Katharine Viner, Guardian Australia’s editor recently pointed out:

Digital is a huge conceptual change, a sociological change, a cluster bomb blowing apart who we are and how our world is ordered, how we see ourselves, how we live … it is deeply profound and it is happening at an almost unbelievable speed.

To launch the project, we recently completed a pilot study that drew responses from 95 of these recently redundant journalists to find out about their redundancy experiences, its impact on their professional identities, and what kind of work they’re doing now.

In all, we contacted 225 journalists, most of who signed up for involvement on the project website, or through contacts provided (with permission from the journalists) by the union that represents journalists, the Media Arts and Entertainment Alliance.

The early findings will be presented today at the Journalism Education Association of Australia’s 2013 conference, Redrawing the Boundaries: Journalism Research, Education and Professional Culture in Times of Change, hosted by the University of the Sunshine Coast.

While our study includes journalists from all media platforms, it came as no surprise that 94% of our respondents had left print jobs, and most (90%) of those took a voluntary redundancy package.

What the survey dramatically showed, however, is how much journalistic experience has been walking out the door: the average age of the cohort is 49, more than half have departed from senior roles, and they have spent an average of just over 25 years working as journalists.

The findings highlight how harrowing the redundancy experience has been.

For many, the decision to take a redundancy package was a tough one that was precipitated by stressful and more intense working conditions, as well as concerns about the future of the industry.

Many also felt angry and frustrated with the way management handled the process. “Despite the redundancy process being voluntary, I experienced powerful feelings of rejection, which spread into my other relationships, particularly with my teenage children”, said one respondent.

More than a quarter of all surveyed said that redundancy had had a negative impact on their professional identity. As one respondent explained, panic set in immediately after the leaving the newspaper along with a loss of identity and purpose.

“My routine had been shattered. I had to find a way to motivate myself.” For another, “the hardest thing has been adjusting to life outside a newsroom”.

A year (and a bit in some cases) after taking redundancy, the paths of those journalists have diverged considerably. Of the 95 who completed the survey, 17 are now working in legacy media, and 16 in digital media.

When asked about their job titles, ten of them listed multiple titles or roles (possibly reflecting the freelance or self-employed nature of their work). These included 27 who said they were working in a combination of journalism and other roles, with three even listing “freelance” as their job title.

Not surprisingly, public relations has emerged as a common destination, with 18 of the respondents working either as media officers, media managers, media advisors, or PR officers and account managers.

When those no longer in the media were asked to describe where they are working, 14 reported that they were at universities, 12 are freelance or self-employed, eight are working in public companies and six for government and union positions.

Not everyone wanted to remain a journalist: 65% of those who had left the profession said that they had chosen to do so, while 35% said they wanted to continue to work but no work was available.

While a significant proportion of the respondents have gained a toehold in new media, less than a quarter of them said they had received specialised training.

This raises the question – to be addressed in future surveys – of how well prepared journalists are to make transitions to digital media.

A common consequence of redundancy has been lower pay, with just over two-thirds reporting that their wages were not as good.

Perhaps surprisingly, more than half said that their job conditions were now better, with only a quarter reporting they were lower.

This apparent paradox is partly explained by the absence of the kind of workplace stress they experienced in their former roles, and partly by the fact that many respondents have funded their work transition with their redundancy payout.

Many also volunteered that redundancy has had a positive effect on their wellbeing and health. As one respondent put it:

I work a lot from home, I make my own rules and decisions, and I don’t have a third of the stress I had in my last job.

This survey provides just a single snapshot of the careers of journalists whose lives are – like journalism itself – in an extended period of flux.

But with 94% indicating they’re willing to be surveyed annually over the next three years, we’re hoping to develop a much richer insight into how the collective experience of so many of our senior journalists might yet play a role in the evolution of a very different mediascape, and, indeed, in other professions too.

Lawrie Zion is an Associate Professor of Journalism at La Trobe University, and is the editor-in-chief of upstart.

The author would like to acknowledge the contribution of Merryn Sherwood at La Trobe University to this article and the New Beats team.

This article was originally published at The Conversation.