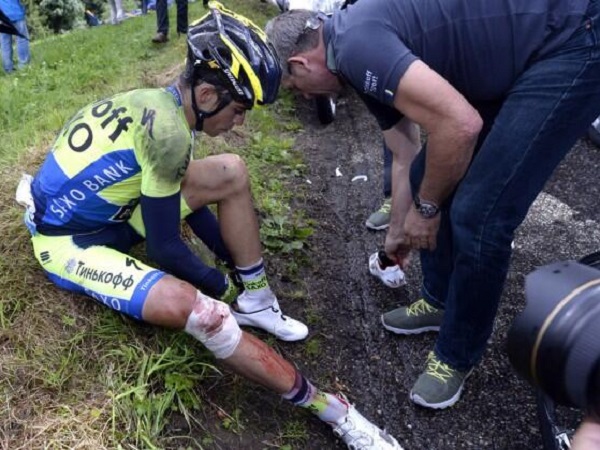 Will the Tour de France champion please stay up?

As far as opening stanzas of a grand tour go, the opening ten days of the 2014 Tour de France are among the most devastating in the races history.

The big winner is without doubt Italian Vincenzo Nibali, who is the superior General Classification contender left in the race.

His win in stages two and ten see him lead the Tour by two minutes and twenty three seconds to Australian Richie Porte, who has taken over leadership of SKY after Froome’s messy departure in the opening week.

In what has been a relatively quiet opening for the ten Australians, Porte has some cycling fans dreaming of a podium finish or better in Paris.

Porte still has a power of work to do, and will have to go on the attack if he is pull back the deficit on Team Astana’s Nibali.

The Tasmanian is somewhat of an unknown quantity, having never lead a team at a Grand Tour, despite some success at smaller events such as the 2013 Paris-Nice where he beat the likes of BMC’s Tejay Garderen.

The story of the race however is still the crashes and resultant abandonments of the two best GC contenders in world cycling.

From the moment Froome went down initially in stage four, the Tour was destined for chaos, which indeed ensued with the 2013 champion falling a further two times on a wet stage five.

Froome’s two crashes were amongst 41 on a stage that ventured onto the cobbles of northern France, and are usually only seen in the Tour of Flanders and the Paris-Roubaix classics.

Contador missed a crucial opportunity however, falling well behind Nibali on the General Classification, as the race began to move toward the mountain stages.

The abandonment of the first high profile contender Mark Cavendish, 300 metres from the finish of stage one in Harrogate, ended any hopes of what promised to be an enthralling battle on the sprints of the flat stages.

His rivalry with German Marcel Kittel is well-documented, and would have been the headline attraction of the final stage of the Champs Elysees on July 27th.

Kittel has made the most of the ‘Mansk Missile’s’ absence, taking three of the opening four stages to bring his total stage wins to seven, after four victories in 2013.

Kittel will have a further three opportunities to take stage honours, provided he can safely navigate through the high mountains of the Alps and Pyrenees.

Cavendish’s crash allowed for Australian Mark Renshaw to have leadership over Omega Pharma – Quickstep for the flat stages, where he took three top ten finishes.

The race now moves into the Alps following the rest day, and will continue to weave its way south before heading to the Pyrenees for the Tour’s final mountain climbs.

With a commanding lead over Porte and the rest of the field it is unlikely that Nibali will attack too often over the next week or so. If Porte considers himself a chance of overtaking the Italian, he will need to isolate the 2013 Giro d’Italia winner from his Astana teammates, who have rarely left his side in this year’s edition.

For the other Australians, Simon Gerrans has had a forgettable tour to date, after being brought down with Cavendish on day one. Gerrans will likely target stage 12 for a possible stage win, with a course profile that suits his punchy and combative style.

What seems key for any rider harbouring ambitions of a podium finish in Paris is in fact just staying upright on their machines.

With a tense peloton, further crashes are still undoubtedly on the horizon for the leaders of this most extraordinary edition, and still may help shape the final standings on July 27th.

King of the Mountains

Lachlan McKenna is studying a Bachelor of Journalism at La Trobe University and will be covering the Tour de France for upstart throughout the race.. You can follow him on twitter: @lachie22mckenna.