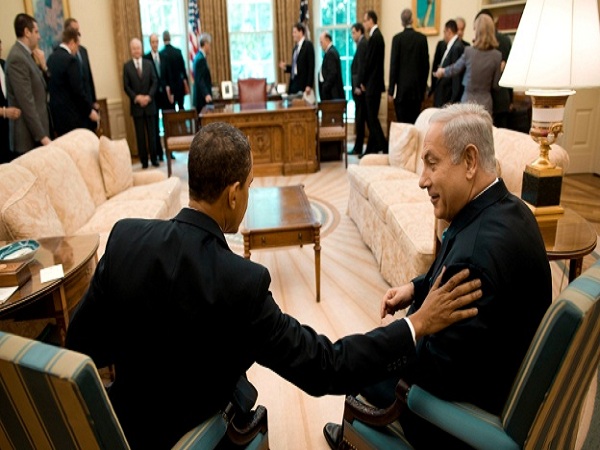 US President Barack Obama touched down last night in Tel Aviv, his first visit to Israel as president. The trip comes after Obama’s awkward first-term dealings with Prime Minister Netanyahu.

Israel is America’s closest ally in the Middle East, but the relationship between President Obama and Netanyahu can be described as icy at best. It is difficult to ignore the stern on-camera lectures and un-diplomatic open mic slip ups that have contributed to the uncomfortable air between the two leaders.

Earlier this month American political news website Politico reported, that a poll conducted in Israel showed that only 10 per cent of the population viewed the US president favourably.

PM Netanyahu must feel even uneasier to see the re-elected American president again, after backing Republican candidate Mitt Romney during the presidential election last year. A television advertisement of the Netanyahu criticising President Obama for not being hard enough on Iran aired in the key battleground state of Florida.

David Remnick, the editor of The New Yorker later wrote that the video was a way for Netanyahu “to alienate the president of the United States and, as an ally of Mitt Romney’s campaign, to make himself a factor in the 2012 election”.

Over the next few days, however, both leaders will have to try and reach agreement on a number of previously divisive issues of importance in the Middle-East.

President Obama is also expected to meet with Palestinian leaders during his visit, and may look to progress peace talks between Palestine and Israel, despite a lack of previous success in this area. Negotiations coordinated by the president collapsed in 2010 after Palestinians and Americans called for all Israeli settlements on occupied land be suspended.

Prime Minister Netanyahu is a strong supporter of Israeli settlement is the occupied Palestinian territory, a practice believed by many to be illegal.  Earlier this year a United Nations inquiry found that the settlements were in violation of human rights, and warned that if the construction did not stop, leaders would have to front the International Criminal Court (ICC).

Conversely, Israel’s parliament has just voted in the PM’s coalition government, which according to Reuters includes strong supporters of settlements.

Another issue up for discussion will be Iran. In his speech to the UN general assembly last year prime minister Netanyahu spoke about a “red line” for Iran’s nuclear program, stating that Iran would have nuclear weapons by June this year. Both Israel and the United States of America agree on taking up sanctions against Irank, but have disagreed on Iran’s present capabilities.

Considering the uncomfortable air between the two leaders, in combination with the current regional tension, the next few days will play an important role in shaping the relationship between the two allies.

Zainab Hussain Shihab is a Bachelor of Journalism student at La Trobe University and a staff writer at upstart. You can follow her on Twitter: @ZainabShihab