The Port Adelaide star becomes the first Brownlow medallist at his club. 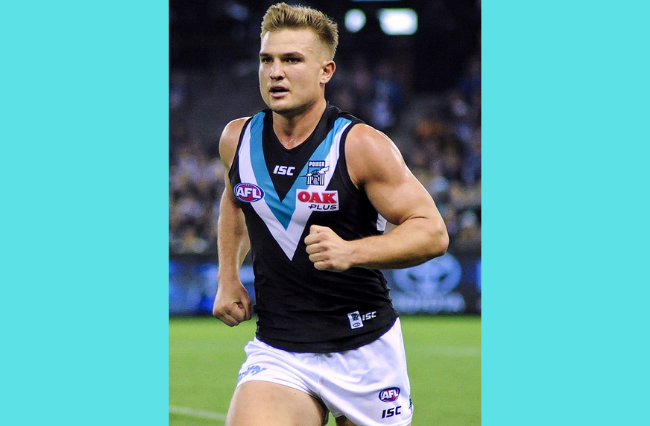 In one of the most memorable Brownlow counts in recent memory, Port Adelaide star Ollie Wines equalled the Brownlow Medal votes record as he stormed home to secure the 2021 prize.

Going into the night, Wines, Bontempelli, Oliver and Steele were the four favourites to take home the AFL’s most prestigious medal.

The lead swung around early in the count, with Wines leading on 11 votes after six rounds, chased by Bontempelli, Walsh, Parish and Melbourne’s Christian Petracca.

Bontempelli led the vote for the majority of the night after over taking Wines in round 12, but failed to poll after round 19, Wines then came charging home.

Coming down to the final two rounds of the season, both Wines and Bontempelli were level on 33 votes. Wines edged ahead with a one-vote in round 22, before sealing the award with two votes following a 34 disposal performance against the Bulldogs in the final round. Wines finished on 36 votes, three ahead of Bontempelli and equalled Dustin Martin’s 2017 count for the most votes under the 3-2-1 system.

The boy from Echuca became Port Adelaide’s first-ever Brownlow medallist. He polled in a record 16 matches, including 11 of the last 12.

The Port Adelaide star said he was still a little rattled as he was declared the 2021 Brownlow medalist.

“There are so many great players that I still look up to at my age, who have had tremendous seasons and a lot of them are playing on Saturday in the biggest game of the year, and I’m extremely envious of them,” he said.

Wines’ said he was incredibly honoured to win the award.

“I see it as more than an individual award – it is a team award,” he said on stage at Optus Stadium.

“From our playing group to our coaches to our football staff, upstairs in our buildings, to our administration staff, everyone, your work on and off the field – it definitely doesn’t go unnoticed.”

Clayton Oliver finished third on 31 votes while Sam Walsh rounded out the top four, recording 30 votes in just his third year at the elite level to make a record four players finishing with 30 votes or more – the previous record was two.

The Brownlow Medal win caps off a terrific individual year for Wines. This year he earned his first All-Australian blazer, averaging 32 disposals, five clearances and nearly five tackles a game in 2021.

For the second year in a row, COVID-19 impacted heavily on the award ceremony.

The Demons and Bulldogs were at Optus Stadium for the ceremony but watched the count in separate rooms away from the main function. There was also a function in Brisbane and other players in Melbourne and Sydney were shown on video links during the count.

Photo: Ollie Wines during the AFL round six match between North Melbourne and Port Adelaide on Saturday, 28 April 2018 at Etihad Stadium in Melbourne, Victoria by Flickered is available HERE and is used under a creative commons licence. The image has been resized.