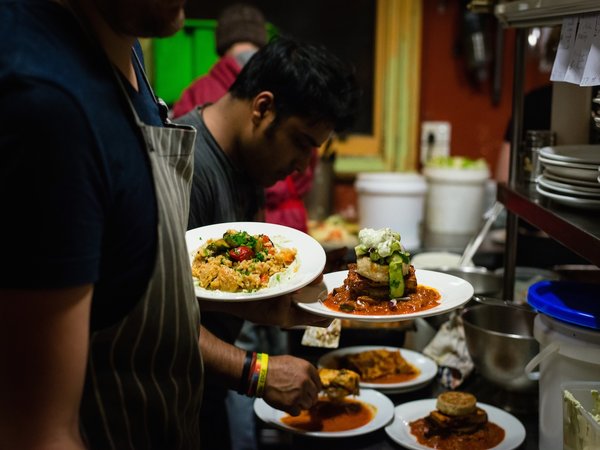 They’re Melbourne’s most humble organisation and they need your help.

Lentil as Anything offers great vegetarian food and the freedom to choose the price of your meal depending on how much you think it’s worth.

The community-based organisation, which has been running for 15 years, has established a strong social presence in Melbourne, with outlets in St Kilda, Thornbury, Footscray, Preston and Abbotsford.

All donations generated from diners go directly to local community members who are in need of additional help and support.

Their restaurant model relies on trust, generosity and respect.

Lentil as Anything seek to exist as a strong team of multicultural individuals who address social isolation while providing support and training to new migrants, refugees and youth.

By serving breakfast, lunch, dinner and dessert every day of the week, many locals are well acquainted with the not-for-profit that first opened its doors in 2000.

Owner, founder and social entrepreneur, Shanaka Fernando, who is originally from Sri Lanka, tells upstart he believes that money should bring humanity together regardless of individuals’ financial situations.

“When people eat there is a natural kinship and trust that forms,” he says. “Once people eat together, there are no ill feelings.”

The organisation relies on donations to pay for rent, utilities, wages and supplies. They want the public to know that it’s something they are willing to do in order to achieve their goal.

“It takes a lot of time and energy to keep a non-profit, pay-as-you-feel restaurant running and providing nutritious, delicious food to those who need it most,” he says.

However, Fernando says that in recent times the business has been struggling financially.

In one evening, where they managed to serve 1,500 customers, they lost over $4,000 due to underwhelming donations that did not balance in their favour.

This means that there are times when Lentil as Anything work at a loss.

Fernando says that the Melbourne community has shown a lot of support and generosity since the first restaurant opened, however he noticed a pattern of lower earnings over the last summer.

The Abbotsford Convent restaurant had to recently remind its customers to clean up after themselves after having a meal.

They said that if the grounds were continually left in poor conditions, their reputation with the Convent would be strained and could eventually result in their closure.

Joshua Archer, a 20-year-old Thornbury Lentils lover, tells upstart that the food is always culturally diverse and satisfying, and convenient for his budget.

“I haven’t donated a lot but I am hoping to donate more the next few times I go because I know that I’ll be back,” he says.

One customer, who wishes to remain anonymous, confessed to taking advantage of the system in the past while still admiring the cause.

She admitted that Lentil as Anything was a place she could go and anonymously donate as little as she had at the time and still receive a great meal.

The staff recently expressed to their supporters that a donation of $15 per person would enable their four restaurants to continue.

Although they have many generous volunteers and donors, they do not receive any funding or grants to assist their independent mission.

In their efforts to promote social justice and employ those who have been marginalised by society, Lentil as Anything has become a valued asset to Melbourne’s community.

With over 3,000 meals prepared daily at their Melbourne restaurants, they promise that your donations will help to achieve great things.

In order to help Lentil as Anything to continue its efforts in the community, please head to your local restaurant and donate wisely.

Lucille Sadek is a third year student studying strategic communications and journalism. You can follow her on twitter here.