How two friends turned their crazy idea into a national organisation. 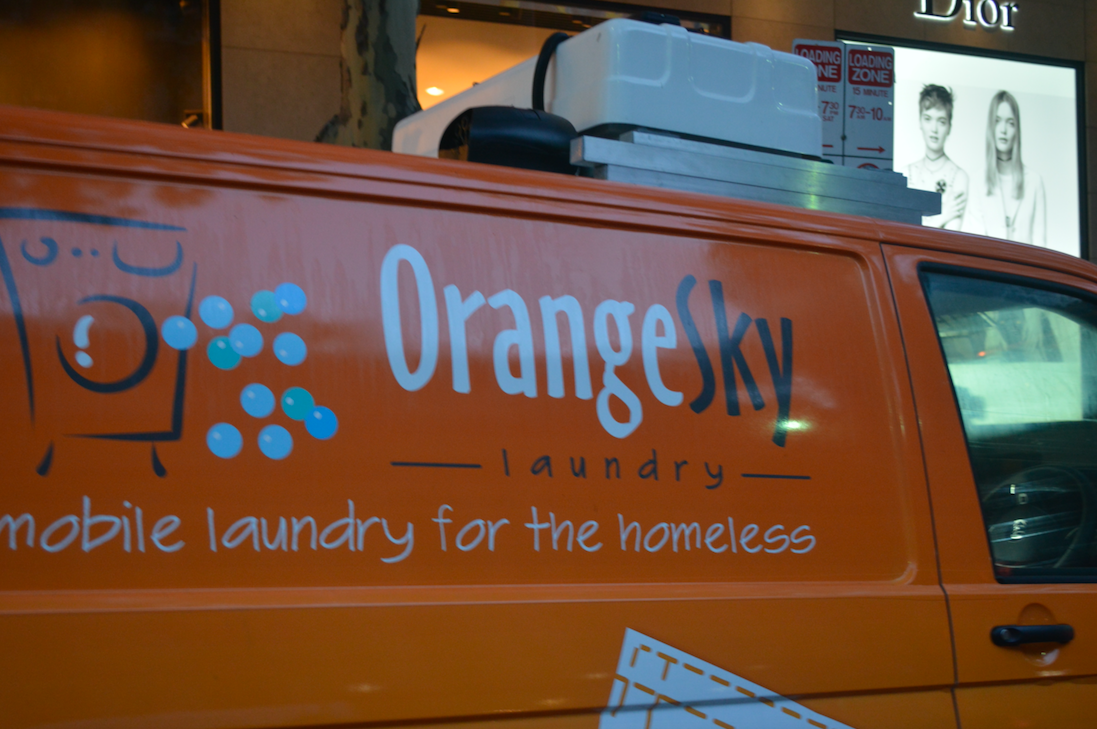 Lucas Patchett and Nicolas Marchesi – mates since their youth – decided they wanted to make a difference in the lives of Australia’s homeless and now, thanks to Orange Sky Laundry, the homeless of Australia now have a laundry.

“When we started what we really wanted to do was improve the hygiene standards of the homeless but after we hit the streets – really from the get-go – it was much much more than that,” Patchett tells upstart.

The idea was to fit their van with washers and dryers and take to the streets to wash clothes for the homeless.

Once they came up with the idea of Orange Sky Laundry it took a great deal of work to make it a reality.

It wasn’t all smooth sailing for the pair; they had a van but needed washers and dryers to get it on the road.

Every laundromat they called told them they were crazy and that their idea wouldn’t work, except for one Brisbane-based company.

“We had a meeting with their senior management team and they also said it was crazy, said it wouldn’t work, said people wouldn’t use it,” Patchett says.

“We really convinced them that no one had ever done this before and we wouldn’t know if we didn’t give it a crack.”

The first van was put together by the boys themselves – with the help of a few of their friends – and was used as a prototype on the streets of Brisbane.

Each of the laundry vans is equipped with two washers and two dryers. There’s also a generator on-board and two water tanks – one for clean water and one for grey water – which allow for two hours of washing.

“We did put it together over the course of about three weekends but we really just wanted to get out there and start helping people as soon as possible.”

There are now vans operating all around Australia, washing almost four tonnes of laundry every week.

As Orange Sky continued its work, they started gaining attention and interest from all over the nation.

In 2016 Patchett and Marchesi were named Young Australians of the Year.

“It was a really awesome acknowledgement, not only of Nic and I, but more so our volunteers and all the people supporting Orange Sky,” Patchett says.

“It allowed us to grow and to continue to help more people which, at the end of the day, is what we want to do.”

That’s exactly what they have done.

Orange Sky started 2016 with four vans and by the end of the year they had 11 vans in operation around Australia. They also have larger vans on the streets providing showers.

In addition to this, Orange Sky reported a $1.16 million profit as a registered charity, in the 2015-16 financial year.

“[Laundry] was an area that we recognised as a big gap, given our past experience with it in the homelessness space,” Patchett says.

“It’s the first thing that the majority of us are lucky enough to do in the morning: putting a fresh set of clean clothes on.”

This objective began to change once the vans actually took to the streets. 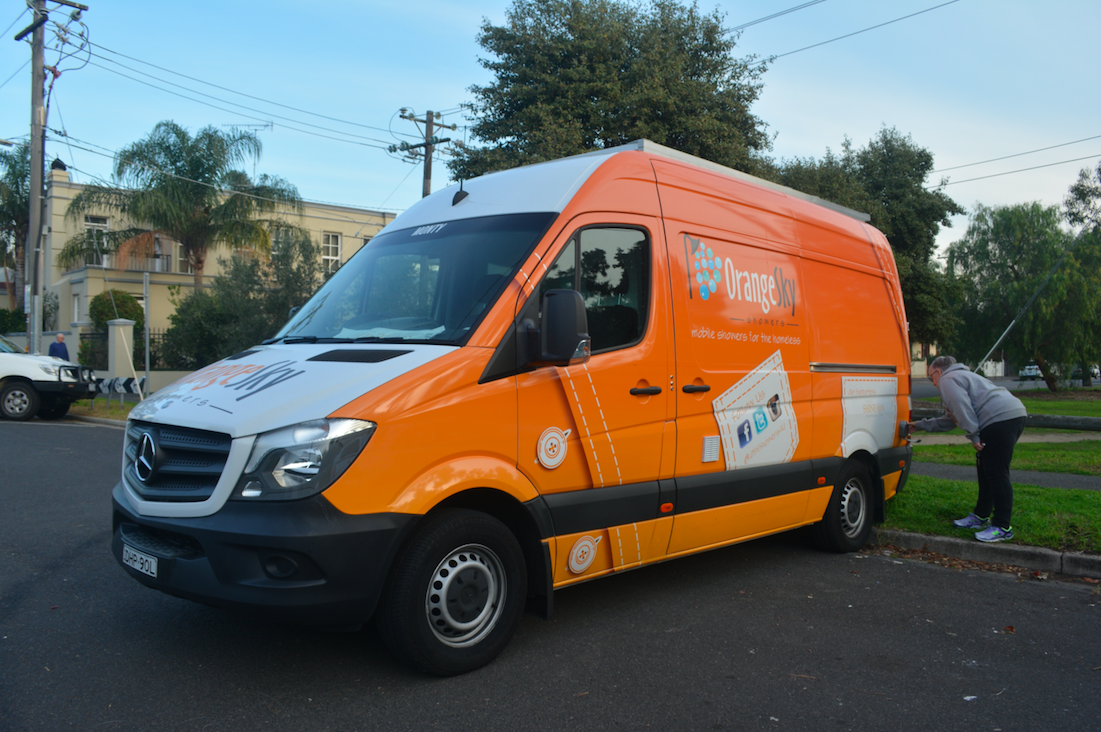 “We all, as humans, have a need to feel connected, to feel valued and part of a community,” Patchett says.

“That’s something we recognise from our conversations very early on and its something you need to be reaffirmed of every day and our homeless friends are no different.”

Although washing clothes for homeless friends is important to Orange Sky, it’s on the orange plastic chairs outside the van that Patchett says the magic happens. 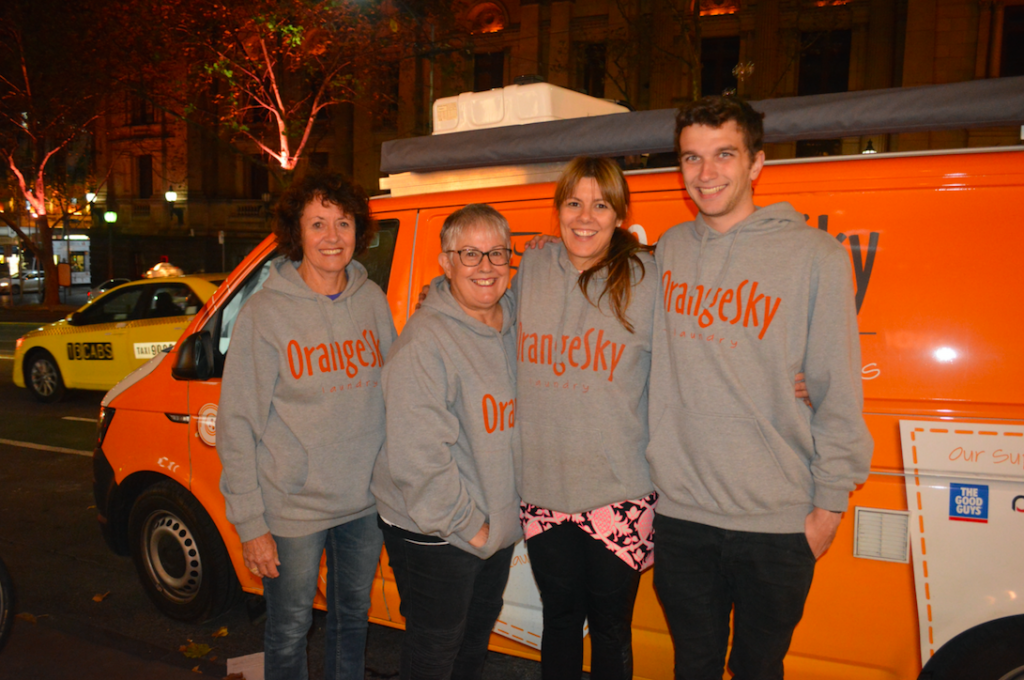 Orange Sky volunteer Bronwyn Davis-Jones believes sitting down and talking to those who come to the van is the best way to counteract the stigma surrounding homeless people.

“It doesn’t matter why they’re homeless and it’s not something that we delve into,” Davis-Jones tells upstart.

“We are there to give conversation and to wash their clothes.”

Fellow volunteer Jo Krause says conversing with their homeless friends is the best part of volunteering.

“It’s been a bit of an eye opener for me because I kind of think there’s a misconception about homeless people and they’re just very very normal,” Krause tells upstart.

According its volunteers, Orange Sky is much more than something to put on a resume.

Orange Sky relies on its volunteers to continue to function and it’s very easy to get involved.

Additionally, any donation is gratefully accepted by the team.

“It costs us 6 dollars to give someone a load of washing and three bucks to provide someone with a hot shower.”

You can jump on the website – orangesky.org.au – to make a donation and sponsor a homeless friend.