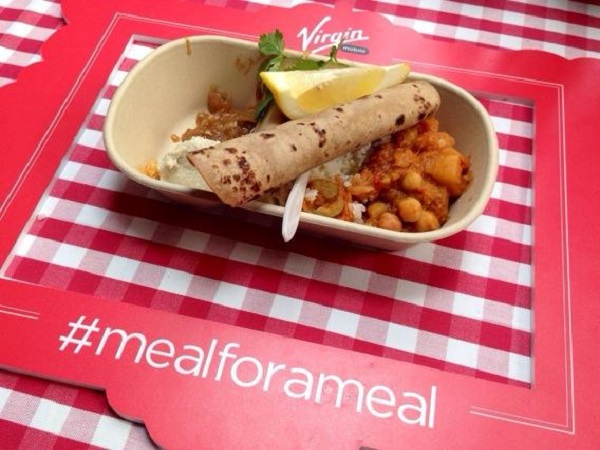 According to recent research, food photos are the third most commonly uploaded image seen on Australian social media news feeds and there are now 400,000 reasons why you too should photograph your food.

Founded by Richard Branson and sponsored by Virgin Mobile Australia, the campaign invites Instagram, Twitter and Facebook users to upload images of their food with the hashtag #mealforameal. For each picture that is uploaded money is donated to the Australian food rescue organisation, OzHarvest, which provides a real meal for someone in need.

Mr Branson launched #mealforameal a little over two weeks ago and, based on the current upload rate of approximately 2,500 images per day, the campaign could take up to five months to achieve its goal of providing 400,000 meals.

“I have always believed that business should be a force for good and #mealforameal is a great practical example of this,” Mr Branson said via his blog.

OzHarvest CEO and founder, Ronni Kahn, launched the organisation in 2004 and is Australia’s first and only food rescue program, collecting surplus food from all kinds of food providers, from supermarkets to café’s and everything in between.

OzHarvest’s second annual Think.Eat.Save events were held around Australia last week, aimed at creating awareness about the excessive amount of food that is wasted every year both nationally and world-wide. Thousands of people were fed at each event location using surplus food that would otherwise go to waste and end up as landfill.

“Our modern day challenge is to create a sustainable food culture that can be shared by all, where we waste less at all levels of food production and distribution,” Mrs Kahn said in a statement released on the OzHarvest website.

The theme for this year’s OzHarvest event was “Think.Eat.Save. – reduce your foodprint,” a motto that reiterates not only the gross level of global food wastage, but also the impact this wastage has on the natural resources used in the production of food that is then lost or wasted.

Residential and commercial food waste is estimated to cost Australian’s up to $10 billion every year and ends up being used as landfill, estimated at a staggering four million tonnes in Australia alone.

The United Nations Food Agricultural Organisation (FAO) estimates that around the world, approximately one third of all food produced for human consumption is either lost or wasted every year, an equivalent of 1.3 billion tonnes. Figures also indicate that the food wastage from rich countries alone is almost equivalent to the total amount of food produced in sub-Saharan Africa.

As members of society we must be vigilant and take action in order to combat the severe abuse of our planet’s natural resources which is not only a needless waste, but also contributes to greenhouse gas emissions, impacting the global environment and climate change.

It is essential for more programs and initiatives, such as OzHarvest and #mealforameal, to be implemented and maintained within our own homes and local communities. This need is imperative not only as a way to preserve our Earth’s resources for the future, but also to fulfil the moral obligations we each have to ensure the less fortunate among us are taken care of and provided with the basic human need for food.

In Seattle, the second phase of the Food Forest campaign is scheduled to open two acres within the seven acre site later this year. The food forest combines the native habitat with an edible garden, producing fruit, berries, nuts and edible trees that can be distributed within the community.

A similar project currently operates in Adelaide however this food forest is not a free community service; food produced by the Hillier food forest is sold at the Adelaide Showground farmer’s market on a bi-weekly basis.

By 2050, population growth is estimated to increase the food demand by up to 30%. United Nations Environment Program (UNEP) Director of Communications, Naysan Sahba has estimated that if countries can work together to reduce food wastage by at least half, then the estimated food gap could be closed by a substantial 20%.

Statistics show that in Australia, the current rate of wastage is equivalent to one in every five shopping bags of food.

Stacey Elms-King is a third-year Media Student at La Trobe University and an editor for upstart. You can follow her on Twitter: @SElmsKing