Financial success is hard to come by for artists, but Damian Cazaly loves the job regardless, writes Thomas Odell. 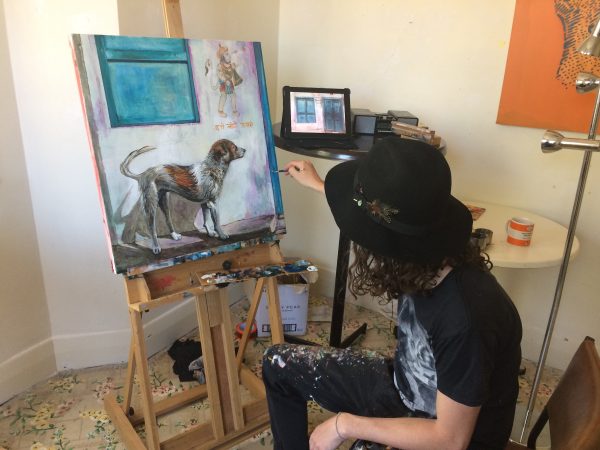 In 2008, the median income for an artist who worked full time on their creative practice was $22,500.

“People can take for granted that when they hire you, they’re doing you a favour, because you’d do it anyway because you love it.

“You wouldn’t question that with a plumber, with their work, or any of that kind of stuff.”

Originally from Tasmania, he now lives in one of Melbourne’s creative hubs, Fitzroy, just around the corner from the bustling Smith St.

“I’ve been in Melbourne for probably 12 years now,” he says.

“You’ll find that a lot of artists gravitate towards Melbourne and Sydney, just because there is a bit more of a lean towards the creative mindset.”

He only began pursuing his art full-time after ending a string of hospitality jobs.

“I’ve always been interested in art and always done it, but I never really took the leap until I was in my late twenties,” he says.

“I still do a few hours of [hospitality work] because it connects me to the community and is a good way of getting inspiration.

Cazaly’s works vary in size, and he says motivation can come from anywhere.

“Capturing an essence of something I see, or just capturing the world around me, and the energy or the psychology behind that as well,” he says.

“I’ve found Instagram to be a really good tool for following artists and getting a sort of quick fix inspiration.

“Casey Weldon, the paintings he’s putting up are just incredible … and Diego Rivera’s probably the most influential one just for his scale.”

He recently visited India, and found inspiration for his current painting of a stray street dog.

“I think probably just happening to be present (in the moment) the majority of every day … I had to be aware of my surroundings because it was all pretty new and a very different culture and definitely a lot more chaotic,” he says.

“So that was something I really took a lot from.”

Of his extensive range of artworks, his biggest achievement was having a piece in the Gallipoli Art Prize last year.

The piece, Killing Time, featured alongside 38 other finalists.

“It was the 100th anniversary of Gallipoli, and to get that in that year of the art prize was really good,” he says.

“I worked as an extra on Gallipoli, the TV series, so it was good to paint a scene that I’d experienced with the extras, just sitting around in the full Anzac kit, so that was really good, kind of combining an experience of mine into something as iconic as Gallipoli.”

He says the most rewarding part of his job is when his work starts to come together.

“A lot of paintings, for a lot of the time that you’re painting them, look shit,” he says.

“Just because you’re building up layers, getting a perspective, so once it really starts taking a form and the light and shadow really starts popping out that’s when the real enthusiasm kicks in.”

To check out Cazaly’s range of artworks, visit his website.

Thomas is a second year Bachelor of Journalism (Sport) student at La Trobe University. You can follow him on twitter: @tomodell18