AFL boundary umpire Patrick Jackson speaks about how he first got into umpiring and how he deals with the pressure that umpires face in Australian Rules Football. 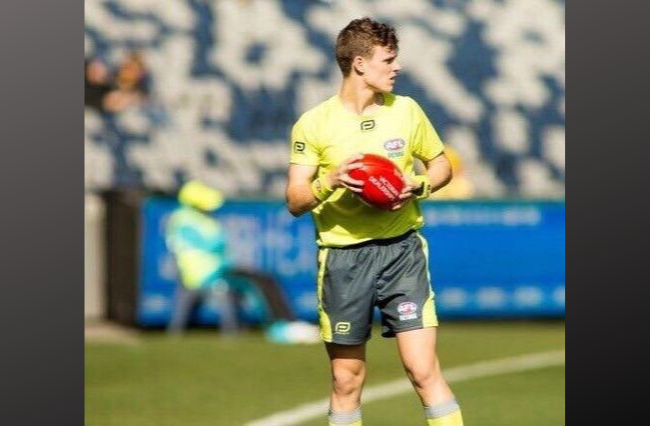 Being an AFL umpire isn’t an easy profession, dealing with constant pressure and a lack of support from crowds. However, walking out onto the largest sporting stadium in Australia every weekend is something young umpires all around the country could only dream about.

Patrick Jackson is living that dream as an official boundary umpire for the AFL in front of crowds of up to 80,000 people. And he is one of those rare people who love the pressure that comes with the job.

“In those moments, it’s so hard not to smile because there’s so much build-up. That’s the best thing about AFL umpiring it’s the best seats in the house,” Jackson told upstart.

He first began umpiring in Canberra with the short-term goal of just making a bit of money. But with his strong athletic abilities and love for the game, Jackson’s performances didn’t go unnoticed.

“In 2013, one of the head AFL coaches said that this guy’s the future of AFL umpiring after one of my NEAFL games and that was probably the moment I realised that this was within my reach,” he said.

After umpiring four NEAFL Grand Finals and the 2017 VFL Grand Final, AFL boundary umpires head coach Simon Leigh called to tell him he would be umpiring his first game at the elite level.

He missed the all-important call from Simon Leigh at work while he was on a bathroom break at the myotherapy clinic he was working in.

“I didn’t think I got in because it was so late, it was like December.”

“I rang him back thinking this could be it and then the words come out, ‘congratulations you’re a part of the AFL umpiring list for 2018’. It was like fireworks I couldn’t speak it was such a weird feeling it was my life goal to get onto the AFL list,” he said.

Before walking out onto the MCG for the Round 1 clash between Hawthorn and Collingwood, the biggest crowd Jackson had umpired was the 2017 VFL Grand Final. The crowd was a touch over 17,000,  whereas the Round 1 match at the MCG had a crowd of 58,051.

“The crowd roaring. It’s Round 1, the siren goes, the crowd lifts. I was so nervous and jittery but it was such a good feeling,” he said.

The atmosphere from an AFL crowd is exactly what Jackson appreciates about his job. The bigger the crowd though, the more likely an umpire will be abused. For Jackson it’s not something that affects him, instead, he thrives from the noise of the crowd.

“As much as we get abused and all that stuff it’s just noise and it’s how you take it. I love it. I love the atmosphere. I love getting abused, it’s one of my favourite parts.”

“I embrace the crowd, when there’s a big play down the wing I use that crowd to keep me going. It makes you run faster” he said.

The role of a boundary umpire forces Jackson to read the play as if he was playing in the match himself.

“When you are umpiring you’re reading the play as if you’re a player so with the boundary you have to be a step ahead of the game. You have to look to see where their options are because you’ve got to make a judgement of where you run.”

While dedicating time to his umpiring career, Jackson has also had to juggle weekly training and matches along with his university studies.

Jackson has completed a course in myotherapy and is currently studying at La Trobe University completing a bachelor of Health Sciences.

“I’m really interested in paramedicine and it can relate back to umpiring, critical decisions, under pressure sort of environments, I love high-pressure team environments,” Jackson said.

Jackson is hoping to be selected to umpire an AFL Finals series over the next few years.

“My initial goal is to make finals. Things can happen very quickly it’s about qualifying for finals. You just have to nail your opportunity,” he said.

A combined love of running, umpiring and the game of football itself has helped Jackson reach the elite level of boundary umpiring. For young men and women who are considering a career in boundary umpiring, he has this piece of advice.

“Do it if you love the game and love running. You’ve got to have some interest in running. It’s worth it in the long run. It’s a pretty long road and it’s a matter of getting those opportunities and nailing them.”