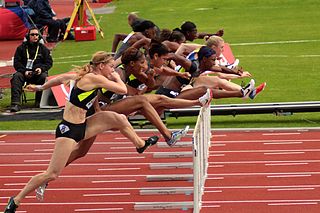 Sally Pearson has struck gold at the 100 metre hurdles in the World Athletics Championships in London, cementing her position as the new world champion.

Pearson, who missed the last three years of competition due to injury, crossed the line at 12.59 seconds defeating her long time rival American Dawan Harper-Nelson, who won silver with a time of 12.63 seconds.

“Every single emotion that you can hold in your body just came out when I crossed that finish line. It wasn’t surprise, it wasn’t shock. I was just proud, so proud of what I had done to get here,” Pearson told the Age.

“I certainly wasn’t the fastest in the field today but I definitely beat the fastest and I am the world champion.”

It was her first world title since 2011, after earning silver at the Moscow World Athletics Championships in 2013 and her current success adds to one of the more remarkable comebacks in the sport.

Pearson has had a rough history with injuries; which include a shattered wrist, multiple calf and achilles problems and some hamstring woes.

Pearson parted with her coach Shannon Hannan after the World Athletics Championships in Moscow and had a brief stint of coaching herself at the 2016 Rio Olympic Games.

“I never doubted it, she knows her body. She has been doing it more than long enough. She has got the determination that whatever she sets her mind to she is going to do it and she is going to do it properly so there were never any doubts about her achieving her dreams.” Australia coach Craig Hilliard told the Age.

Pearson now has her sights set on the Commonwealth Games in the Gold Coast in 2018.