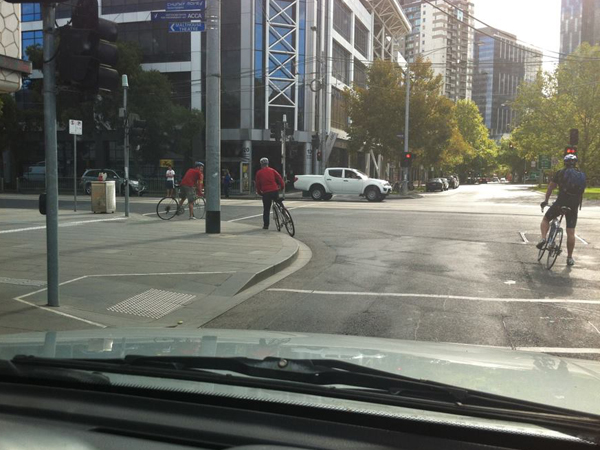 With incidents not only occurring in recent days, but in recent years involving cyclists and motorists, there is a continued lack of awareness of road rules from one side or the other.

The issue once again came to the fore last week, after a taxi had pulled over to a curb in the city, no more than a foot between it and the sidewalk, and a cyclist was “doored” as she tried to squeeze through the tiny gap.

A furor has since erupted with people on both sides of the argument. Do cyclists get separate rules in traffic? When are they to blame? There is a lot of grey area that needs to become more black and white.

At the end of the day, bicycles are considered vehicles and must adhere to the same road rules as drivers.

The problem is that neither drivers nor riders completely understand the intricacies of bicycle road rules. And how can they? The current amount of infrastructure for those travelling around by pedal is vast.

According to the VicRoads bicycle road rules, “bicycles are considered to be vehicles and riders must obey traffic signals, stop signs and give way signs”.

The only exception to this rule is that children under 12 years of age and their adult supervisors are allowed to use the footpath.

Unfortunately there are instances where this does not occur and riders fluctuate between the role of rider and the role of pedestrian. This is not only dangerous but against the law.

However, they are not the only ones at fault. There is also incompetence shown on the part of the lawmakers.

Bicycles are expected to follow the road rules when some roads are logistically impossible to accommodate cars, motorcycles, buses, trucks and trams, as well as bicycles.

This uncertainty surrounding who can do what turns into unwarranted frustration and then develops into counterproductive road rage, which has no place on our roads.

Considering bicycles were once the most common form of transportation and is now seen as a greener alternative to cars, it is irresponsible for these inconsistencies to continue.

Standing in the heart of Melbourne’s arts precinct, the intersection of St Kilda Road and Southbank Boulevard, the lack of respect shown by both drivers and riders is hard to comprehend.

In a 30 minute period between 1:40pm and 2:10pm on a Wednesday afternoon, there were close to 30 riders that failed to obey the road rules. 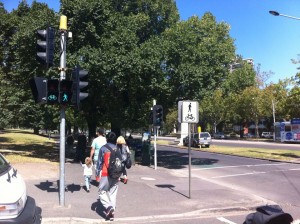 But during this 30 minute period it was becoming more apparent that riders were confused due to the configurations of the chosen location.

Riders would transition from lane to trail and vice-versa.  They would use pedestrian lights and traffic lights. Cue confusion.

It seems like a rushed operation, local councils have tried to adapt to the increased number of bicycles on the roads, but this is not the only intersection in Melbourne that exemplifies inadequacies.

So what is the solution?  It is easy to poke holes in a problem but hard to find an answer.

The state government must invest in superior infrastructure that will assist both riders and drivers to coexist on the road.

A decision has to be made whether bicycle lanes should be produced on all roads, because shifting between lanes and trails is surely not acceptable anymore.

Bicycle riders should have to go through a compulsory education program that goes beyond the Bike Ed delivered in primary schools.

Similarly to those wishing to use cars on the road, perhaps cyclists wishing to use the roads should have to pass a test as well. A test that ensures that safety and obeying the law is the absolute priority for those riding bicycles among dangerous, deadly cars.

The education programs should supply literature to potential riders, explain the current rules in place and identify specific areas that may cause confusion.

Riders should perhaps have their own demerit point system implemented, whereby they are issued with infringements for disobeying the road rules.

This may be seen as unfavourable to some, but if it means society sees less accidents involving bicycles, then it would be worth it.

Mutual respect between drivers and riders is paramount to the ultimate goal – keeping our roads safe for all who use them.

Sean Munaweera is a third-year Bachelor of Journalism (Sport) student at La Trobe University, and a staff writer for upstart. Follow him on Twitter: @sean_muna