While the movement disorder is known in sporting circles, it seems artists are also prone. 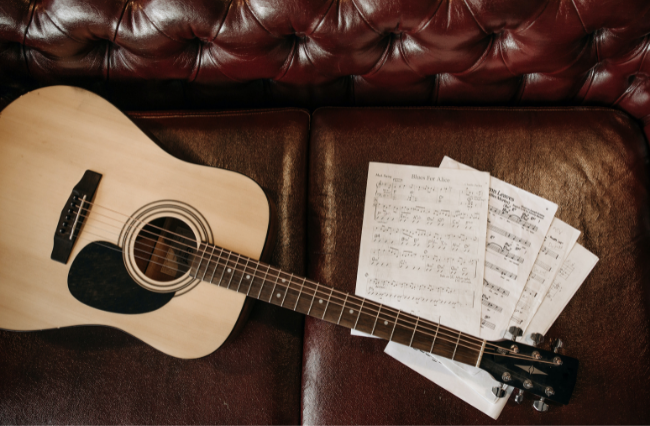 “I remember just looking at this cue sheet and I didn’t know what it meant. I had no idea.”

Classical guitar player Anita Stevens had been practising for three weeks leading up to their school performance when suddenly they could no longer decipher the symbols on their cue sheet. Thinking it must be a case of messy handwriting, they quickly switched to the original sheet music.

“I didn’t recognise it… I just remember staring at the sheet music going, ‘I don’t know what I’m doing’. I’ve been playing for six years, and I’ve got no idea what any of this means,” they tell upstart.

Stevens describes the feeling as losing a pathway in their brain. Now, many years later they recognise what happened to them as a case of the “yips”.

The phenomenon of the yips has cropped up in the media over the years, including at the recent Tokyo Olympic Games, where a case saw US athlete Simone Biles withdraw from the gymnastics all-around final. Defined as a psycho-neuromuscular impediment affecting the execution of fine motor skills during sporting performance, the yips are often reported in athletes such as golfers and baseballers. But it’s not only sportspeople who are affected; an increasing number of performing artists are beginning to recognise the symptoms of the yips as that of their own performance struggles.

The yips appear differently in various people across disciplines, from involuntary muscle spasms whilst performing a well-practised skill to complete disorientation when executing a familiar sequence of movements. Referred to as the twisties in gymnastics, lost move syndrome in trampolining and target panic in archery, the effects of the yips can be difficult to overcome, occasionally triggering the end of an athlete’s career. In some cases, the dangers presented by the yips can be severe. In Tokyo, Simone Biles completed only one and a half twists of the vault apparatus instead of the expected two and a half, an unintentional error that could have led to serious physical injury.

Ex-gymnast turned professional pole dancer, Kitty Jane, first noticed her signs of the yips as a teenager during high-level gymnastics training. As an adult, it has crept into both her pole performance and training.

“It’s like a new belief or an idea will pop into my brain. And once it’s there, it’s like whatever is steering the ship is now steering it in a different direction and I can’t overcome it,” she tells upstart.

“The block comes into place and now my body can no longer physically do it … And even though it makes no rational sense, [my] brain is now living by that new standard.”

Possible causes of the yips have been closely linked to public self-consciousness, anxiety and perfectionism. Sports psychology lecturer, Dr Fleur van Rens, specialises in the mental health of circus artists and athletes. She believes there is scope to extend on the current research and explore how it applies to performing artists.

“As far as I’m aware, research regarding the yips has mostly focused on the causes of the yips and performance outcomes. There is a need for more research to investigate the relationship between yips and mental health,” she tells upstart.

Dr Van Rens also speculates that the implications of the yips on mental health would vary across different artists, depending on how closely their identity is connected to their craft.

Pressure appears to be a common contributing factor to those affected— a 2006 study on lost movement syndrome in trampolinists traced the start of the syndrome to a gradual increase in pressure, leading to negative emotional reactions and self-presentation concerns. Kitty Jane thinks her case of the yips is triggered by pushing herself beyond enjoyment.

“When something becomes arduous and it becomes a repetitive task, suddenly you’re not really tapped in and you’re not doing it for the right reasons- you’re doing it because you have to. And I think that leads to the disparity between mind and body,” she says.

Dancer Evana de Lune’s childhood gymnastics training ended abruptly after a bout of the twisties on the trampoline left her effectively “benched” by her coaches. Due to concerns for her safety, she was barred from practising any moves requiring her to be disconnected from the floor.

At the time of her first accident, De Lune says she was feeling incredibly overworked and lethargic, facing competing external pressure from both her gymnastics coaches and her dance teachers.

“I was doing my somersault and I got halfway to mid-air and was completely lost and freaked out. [I] seized up and ended up landing on my neck on the side of the trampoline,” she tells upstart.

“[After that] I would freak out mid-air anytime I would try…I was too afraid to do more tricks, not because I thought I would fall, but because when I got that mid-air feeling I just felt terrified.”

Those who are affected by the yips often experience stigma and criticism, as their symptoms can be easily misidentified as nerves or stage fright. This was the case for Simone Biles, who was labelled a quitter on social media.

According to De Lune, the stigma runs deeper than just the yips.

“I think there’s a stigma around people giving up,” she says.

Experiencing the yips can be incredibly unnerving, and for Lola Montgomery, it pushed her performing arts career in a completely different direction. As a classically trained flute player nearing the end of her degree, Montgomery had finished her exams and was preparing for the end-of-year performance when suddenly she could not make the flute produce sound.

The technique of blowing across the flute with your mouth is called “embouchure” and is a foundational skill for flautists.

“It’s like the first thing you learn. And [on] this day, I couldn’t get the tension in my mouth to actually do it,” she tells upstart.

Feeling disheartened, Montgomery decided not to pursue her flute playing any further, instead moving into a career in burlesque performing. Since then, she occasionally incorporates the flute into her performances, crediting her ability to still play to changing the context around her flute practice.

“I think flute had become a very formal and stressful environment that was very focused on technique and very strict,” she says.

“I tried to loosen it up and syncopate it and that actually went okay… It was more improv, more freedom, more interpretive than specific. I think that’s how I overcame it.”

Kitty Jane has also developed techniques to manage her yips in pole practice, taking a scientific approach that includes dissecting moves, using visual spotting and slowing her actions down.

“I think I’ve got better tactics now to handle it so I can actually break things down better to regress into a point where I can reteach my brain that it’s okay,” she says.

But others like circus performer Richard Sullivan, are still searching for ways to overcome the yips. Sullivan has been struggling with the movement disorder since 2015, and the phenomenon affects him in a very specific way—his left hand holds on too tightly when he juggles five clubs in a cascade pattern.

“[My hand] chokes on the club a bit … it doesn’t release at the right point. So, I’m often releasing late, which means the club from my left hand goes backwards towards my right shoulder instead of in front of my body. So, then I end up stepping backwards and having to move around a lot,” he tells upstart.

When researching his condition via articles and YouTube videos, Sullivan came across many suggestions for how to combat the yips. But the solutions, which include changing your grip in golf or taking a step back from the three-point line in basketball, could not be translated to juggling because Sullivan’s juggling technique is linked to a base pattern.

“Changing [my grip] at this stage would, I think, have more catastrophic repercussions than just leaving it.”

While individual experiences of the yips are subjective, the sharing of stories can bring validation to performing artists who have unwittingly been struck down by the yips during their careers. Lola Montgomery believes there is a lack of acknowledgment of the yips in the performing arts field and that greater awareness would be very beneficial, especially in more technical disciplines.

“If there is more awareness of it, then there might be techniques that can come into play to avoid it,” she says.

“We could be losing a lot of talent.”

Photo: Brown Acoustic Guitar on Black Leather Couch by Pavel Danilyuk is available HERE and used under a creative commons license. This image has been resized.

Article: Hanne Grant is a Master of Strategic Communications student at La Trobe University. You can follow her on Twitter @HanneGrant_