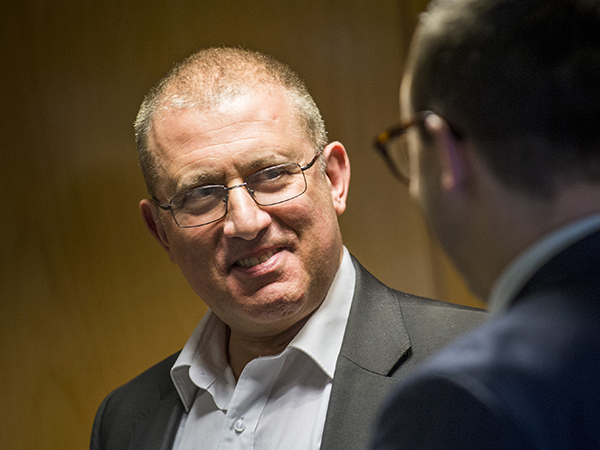 “One of the gratifying things about journalism is that you are talking about things that matter.”

In the uncertain and ever changing landscape of digital media, Lawrie Zion perfectly summed up the raw beauty of journalism in one mere sentence.

A man who has been a pioneer in the fields of journalism and academia, Zion has shown an adaptability and flexibility which has seen him seamlessly bounce from one idea to the next, leaving an indelible footprint on Australian media along the way.

Zion descends the stairs of an unusually full lecture theatre at La Trobe University. Painting a picture of comfort in his blue jeans and shirt, he is ready to divulge the details of his life to a crowd of attentive and eager first-year journalism students. Zion exudes a warming modesty; an endearing quality for someone who has been as successful as he has.

Another step in a career which has seen him entertain and engage audiences for nearly two decades, Zion is celebrating the release of Ethics for Digital Journalists: Emerging Best Practices, a book he co-edited with American media ethics scholar, David Craig.

Surprisingly, Zion reveals that the catalyst for the book was in fact an intriguing ethical question he received from a student after one of his classes.

“There was no completely clear answer. So, I started trying to read up on things that were happening in journalism ethics that related to digital media,” he says. “One of the problems we were facing teaching law and ethics to journalism students was we were actually not necessarily accounting for how young people were using the media.”

“We reached a point where in a lot of digital media that the ethical principle was quite clear, but how to deal with it was not clear.”

“I felt that this was something that was under explored in the literature about journalism ethics.”

The book provides Zion with yet another milestone in a career which can be impeccably described by two words: trailblazing and outstanding.

Growing up in the suburb of Hawthorn, Zion knew from an early age that his life would not be constrained to one path.

“I embraced at an early age that I wasn’t going to do just one thing in life,” he says. “I never thought that success has to be defined in one particular career for decades at a time.”

In a bid to gain the attention of his “larger than life” father, Zion developed a keen interest in the stock market and horse racing at tender age of six.

“I thought one strategy I should develop is to get interested in something that he gets interested in. By the time I was eight, every Saturday morning I would go to dad and say ‘here’s your tips for the day’ before he went to the races. I think that’s how your passion for things get started.”

But despite spending time studying the form guide and checking stock prices, it was Zion’s underlying passion for music which shone through.

“Music was my hobby, my whole kind of life,” he reflects.

“When I got to Year 12, as a form of relaxation, I would play the piano for a couple of hours a day.”

Zion was able to combine music with his academic studies, embarking on a PhD examining the pop music scene of Australia in the 1960s during his time at Monash University.

Upon deciding on a topic for his thesis, it was a few wise words from Hunters and Collectors front man Mark Seymour that encouraged Zion to follow his passion.

“If you go and do an honours thesis, make sure it’s a topic you are passionate about, otherwise it is really difficult to get through all the different requirements and hard slog of a thesis,” Zion recalls.

“That’s the only advice I ever give people when they are thinking about a thesis.”

Zion’s zest for music has left an everlasting footprint in Australian musical culture. His masterful creation, the Triple J Hottest 100, will forever be synonymous with a few beers and a barbeque on a fine Australia Day.

But when a Sydney man sent in his countdown votes in the peculiar method of ten rolled up joints, Zion dealt with the situation in a way which made his students proud.

“I was very protective of them,” he says with a mischievous smile, before sending the theatre of students into raptures when admitting that he “verified” the content of the joints.

As head of La Trobe University’s journalism discipline, Zion possesses a profound influence on the way journalism is taught and at the university.

The creation of upstart has seen Zion pioneer a change from the previously “ludicrous” methods of assessment, to providing students with valuable publication experience during their degree.

“I really felt that one of the problems with the Journalism degree [at La Trobe] is that there was very little opportunity to get work published while you were here,” he says.

“If you don’t do that, then you’re not really preparing students for anything,”

“It’s one of the things I’m proudest about here; the fact that we got this [upstart] up at all and the fact that it has kind of worked how I imagined it.”

Through his research project New Beats – a long term study designed to track the lives of journalists made redundant over the last three years – Zion displays an admirable sense of modesty and compassion for his counterparts who have suffered from the rise of digital media.

“I really admire journalists; anyone who can work well in that profession is generally very smart, very switched on to what’s going on in the world and very responsive,” he says.

“I’m really interested in to what happens to these individuals…we don’t want to lose what they’ve got to offer.”

“If you can graduate from three years being able to write really well, being able to evaluate critical ideas, being able to interview, knowing how to research and use social media, then you’re very employable.”

After trailblazing through the world of journalism with incredible humility, Lawrie Zion is the perfect man to pioneer the new wave of Australian journalists through the digital age.

Andrew Dimopoulos is a first-year Bachelor of Journalism (Sport) student at La Trobe University.  You can follow him on Twitter: @AndrewDimo.