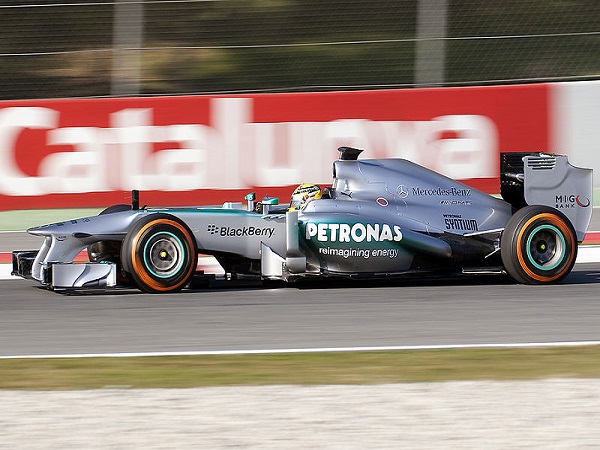 The desire to be the fastest in Formula 1 is a quality shared by all 22 drivers in the field, but simply being the quickest on the track has lately proven to be as useful as sunglasses in the rain.

Fernando Alonso may have steered his Ferrari to a 32nd career victory in front of his adoring fans in Spain last Sunday, but it was the ongoing deceitful qualifying performance of Mercedes which has the Formula 1 world in a buzz.

For the third consecutive race, the Brackley based outfit managed to snare pole position ahead of usual favourites Red Bull, with Nico Rosberg spearheading a Lewis Hamilton 1-2. However, in similar fashion to the previous round in Bahrain, Rosberg dropped back to finish sixth, while Hamilton fell ten places to come home in 12th and out of the point scoring positions.

While many predicted the calamitous result in Bahrain was a mere one-off – due to the extreme tyre temperatures – it seems a trend is emerging in poor race day pace. In fact, the tyre degradation issues which have plagued Mercedes for over three seasons appeared worse than ever during the Spanish race, as both drivers were continuously told to conserve their rubber to avoid a dreaded five-stop strategy.

Hamilton was so frustrated after being passed by Pastor Maldonado mid-race, that the Brit exclaimed over the team radio: “I’m being passed by a Williams” in a bid to share his disappointment with his team.

Incredibly tough day today but your comments really help. Thank you for all your support & for always believing in me. Much love

Rosberg was not any happier; the German was relegated off the podium after Alonso, Sebastian Vettel and Kimi Raikkonen all swooped past in quick succession.

The only positives for spectators to take from a Mercedes pole position is that it will inevitably bunch up the field, causing a train to queue behind the silver arrows. On lap 11 in Barcelona, the top 13 cars were split by just 15 seconds – a time gap that Sebastian Vettel has frequently managed to pull out to his second place rival.

Mercedes have proven to the Formula 1 public that a single lap pace is not a true representation of long run speed. Martin Brundle believes that for a team to be quick in qualifying, the trade off on race pace is even greater; despite Mercedes’ boss Ross Brawn declaring their tyre issues were resolved over the three week break, it is quite clear they are not.

The situation at Mercedes is quite unique, with Rosberg becoming the first driver in the history of the sport to finish outside the top five after starting from pole in Spain.

The Malaysian Grand Prix has been the only event in season 2013 where Hamilton and Rosberg have made up positions from their qualifying grid slots, with the pair finishing in third and fourth respectively. Aside from that anomaly, Sundays have seen a string of tumbling back through the field, meaning they are unable to capitalise on Saturday afternoon performances.

Perhaps another strong qualifying effort from Mercedes will see higher gains in Monaco – at a street circuit that is notoriously difficult for overtaking. Ferrari rival Fernando Alonso feels that Mercedes should be favourites to win the illustrious Monte Carlo race.

“They have been on pole the last three races and it’s difficult to overtake in Monaco, so maybe they can keep good positions for longer,” said Alonso.

With no points awarded on Saturday, one thing is certain: if Mercedes want to keep tabs on Red Bull, Ferrari and Lotus in the world championship, they need to make race pace gains, pronto.

Jake Michaels is a second year Bachelor of Journalism (Sport) student at La Trobe University. You can follow him on Twitter: @JMichaels193